standing at a six-way
crossroads
in the withered grass
–Issa

Most temples and shrines offer omikuji: delicate slips of paper predicting your luck to come. For a small fee you can draw a slip which contains predictions ranging from daikichi to daikyo (great fortune to very bad luck). If you tie your paper slip around a tree in the temple grounds, good fortune will come true or bad fortune can be averted. Some of the larger temples such as Kyoto’s Kinkaku-ji (Golden Temple) offer omikuji in English.

Another way to garner good fortune on a shrine visit, is to write your wishes on an ema wooden plate and leave them at the shrine to hope they come true. Most people wish for good health, business and exam success or love.

Temples came along with the import of Buddhism from China around the 6th century. At first, temples resembled those in China closely in features, such as having wide courtyards and symmetrical layouts. Some of the oldest surviving temple buildings exhibiting these features can be found in Nara, in particular at Horyuji (the world’s oldest wooden structure), Todaiji (the world’s largest wooden structure), Yakushiji and Kofukuji. Asukadera, located about 25 kilometers south of Nara City, is considered the oldest Buddhist institution in Japan.

As time passed, temples were increasingly designed to suit local tastes. Newly introduced sects from the mainland contributed to new temple architecture styles. Temples began to exhibit less symmetrical features, and many started to incorporate gardens in their compounds. Temples were also founded in more remote places and in the mountains, which had more varied layouts owing to complex topographies. Like shrines, temples buildings were also lost over time, and the ones that exist across the country today are mostly a few centuries old. 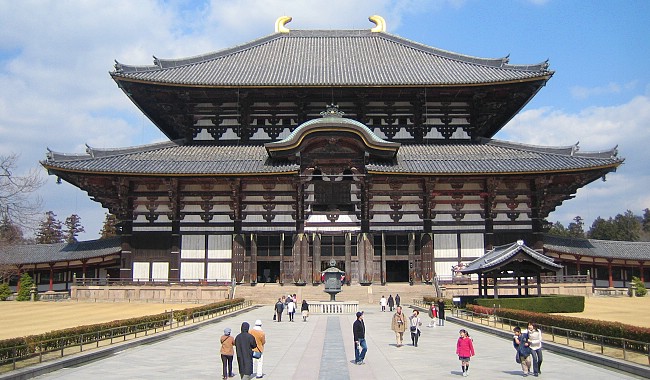