Under full blossom––
a spirited monk and
a flirtatious wife
–Bashō

Noh is the oldest existing form of theater, and though it can seem very inscrutable, it has enjoyed something of a revival recently in Japan. The main reason has been the growing popularity of a new young generation of stars. Most visible among them have been Izumi Motoya, often referred to as the Prince of Noh, his sisters Junko and Miyake Tokuro, and Nomura Mansai. Izumi Junko was the first female Noh performer ever and obviously attracted a lot of attention. (See venues below) 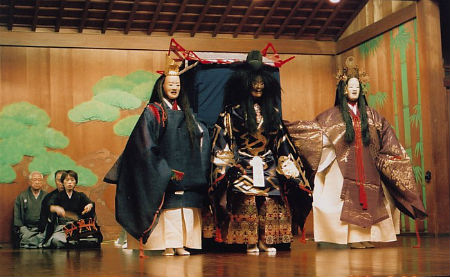 Center stage in a noh play 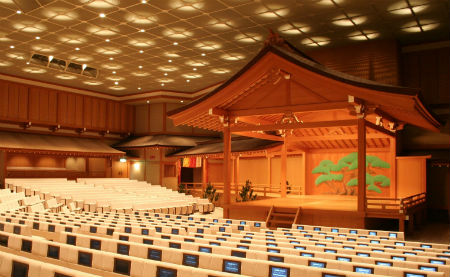 Noh grew during the 14th century out of combination of Chinese performing arts, known as sarugaku, and traditional Japanese dance called dengaku. Acting troupes were under the patronage of shrines and temples and their performances were as much ‘sermons’ as entertainment. Noh‘s present form dates from around the end of the 14th century when the main playwright/actors were Kannami and his son Zeami. Having performed for the Shogun Ashikaga Yoshimitsu (1358-1408), they received his sponsorship and reached a higher social status than actors had ever achieved. Zeami wrote many plays which are still performed today, including the classics Takasago and The Well Curb (Izutsu) and his ideas on zen and theater form the very basis of noh. In a sense, noh represents the austere Buddhist way of life adopted by the aristocracy, while kabuki represents the more earthy, animistic Shinto philosophy.

During the century of civil war (1467-1568) the shogunate had little time for cultural distractions but the rest of the populace embraced them. Noh, together with other art forms, the tea ceremony and Buddhism, spread throughout all levels of society. When peace returned, so did the patronage of the Shogun, this time with renewed enthusiasm. Hideyoshi and later Ieyasu celebrated their coming to power with noh performances.

In an effort to keep noh as the exclusive property of the aristocracy, commoners were forbidden to learn the music and dance of noh. But toward the end of the Edo Period (1600-1868), as the military class began to lose their grip on power, noh and kabuki became increasingly popular among the people. Government subsidy stopped with the fall of the shogunate in 1867 and members of the nobility assumed the role of sponsor. Although it suffered as a result of the reforms carried out during the Meiji Period (1868-1912), it maintained enough support and private sponsorship to survive and even flourish.

Most performances are indoor but the stage (butai) retains its original, outdoor design complete with pebbles and small pine trees. In a typical scene, the shi-te is the principal actor (center stage), supported by a companion, the tsure (stage left) and a secondary actor, the waki (far right).

The performance is accompanied by three or four traditional musical instruments, such as the tsuzumi drum and shamisen, and a chorus of six or eight people. Each performer has his prescribed place on the stage. The progress of the play can be determined by the positions of the two main actors.

The character of the main actor is created with a combination of masks and elaborate costumes. He is the last to arrive on the stage, appearing from the darkness and entering along the hashigakari, or bridge behind the main stage. He wears at least five layers of clothing, creating a larger than life presence. Often, he will change his mask mid-performance to reveal his true self. Scenery is practically non-existent but props play an important role. Chukei (folding fans) in particular are used to represent objects or to express actions. The performance is a combination of song, dialogue, music and dance. Both classical prose and poetry are used and are beyond the comprehension of most Japanese. But, as in kabuki, the story is already familiar to the audience and the it’s the atmosphere and underlying aesthetic that is important. 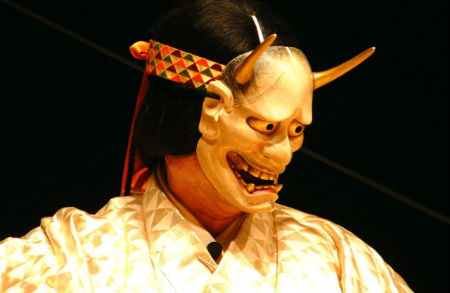 Types of Plays
There are five categories of noh plays. In order, these feature gods, warriors, beautiful women, miscellaneous (notably mad-women or present-time) figures, and supernatural beings. During the Edo period, a full day’s program consisted of the ritual piece Okina-Sanbaso followed by one play from each category in the above order. One Kyogen play would be presented between each noh. Of the five categories, the women plays are the slowest in tempo but the most poetic, and of the highest level in expressing yugen, an aesthetic term suggesting quiet elegance and grace, and subtle and fleeting beauty.

Characters
The main character of a noh play is called the shite (pronounced sh’tay) who sometimes appears with one or more companion characters called tsure. In many plays, the shite appears in the first half as an ordinary person, departs, then appears in the second half in his true form as the ghost of famous person of long ago. The former is called the maejite and the latter, the nochijite. They are traditionally performed by the same actor. The secondary actor, the waki, is often a traveling priest whose questioning of the main character is important in developing the story line. He also often appears with companion waki-tsure. An interlude actor called ai or ai-kyogen also often appears as a local person who gives further background to the waki, and thus to the audience, in order to understand the situation of the shite.

Chorus
A chorus called jiutai, usually consisting of eight persons, sits at the side of the stage, functioning to narrate the background, and the story and its mood. It also sometimes describes the character’s thoughts and emotions or even sings lines for the characters.

Instrumetalists
Instrumentalists known as hayashi sit at the back of the stage. They consist of a transverse flute (nohkan), an hourglass-shaped drum held at the shoulder (kotsuzumi), a slightly larger hourglass-shaped drum placed on the lap (okawa or otsuzumi), and a barrel-shaped drum placed on a small floor stand and played with two sticks (taiko). The rhythms and melody of these instruments follow highly prescribed systems.

Movement
A performance of noh is not a performance of realistic theatre. Rather, its movement is highly stylized and prescribed. While some gestures have specific meaning, others serve as an abstract aesthetic expression to convey the emotions of the main character. All of noh can be described as dance. Sometimes there is very little movement as dramatic tension is built mainly through narration. At other times there is strong, vigorous movement. Movement takes place sometimes to the singing of the chorus or sometimes to purely instrumental music. In general, deliberateness, brevity, suppression and abstraction are important features of noh movement.

Masks
Makeup is not used in noh. Rather, delicately carved masks are often used by the shite main character and/or the tsure attendant. These masks are considered objects of superb beauty as well as powerful means of expression. In general, any character being portrayed which is not a middle-aged man living in the present will wear a mask. Therefore all characters portraying women and old men wear masks as well as supernatural beings such as ghosts, deities, demons, and divine beasts. In general, masks either have a more or less neutral expression, or portray a very strong emotion. The former, in fact, allows the mask a variety of expressions with the play of light and shadow on it as the actor changes slightly the tilt of the mask. Even in roles in which an actor does not wear a mask, the sense of a masked face is evident. This is called hitamen, literally “direct mask.” For this, the actor does not use his face for realistic expression but rather for mask-like expression. The waki secondary character or accompanying wakizure never wear masks as they are meant to be middle-aged men living in the present-time of the play.

Costumes
Costumes in noh are elaborately made with gorgeously dyed silk and intricate embroidery. These costumes reveal the type of character being portrayed and follow prescribed conventions as to their use. Still, there is much variety. The detail of design, the color combinations, the richness of texture, and the strength of form give noh its visual impact. All characters, whether rich or poor, young or old, male or female, are beautifully costumed. The costuming process is complex. Rather than the actor putting on his own costume, two or three costumers are needed to sculpt the costume on the actor.

Stage
The main part of the stage used in noh is a curtain-less square with a bridge way leading to it from backstage. At the end of the bridge way there is a hanging curtain which swings up and back allowing the characters to enter and exit. Stages were traditionally outside and covered with a long sloping roof. From the late 19th century, they have been mainly moved indoors. These inside stages are open on two sides in a kind of semi-theater-in-the-round. There is no attempt at designing a realistic stage set. Rather, only symbolic stage properties are used. The pine tree painted on the back wall of the stage represents the tree through which noh was, by legend, passed down from heaven to mankind. In Japanese culture, the evergreen pine has come to be an important symbol of longevity and unchanging steadfastness.

Space and Time
In general, the use of space and time is not portrayed realistically. Rather, there is a freedom of portrayal which requires the audience members to use their imaginations. Characters take only a few steps and through their song or that of the chorus, the audience knows that they have travelled a great distance. Two characters may appear on the stage nearly side- by-side, but again the audience comes to understand that they are not yet in each other’s presence. While this may be confusing for the first time viewer, for many people who come to understand these and other conventions, noh creates a much more powerful theatrical expression than realistic theater.

See Noh Performances
Yamamoto Nohgakudo
http://www.noh-theater.com/english/eng_welcome.html
Kongoh Nohgakudo
http://www.kongou-net.com/
Kyoto Kanze Kaikan
http://www.kyoto-kanze.jp/
http://noh-kyogen.org/en/nohgaku-info/kyotokanzekaikan/
Kyoto Takigi-Noh
I especially enjoyed this, although it is important to get their early and stand in line.
Takigi-noh is a special Noh performed on an outdoor stage. Here, takigi (firewood) is placed at each corner of the stage. Then after dusk, the takigi is lit.
Date: June 1-2
Time: 5:30pm to 9pm
Place: Heian-jingu Shrine
Access: 10-minute walk from “Higashi-yama” Station on the Tozai Subway Line. 15-minute walk from Keihan Railway Sanjo Station
Tel: 075-771-6114