Chado – The Way Of Tea

When you hear the water splash into the tea bowl,
the dust in your mind is washed away
–Sen no Rikyu 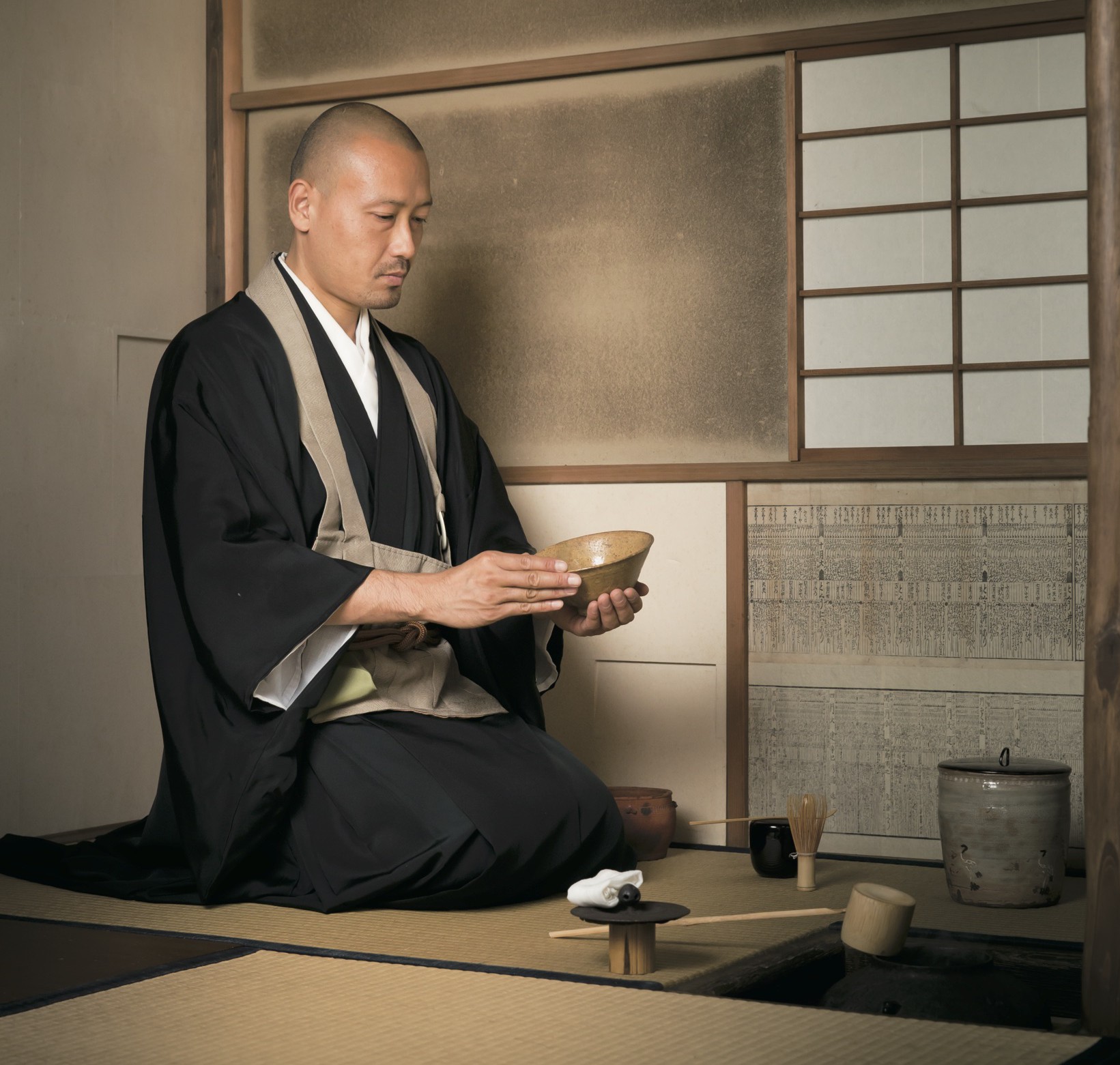 Kenin Magami, tea master, began the practice of tea ceremony formally about fifteen years ago. As the son of a Buddhist priest, Keinin had been drinking matcha (the powdered green tea used in tea ceremony) since he was a child, and tea had always been part of his life, but it wasn’t until his father built a replica of Jo-an, Urakasai’s tea house , that Keinin became seriously interested in tea ceremony. Keinin was still at university at the time, and while he had already made the decision to become a Buddhist priest, he lacked conviction about his future. With his father serving as head of the Urakuryu school of tea ceremony and having reconstructed an historic teahouse, Keinin came to realize that he was likely to be headed in this direction eventually. The fact that Keinin’s father Ninko was a nationally renowned calligrapher in addition to being a Buddhist priest also had a big influence on the son. “While he is both my father and my instructor, as a man he is also my rival. I will never reach the level of my father in the calligraphy world. That’s why I want to try to master a different field to my father.” Keinin says this is what spurred him to begin tea ceremony. We asked Keinin what tea ceremony is to him. Taking some time to think, he replied quietly “Tea ceremony saved my life.”

No matter who we are, we all have ups and downs in our life. Sometimes things go well, and other times they just don’t go right. Keinin says that at a time when his life wasn’t going so smoothly, sitting in zazen meditation and performing the tea ceremony enabled him to let go of the unpleasantness, the difficulties, and the personal problems confronting him.

“Even now when I perform a tea ceremony, I do it with feelings of gratitude. Not towards anyone in particular. It’s a ritual for offering gratitude for everything: for the people there in the tea house with whom I’m sharing the tea, for the fact the we have this opportunity to commune, and for the tea itself. So while it is on a personal level, all the tea I make is ‘tea of gratitude’.”

Salvation and gratitude. Transcending even the aesthetics of the tea ceremony, the tea made by this Buddhist might be a “silent conversation” held deep down in his heart. 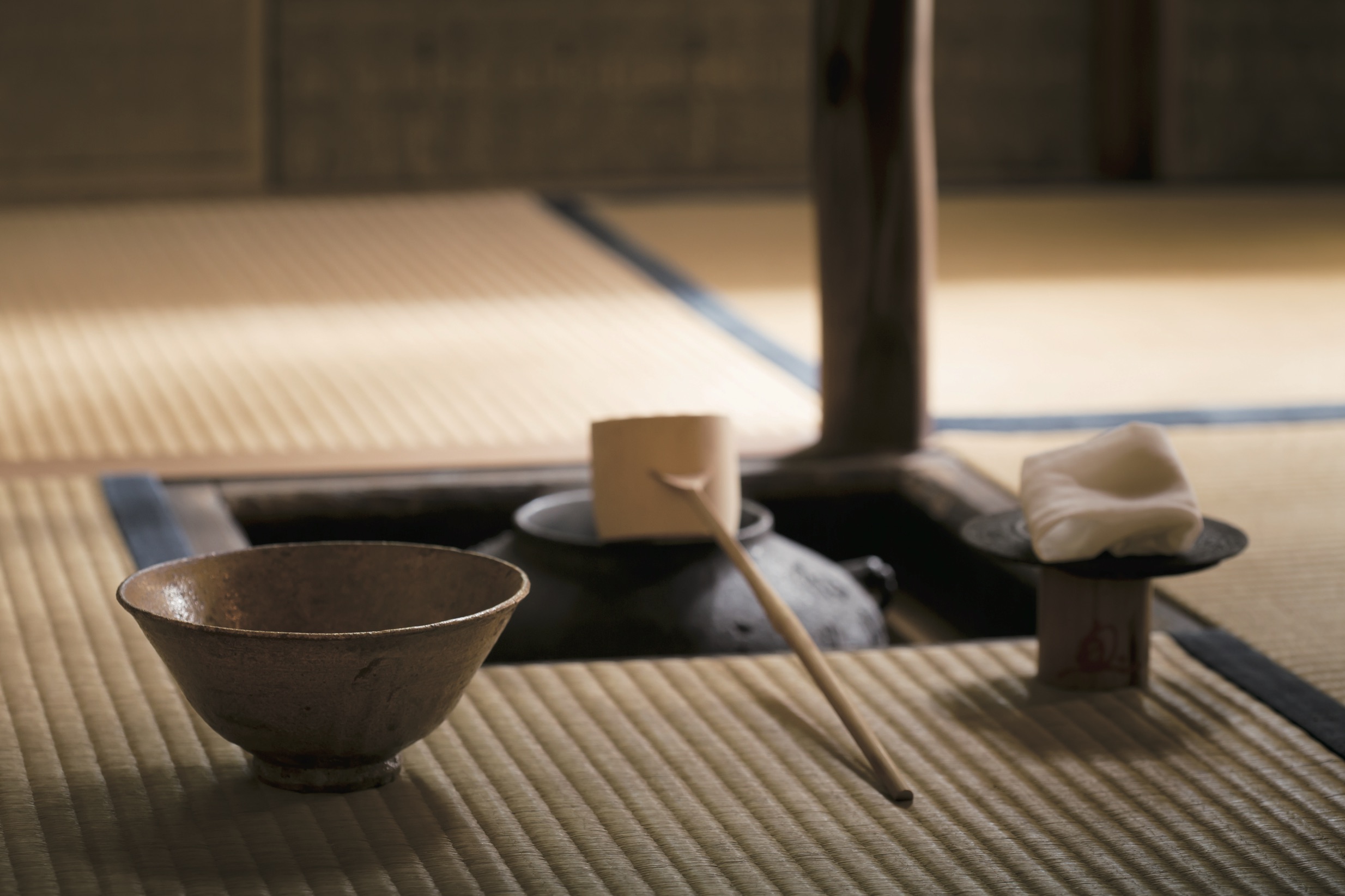 Salvation and gratitude. Transcending even the aesthetics of the tea ceremony, the tea made by this Buddhist might be a “silent conversation” held deep down in his heart.

The Buddhist priest’s love of tea, captured in the phrase Zencha Isshin.

Zen and tea ceremony have much in common: the proscribed movements Zen tea rituals and tea ceremony, the austerity of a Zen temple and the drawing room of a tea house, the ritual washbasin for “purification”, and the silent meditation that requires no words. Furthermore, it’s no exaggeration to say that phrases most used to describe tea ceremony ichi-go ichi-e(literally “one time, one meeting”) and wasei seijaku(literally “harmony, respect, purity and tranquillity”)- come from the Zen spirit. And the phrase “Chazen ichimi” (“Zen and Tea Ceremony are the same”) articulated by the grand tea master and proponent of the development of tea ceremony, Sen no Rikyu, clearly shows that tea and Zen are inseparable.

On the other hand, the Zen Buddhist priest Keinin taught us the phrase Zencha isshin (literally “Zen and Tea, one heart”). These are the words of the present chief priest of Kennin-ji Temple, Taigan Kobori. Keinin explains the intent of these words saying “For a tea master tea is everything, but for a Zen Buddhist priest, tea is simply one part of Zen”. He says that the world of tea ceremony is one world within the infinite world of Zen. 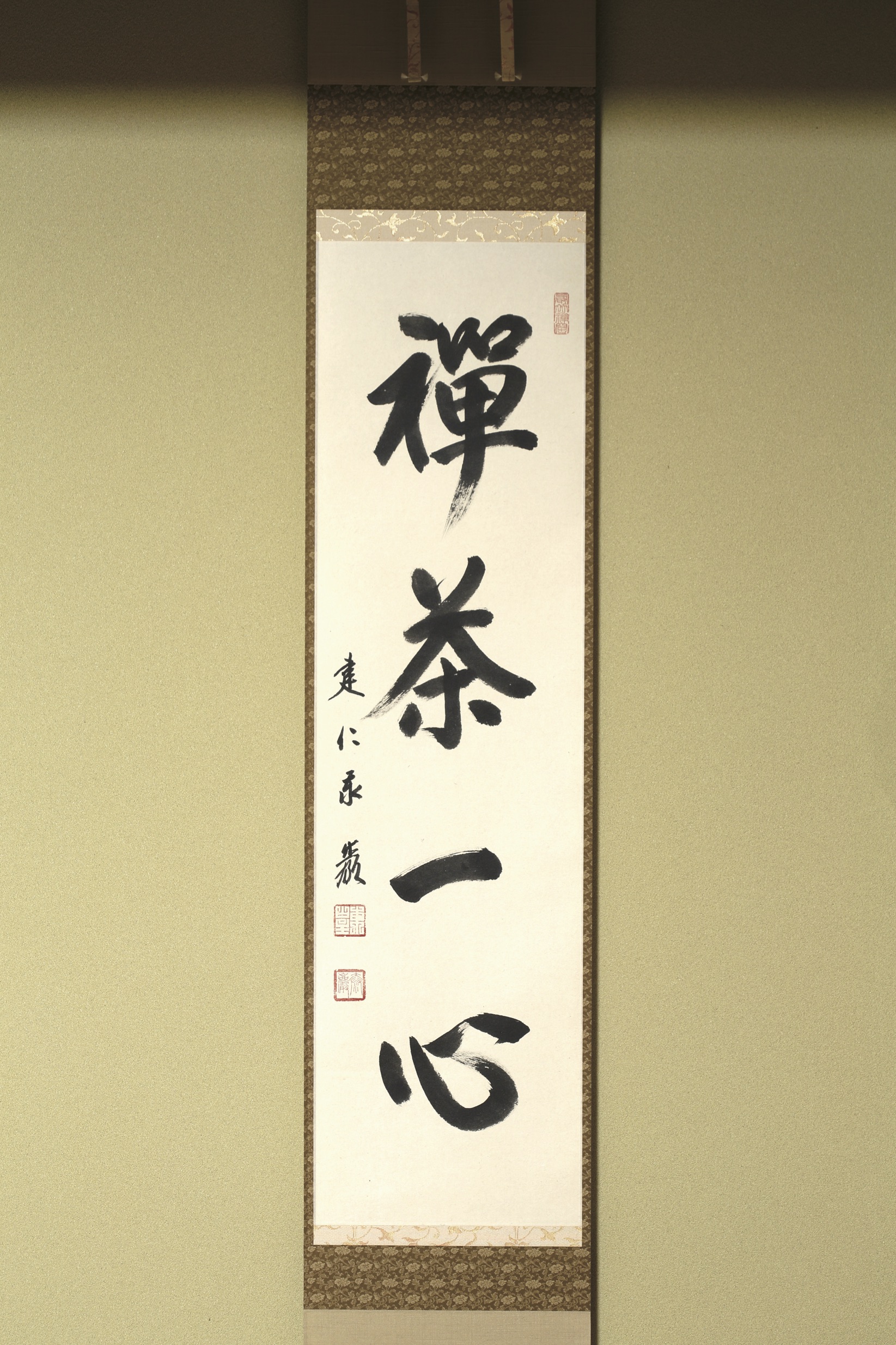 “What is important is not shape, but heart. Of course, tea made in accordance with proper etiquette is refreshing. But I believe that tea made with a careless heart, tea that is tea in form only, even when made according to the etiquette, will not move the hearts of guests.” He says that jikishin, an honest and sincere heart, is of the utmost importance. We see a glimpse of the silent and strong will fitting of the man who is both a tea master and a monk of the tea ceremony’s roots, Zen Buddhism.

Abounding with touches of Urakusai Oda’s genius, the celebrated tea house Jo-an is designated as a national treasure. The uraku windows lined with thin pieces of bamboo, the walls covered with wallpaper of old lunar calendars, and the unrefined alcove post that appears to be freshly cut are all famous features. The most unique characteristic of the tea house is the diagonally placed walls of the alcove. This design has the function of enabling the host to proceed smoothly from the entrance to the guest’s seats, but even more importantly, highlights the unrefined alcove post and gives the room a sense of added depth, making it feel larger than it actually is. Although the tea house at Shoden Eigen-in is a replica, the detailed beauty left by Urakusai can still be thoroughly appreciated. Incidentally, one theory says that Urakusai was an ‘underground’ Christian (who were persecuted in Japan at this time) and thus named the tea house Jo-an after his baptismal name of Johan. There is another story of hidden images of Christ in the triangularly-placed alcove walls. 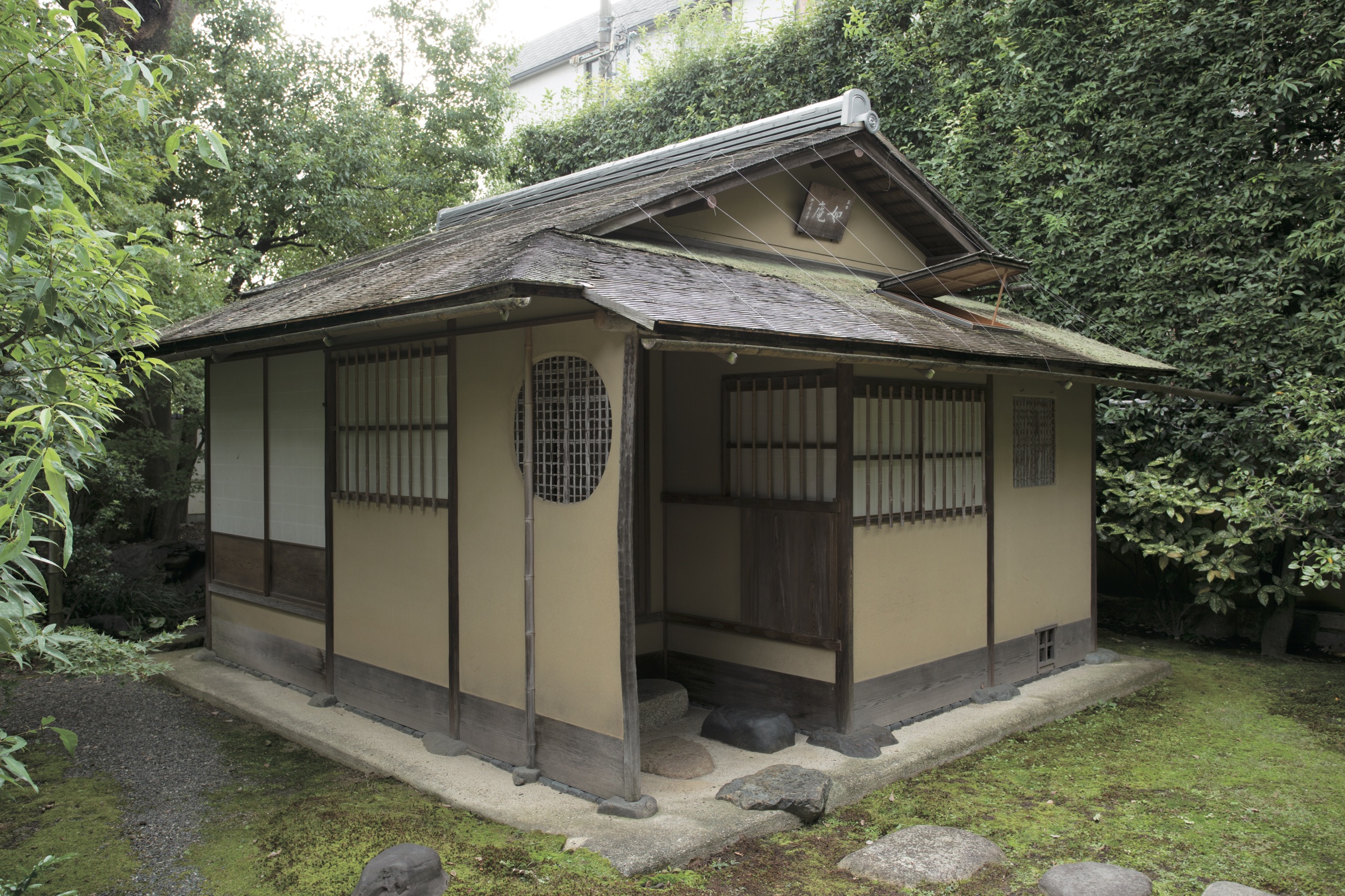 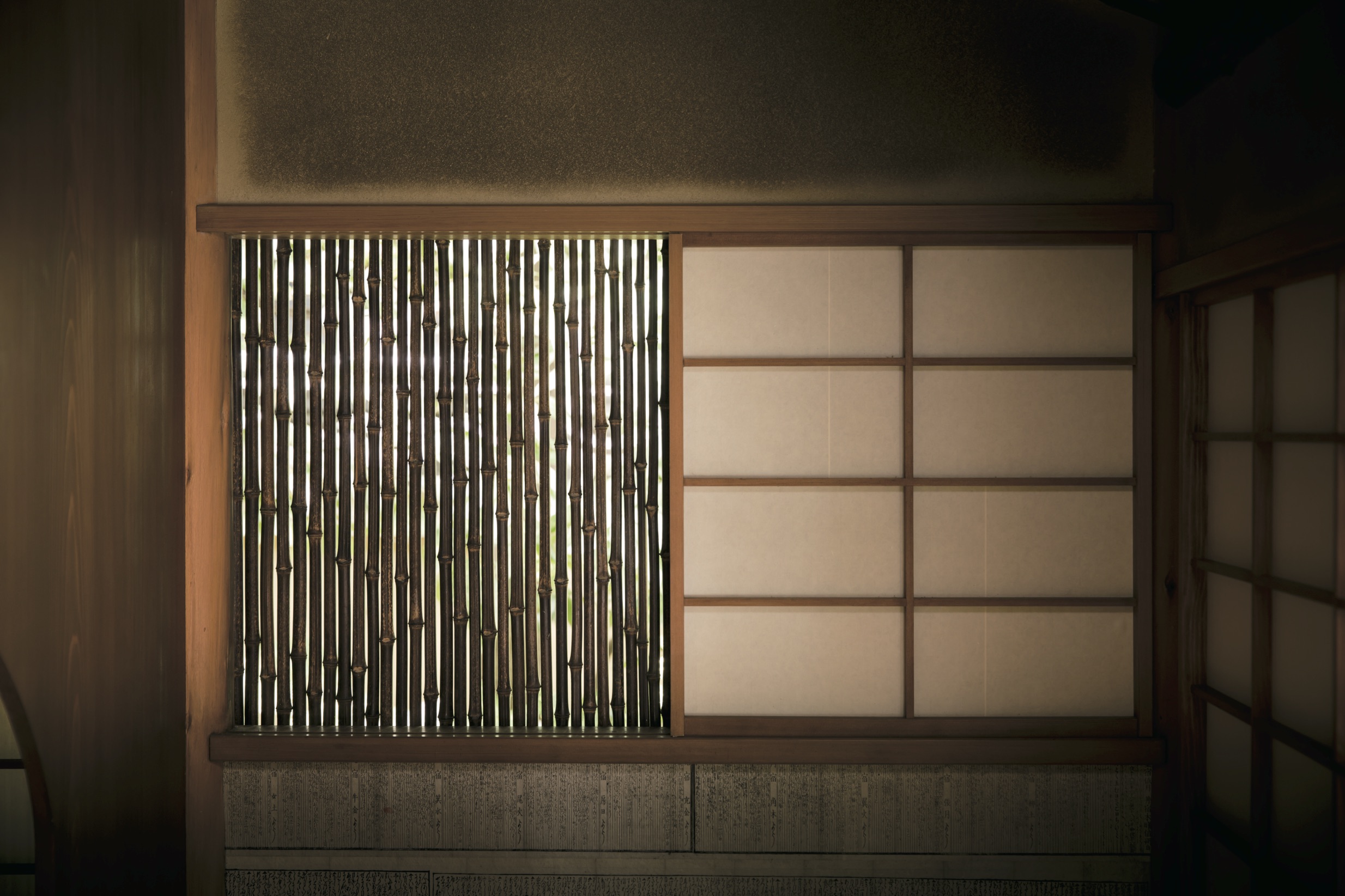 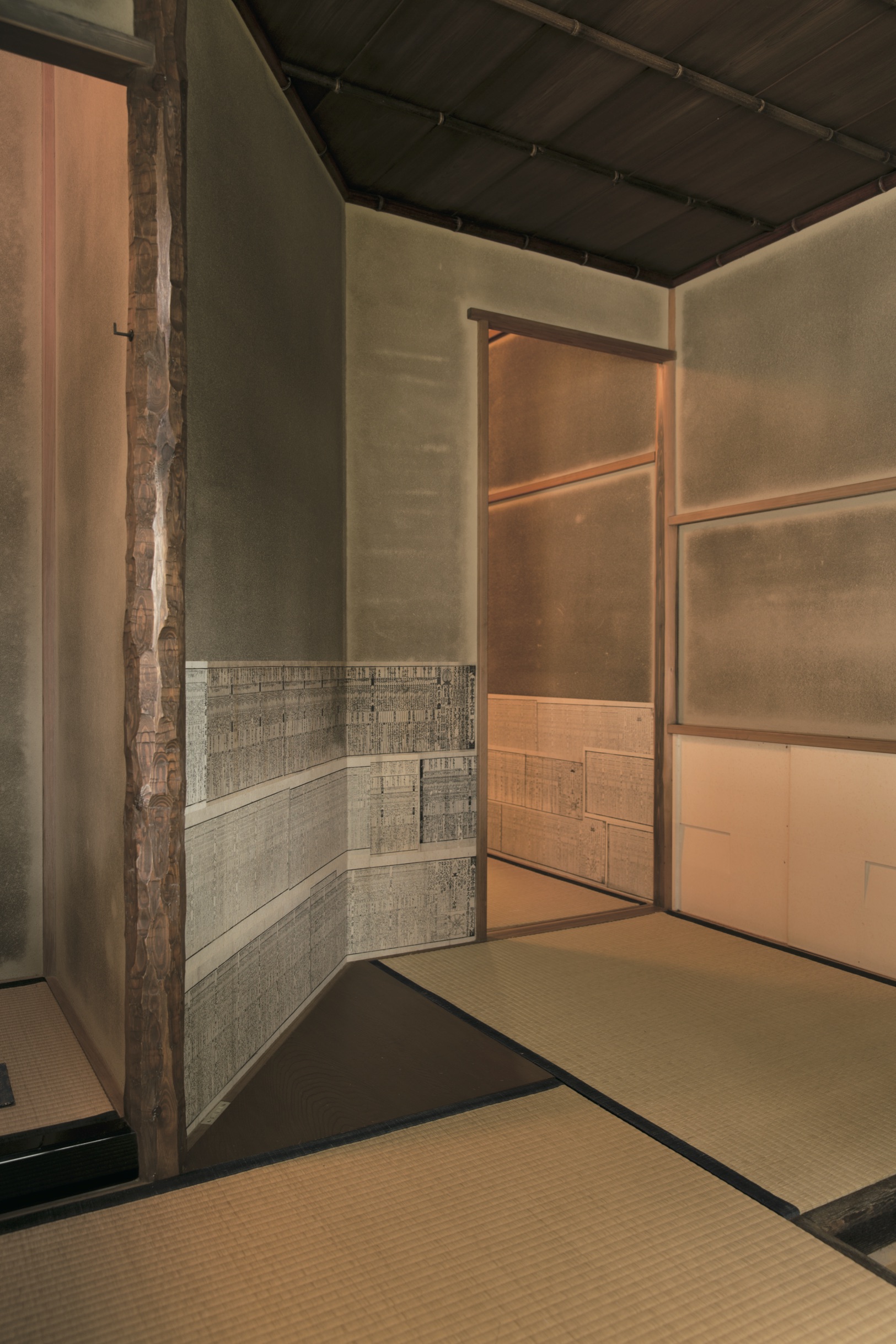 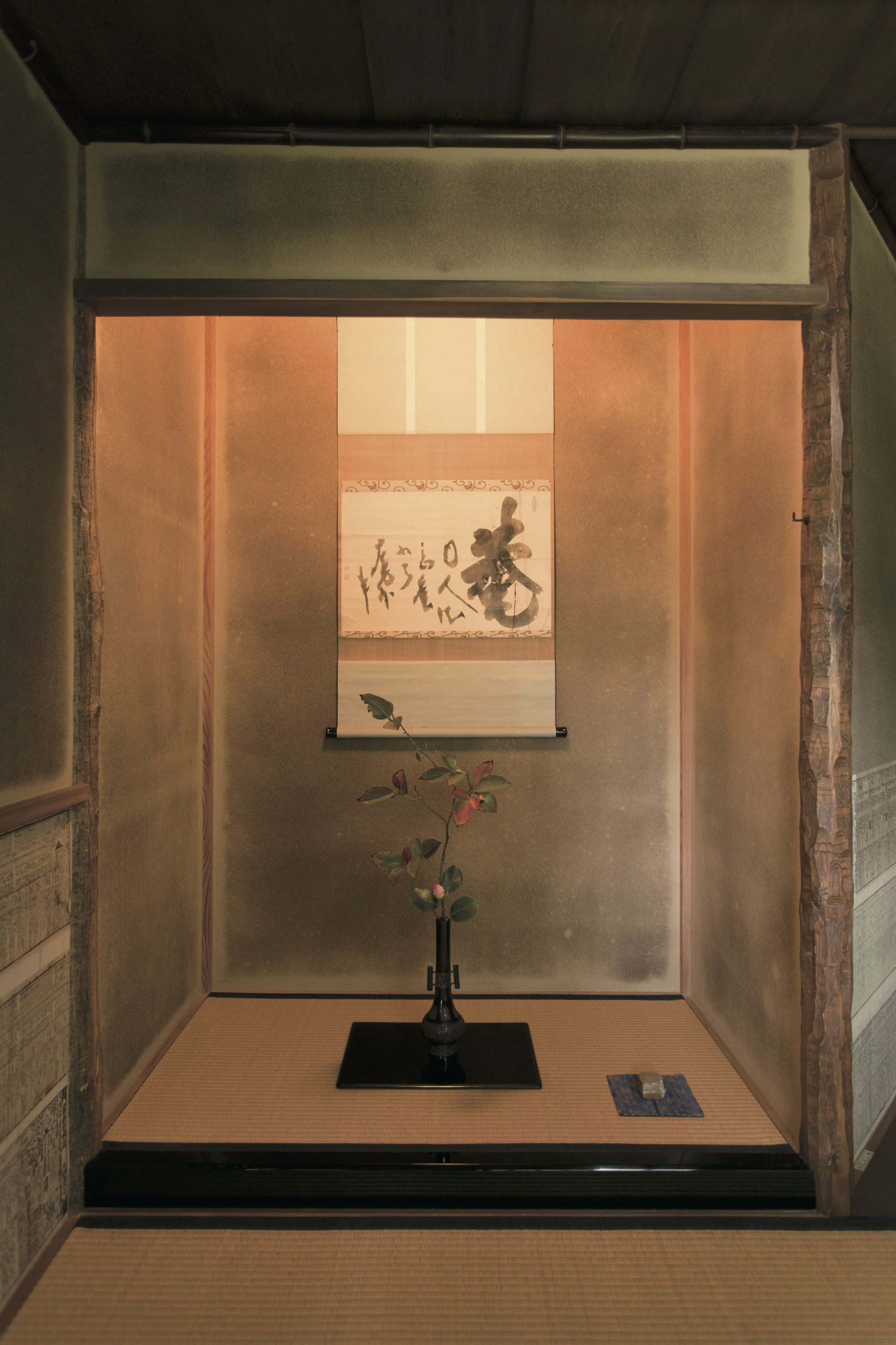 While making tea in the tea house, Keinin spoke of his wish to bring the original Jo-an relocated as described during the Buddhist temple abolition movement in the 19th century back to its original location at Shoden Eigen-in. “In Japanese we use the word yuisho. It refers to the roots of something or the status of something cultivated by history. Japanese people place particular importance on yuisho. So I think we have to bring Jo-an back to the place where its yuisho lies.” Likely to be the next head priest of the temple, Keinin says that bringing the original Jo-an is his mission. “Also, with other members of my generation I would like to re-establish the Urakuryu school of tea ceremony. The philosophy put into tea by Urakusai, in which he used reconciliation and culture to effect peace in an age of fierce wars is surely just what is needed in the world today.” Keinin is open about his personal hopes; to model his own life on that of Urakusai- a man from a samurai family who lived a secluded monk-like life and in the end left a far-reaching artistic legacy. 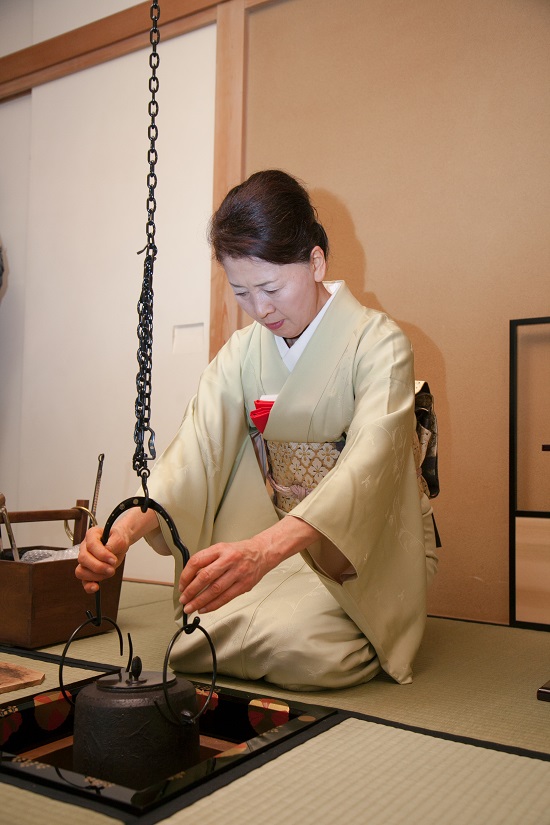 For the visitor to Kyoto who wants to experience chado, the mandatory stop is the Urasenke Center on Horikawa Dori in Teranouchi agaru in northwest Kyoto. From 9 A.M. to 5 P.M. visitors are welcome at the Chado Research Center gallery just off the foyer. After viewing the exhibit, if you proceed past the receptionist through the lobby, a kimono-clad graduate of the Urasenke tea school will serve you a traditional bowl of tea without charge.

For those with more time and a deeper interest, there is a more complete presentation of tea, with an explanatory lecture, conducted for a nominal charge by one of the American teachers at Urasenke. This demonstration, the most enlightening encounter with chado that a casual visitor is likely to experience, is held at 1:30 and 3 P.M. every Thursday except in August and January. Reservations can be made by calling the Urasenke Foundation (451-8516) before noon on Thursday.

The Japanese produce green tea from Camella sinensis plants, grown primarily in Uji, Shizuoka and Kyushu. The tea is available in powder or leaf form. The tea ceremony uses matcha, a tea powder that is whisked with hot water into a frothy, bright green brew.

Chanoyu, which attained greatness under Rikyu, has been handed down for over 400 years at Omotesenke’s Fushin’an. Fushin’an is the name of the tea room that was run by Rikyu and which has been inherited by the successive Iemotos since then. Fushin’an refers not only to the Senke residence but to the whole organization. It is also one of the Iemoto Sen Sosa’s names.

Now with a branch in New York, Ippodo has been selling tea in Kyoto for nearly 300 years. At their Kyoto shop, take a tea class, and then taste test a few varieties before snapping up some tins to take home.

For registered guest only

Listen here to a reading of The Book of Tea by Okakura Kakuzo: