Walking to a neighbor’s bath.
clogs clatter loudly–
winter moon.
Most people probably know that Japan is a country where shoes are removed at the door. While modern Japanese people usually step out with a typical assortment of contemporary footwear, in centuries past the shoes-on, shoes off problem was solved by zori and geta, traditional Japanese sandals for all occasions and seasons. Today these sandals are most popular at fireworks festivals and other traditional events. 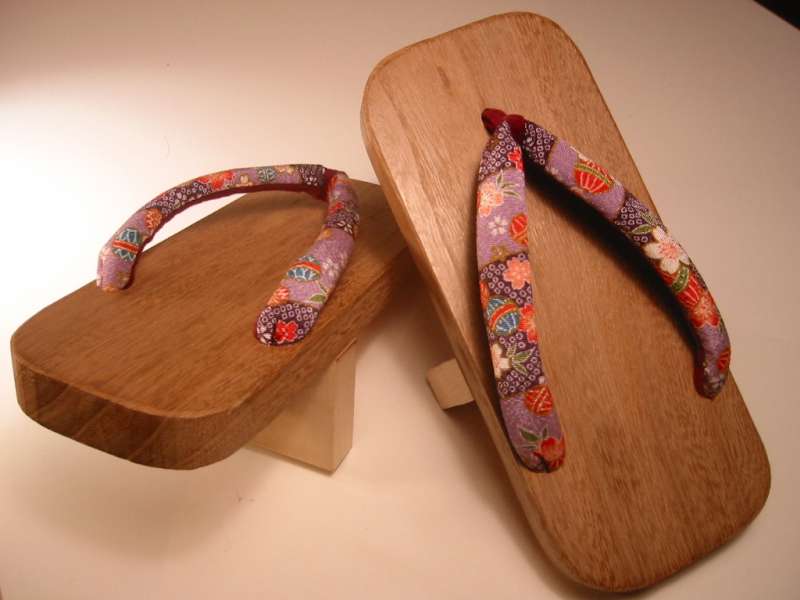 Traditional Japanese geta are wooden sandals that stand out mainly because of their “teeth”—the supporting pieces of wood attached to the sole of the sandal. While you might compare them to platform shoes of the ’70s, they weren’t originally designed for fashion. Rather, they give the wearer enough height to keep the lovely kimono from getting dragged in the mud or snow.

How to Wear Geta 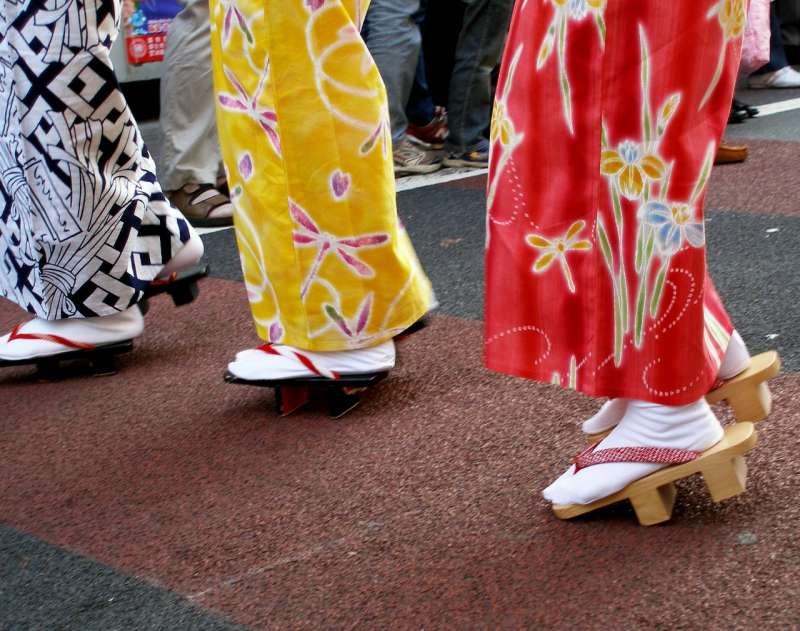 Merchants and sushi chefs traditionally wore extremely high geta to keep some distance between them and the scraps on the floor. Sometimes these men even wore geta that had just a single tooth, called tengu-geta, positioned right in the center of the sole.

There are also special geta worn by maiko (geisha in training that are solid with the toe slanted at the front. This type of geta is also sometimes worn by young girls during traditional celebrations. They are called pokkuri or koppori (say these words out loud a few times and you’ll realize they’re named after the sound the geta make as they clip-clop through the streets). 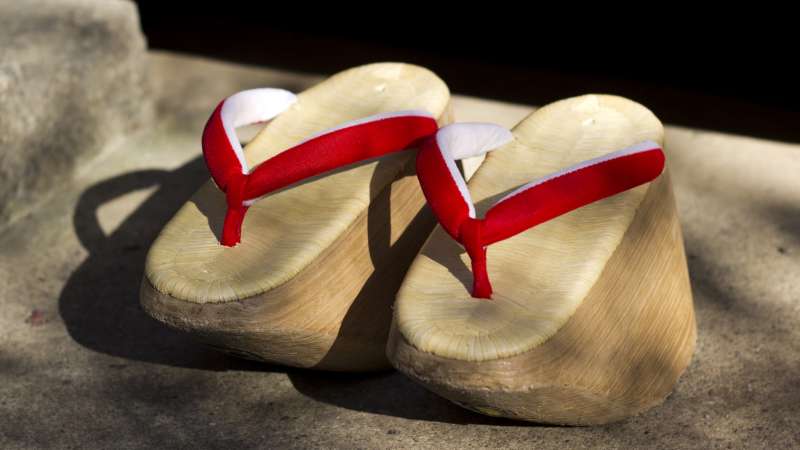 Although an old-fashioned shoe, geta are still a part of Japanese culture. Designers have from time to time reimagined them in more Western shapes; but for casual outdoor wear, the standard shape continues to be a practical and stylish option that can be worn almost any day. 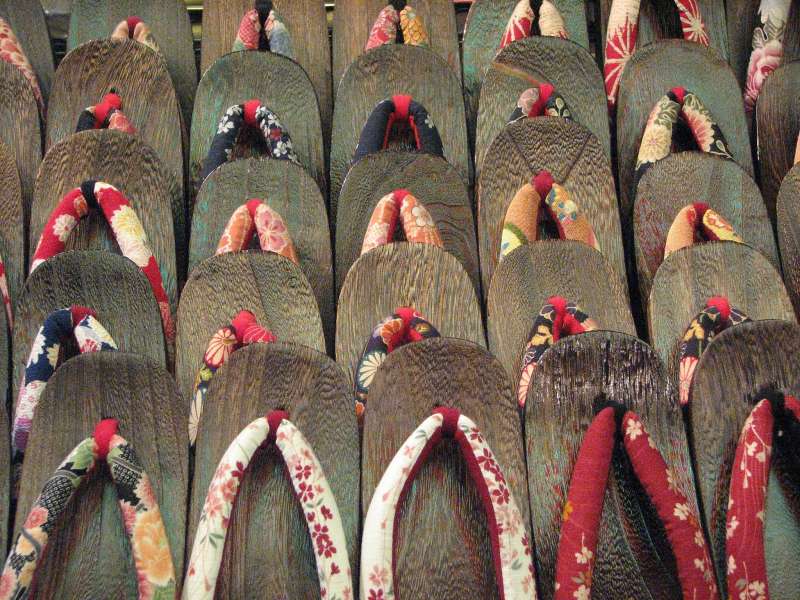 Except for the workwear type, women’s zori are always raised in the heel. The sole is also gently rounded in shape, so that to Western eyes they look more like regular shoes than geta. Men’s zori, while also slightly rounded, are always flat.

How to Wear Zori

The most beautifully decorated women’s zori are worn with kimono at very formal occasions, with the sandals becoming less elaborate as events become less formal, right down to straw zori for working. Men’s zori have fewer levels of formality than those for women. They are often made of straw or wood and can be worn barefoot.

For weddings, women’s zori are covered in ornate brocade fabric and accompany the most formal of kimono. For occasions that are less formal but still important, zori are covered in other types of fabrics. Another step down are vinyl zori, which can be really stylish but would not be worn to a formal event. Imitation straw zori (traditionally made of bulrushes) are also common but they are considered workwear and not worn with kimono.

Within these distinctions there is a lot of room to be creative. For special occasions they may be made of lacquered wood, or feature painted designs, or fur trim. Regular plastic zori are also attractive in different colors and can be customized with accessories.

Imitation straw zori worn by both men and women are always flat and never worn with a kimono. Although zori for men are most often this kind, there are also modern plastic versions that may be plain, lacquered or stained. 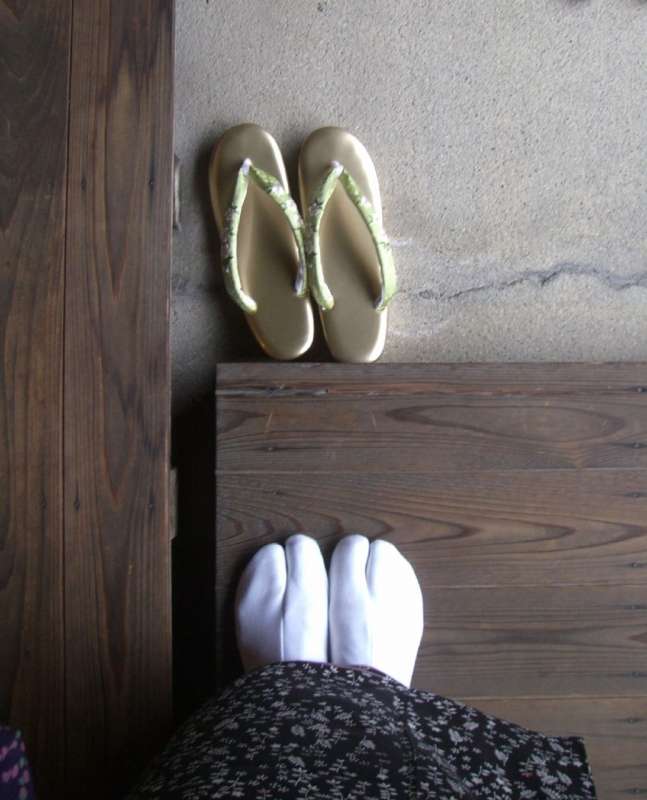 The final touch to traditional Japanese sandals are tabi, or toe socks. Except for the straw kind, women’s zori are always worn with tabi, but men only wear tabi on formal occasions. Tabi are not worn with geta when they accompany a casual cotton yukata. The general rule is that unless casual, all occasions require tabi.

Before assuming that tabi are just socks with a big toe slit, there are a few things to know. Rather than knitted, they are sewn from cloth cut to shape. The foot is slipped in through a row of fasteners at the back, and the tabi buttoned up the ankle. They have a rubber sole, so that when you remove your shoes you can walk around on the spotlessly clean floors inside.

Although for women they are predominantly white (and always white on formal occasions) patterned tabi are becoming popular for both men and women. Traditionally, men can wear blue or black tabi when traveling, but they wear white tabi on formal occasions.

Japanese people tend to have slightly smaller feet than Westerners, but this doesn’t exclude you from getting a pair of Japanese sandals or tabi. Especially since zori and geta are worn slightly small anyway, the foot should hang over the back a little. There is a good reason for this, especially with geta, because proper placement of the “teeth” under your feet is what prevents you from losing your balance.

Gion Naito has been a favorite of people who love kimono (traditional Japanese clothing) in Kyoto.

A favorite of people who love kimono (traditional Japanese clothing) in Kyoto.  They began in 1875 when Jubeimon started  timber and textile businesses and made geta sandals using leftover materials.

They offer made-to-order traditional Japanese footwear called zori.  The 5th generation owner, Seiji Naito says that not only do they carefully measure all parts of the foot, but they also ask which is your dominant foot and your weight.  The strap is made with fine cotton and Naito hits it with a wooden hammer to achieve the perfect softness to fit smoothly on the customer’s foot.  The complete footwear fit on your feet as comfortably as if you have worn it for many years.  Also, Naito can give you a lot of ideas and suggestions how to wear kimono and zori with his deep knowledge and appreciation of traditional clothing.

Located near the Higashiyama Ward Office