“Real things in the darkness seem no realer than dreams.”

“There are as many sorts of women as there are women.”

“Ceaseless as the interminable voices of the bell-cricket, all night till dawn my tears flow.”

Museum of Tale of Genji:

The Tale of Genji is a full-length novel consisting of 54 individual chapters that was written at the beginning of the 11th century in the middle of Japan’s Heian Period.

The tale, written by a woman known as Murasaki Shikibu, is a masterpiece that depicts the life of an imperial prince and had a significant influence on later literary works. It has been revered by many up to the present day.

The Tale of Genji is divided into three distinct parts. The first part includes 33 chapters that cover the birth of Hikaru Genji (Shining Genji) to when his power and achievements are at their height. The second part consists of eight chapters that cover the time up until Genji completes his life amidst decline and misery. The third part, consisting of thirteen chapters, depicts the life of his son, Kaoru, intertwined with stories of love and tragedy.

The last ten chapters, in particular, are primarily set in the Uji region and are actually referred to as the Ten Uji Chapters or Uji-Jujo. 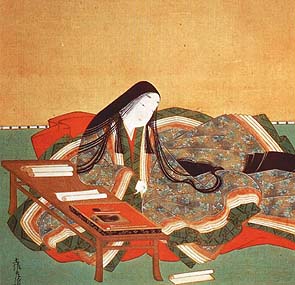 Murasaki Shikibu, illustration by Tosa Mitsuoki
who did a series on The Tale of Genji
(17th century)

Murasaki Shikibu was born around the first year of Tenen (973) as a daughter of Tametoki Fujiwara, a renowned Chinese poetry scholar and court official. Her great-grandfather was Tsutsumi Chunagon Kanesuke, a famous waka poet during the mid Heian Period. She lost her mother early in life and was brought up under the full influence of her father. After being married for three years, her husband died of an illness and she reportedly began writing The Tale of Genji as a way of overcoming her sense of grief and loss.

It was highly acclaimed and eventually led her to the imperial court to become a ‘nyobo‘ (lady-in-waiting) to Chugu Shoshi, the empress of Emperor Ichijo and a daughter of Michinaga Fujiwara, the most powerful and influential political noble of that time. A nyobo was a court lady (‘nyo‘) who was provided with a private room (‘bo‘) in her workplace. It seems that Murasaki Shikibu was a tutor and companion to Chugu Shoshi.

Murasaki Shikibu’s real name is unknown, but she was the author of Murasaki no Monogatari, otherwise known as The Tale of Genji, and her father, Tametoki, once worked as a ‘Shikibu no Jo’ (Secretary of the Ministry of Rites), which likely led to her being referred to as Murasaki Shikibu.