Everyone is asleep
There is nothing to come between
the moon and me.
–Seifu-jo

Minshuku
Minshuku are Japanese style “bed and breakfast” lodgings. They are usually family run, offer Japanese style rooms, and often include one or two meals in the price.

Japanese Apartments and Houses
An increasingly popular, but still relatively rare type of accommodation (currently mainly available in Tokyo and Kyoto) are entire apartments or houses offered to foreign tourists for short term stays to experience a true everyday lifestyle. On offer are apartments with traditional or modern interior, as well as restored historic houses.

Western Style Hotels
Western style hotels, including various international and Japanese hotel chains, can be found across Japan, especially in the larger cities.

Pensions
Pensions are comparable to Minshuku, except that they offer rooms in Western style rather than in Japanese style. They are typically found in mountainous resort towns and in the countryside.

Hostels and Dormitories
Hostels offer lodging and meals at the lowest budget level. Japan Youth Hostels, a member of the International Youth Hostel Federation, operates more than 300 hostels across Japan.

Capsule Hotels
Mainly targeting a male clientele in need of nothing but a bed, capsule hotels accommodate their guests in small capsules. A television, a shared bathroom and coin lockers are usually provided.

Temple Lodgings
It is possible for tourists to spend the night at some Buddhist temple lodgings (shukubo). A stay often includes two vegetarian meals and the opportunity to join the morning prayers. One of the best places to experience a night at a temple is Mount Koya.

Manga Cafes
Mango cafes are establishments that provide their customers with seats or booth to read manga(Japanese comics) and surf the internet. Many of them are open 24 hours and provide various amenities that make them an option for low-budget overnight stays.

Love Hotels
Not meant as tourist lodgings, love hotels are visited by couples who wish to enjoy some undisturbed time together. Rooms at love hotels can be rented for 2-3 hours during the day or for an overnight stay.

Weekly and Monthly Apartments
Apartments and shared apartments, rented on a weekly or monthly basis (sometimes even on a daily basis), are among the most inexpensive ways of staying in Japan for an extended period. Several companies have emerged which specifically target a foreigners in Japan.

If you’re coming to Japan for a short trip, see our page on hotels, hostels and Japanese style accommodation.

Long-term visitors to Japan or those planning to stay and work here have two main choices: gaijin houses (guest houses) or renting an apartment or house. Gaijin houses are plentiful and have multiplied in number many times over the last 20 years or so. They are relatively cheap and have weekly or monthly rates, while finding an apartment can be a frustrating and expensive experience. Most people start off spending a few months in a gaijin house and move into an apartment when they’ve put some money together. Free magazines available in bars, pubs and restaurants usually have listings of gaijin houses and their rates.

There are several hundred of these houses in the major cities and they are a popular choice for finding one’s feet and checking the lay of the land, so to speak. They’re a good place to meet other foreigners and find out the latest information – though, of course, not as good as this site! They usually have weekly and monthly rates (sometimes daily, too) based on private or shared furnished rooms. Rates vary but in Tokyo the average is about ¥30,000 per month for a shared room or ¥60,000 for a private room. Kitchen, lounge and bathroom facilities are shared. The main appeal is that they require a small or no deposit rather than the huge amount that is usually charged when renting.

Anybody staying longer than a few months will probably think about getting their own place. The main barriers are cost and discrimination – although you will also need to have a guarantor. In the Tokyo area, they have a system called reikin, a non-refundable deposit usually called ‘key money’ in English. The standard rate is two month’s rent, which added to the usual two month’s rent shikikin (refundable deposit), one month’s rent real-estate agency fee and a month’s rent in advance comes to quite a hefty sum of money.

In other areas, the reikin system is not usually used but refundable deposits are higher. And the term ‘refundable’ is open to interpretation, too. Usually, a third or so is kept by the landlord for redecoration or replacing tatami mats or whatever. Discrimination tends to be pretty blatant. If a real-estate agent is calling around for you, often the first thing they say will be “I’ve got this foreigner who’s interested in your place…” – many times, they won’t get any further than that.  There are also restrictions on pets, children, students.

Rents vary greatly depending on location, distance from the nearest train station, size, age of the building and the floor the apartment is on. In Tokyo, you can find a tiny, old one-room place with a gas stove and no bathroom for ¥30,000 a month or pay a million yen a month or more for a big Western-style apartment in the center of town. 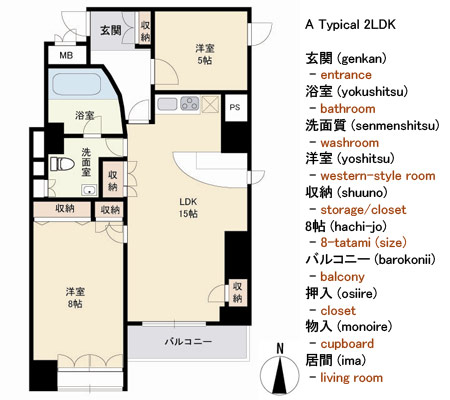 One thing you’ll need to get used to is the simple system for describing madori or room layout. A typical family apartment might be described as 3LDK. The 3 refers to three bedrooms, the L to the living room, the D to the dining room/area and the K to the kitchen. Often the LDK is actually one large space with an open plan kitchen separated by a counter. There may be an S thrown in there too, which refers to a study. Most apartments will have at least one room with tatami flooring, as this seems to be regarded as the way to retain that essential “Japanese-ness.” If an apartment is described as “one room” or 1R, it has no separate kitchen and probably a “unit bath,” with a toilet, sink and bath/shower crammed into a small space.

A possible source of confusion is the Japanese words for the two types of apartments – apaato and mansion. Apaato means a wooden apartment building, often old and with little or no sound or heat insulation. They tend to be on the cheaper end of the scale although often they are quite nice and comfortable. The word mansion is especially misleading. It conjors up images of a palatial home with a servant’s wing and dozens of guest bedrooms. Actually, it just means an apartment in a steel structure or concrete building. The buildings can be small with 10 or so apartments or 30 stories high with high-speed Internet access and an indoor swimming pool. They usually have a western-style design and tend to be more expensive and have more modern conveniences than apaato. Mansion can also be split into two types – chintai for rental units and bunjo, which are built to be sold to individual owners.