Heralded as one of Kyoto’s three mysterious festivals, the Yasurai Festival at Imamiya Shrine is held each year in the middle of April in order to pray for good health and the prevention of illness.

At noon the festival starts out at a small nearby temple called Kōnen-ji and the procession makes its way around the neighborhoods, performing intermittently before arriving at Imamiya Shrine at approximately 3pm.

Imamiya Shrine enshrines a deity of health and long life, but it is said that during the cherry blossom season he leaves the shrine to play tricks and becomes a god of sickness. In order to soothe his spirit this lively festival features bright umbrellas decorated with living flowers in order to lure the god back to the shrine and have him protect the worshippers’ health for another year. 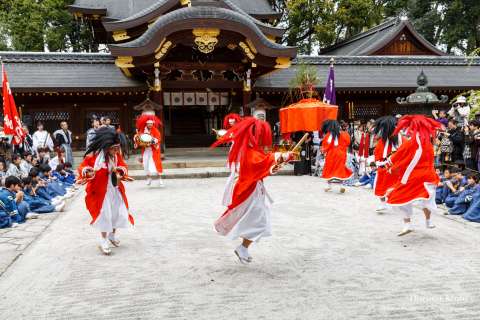 Performers dressed as oni lead processions around the shrine grounds and perform drumming dances in front of the main hall, the sub-shrine, and the prayer hall to delight the deities. Young boys dressed as sacred pages carry small drums, and the accompanying group plays flute, reads out a chant, and carries ritual weaponry. Red umbrellas, said to attract the gods’ eyes, are thought to bring good health for a year to those who pass under them, so it’s not uncommon to see people lining up for the chance to pass under one of these lucky umbrellas.