I hope you can arrange to be at the Todai-ji Temple, Nigatsu-do Hall, in March for the Shuni-e.

Shuni-e, meaning ceremony of the second month, is a series of Buddhist rituals in which priests pray to repent for the sins of the profane world to the goddess Kannon, who is enshrined in Nigatsu-do Hall, a sub complex of Todai-ji Temple in Nara. These rituals, annually held between March 1-14, go back more than 1,000 years.

Shuni-e consists of the ceremony of fire, otaimatsu, and the ceremony of water, omizutori. At otaimatsu, priests carry giant torches to and then across Nigatsu-do’s balcony after sunset every night. The sparks are said to bring good luck, so be sure to catch one. At omizutori, priests descend from the Nigatsu-do during the night from March 12-13 to draw water from a well in front of the temple hall, which only flows at this particular time of the year. The water is then given to the people and offered to Buddhist deities. This ritual is thought to have restorative powers and it has become so popular that the entire Shuni-e ceremony is more commonly referred to as simply omizutori. 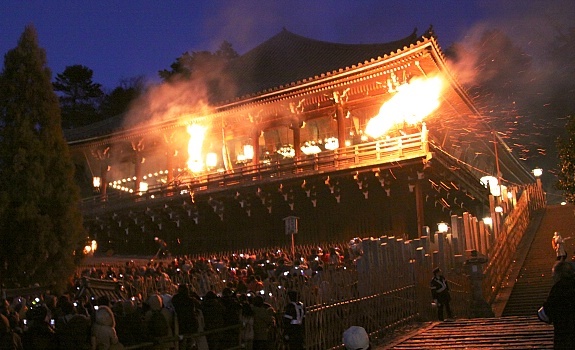 Omizutori is the commonly used name for Shuni-e, a series of events held annually from March 1 to 14 at Todai-ji Temple. This collection of Buddhist repentance rituals has been held every year for over 1250 years, making it one of the oldest reoccurring Buddhist events in Japan.

Among the many different events held during Omizutori, Otaimatsu is the most famous and spectacular. Just after sunset on every night from March 1 through 14, giant torches, ranging in length from six to eight meters, are carried up to Nigatsu-do’s balcony and held over the crowd. The burning embers, that shower down from the balcony, are thought to bestow the onlookers with a safe year.

The size of the torches and the duration of Otaimatsu vary from day to day. On most days, ten medium sized torches are brought up to and carried across the balcony one after the other, and the entire event lasts about twenty minutes, while the audience stands in the courtyard below the wooden temple hall.

On the 12th and 14th, however, the procedure is slightly different, as shown in the table above. On the 14th, the last day of Omizutori, the event lasts only about five minutes, but all ten torches are brought up to the balcony at the same time, making for a particularly spectacular sight.

On the 12th, the torches are larger and more numerous, and the ceremony lasts longer. It is also the most crowded day, so that most spectators cannot settle down in front of the Nigatsu-do, but are kept continuously moving past the hall in a queue, limiting actual viewing time to around five to ten minutes.

On all days of the event the courtyard below Nigatsu-do becomes crowded before sunset, and it is advised to arrive early in order to get good views of the balcony. Crowd size varies from day to day, with heavier crowds expected on weekends and lighter crowds when the weather is poor. On the 12th it becomes most crowded, but it may not be necessary to arrive early, as the spectators are rotated through the courtyard, offering everyone a brief view of the action.

In the night from March 12 to March 13 between around 1:30am and 2:30am, priests descend repeatedly from the Nigatsu-do by torchlight to draw water from a well at the base of the temple hall. The well’s water is said to flow only once a year, and to have restorative powers. It is this event that is actually named Omizutori (“water drawing”). Yet the entire two-week event has become popularly known under its name.

Following the water drawing event, the mysterious Dattan ceremony is performed inside the Nigatsu-do hall. During the ceremony, horns are blown, bells are rung and priests swing around burning torches inside the wooden building. The event comes to an end around 3:30 a.m.

Nara has some of Japan’s most impressive festivals and events. Many are evening fire festivals, making them some of the most photogenic and dramatic events of the Japanese calendar. There are plenty of other events, special openings, museum exhibitions and other happenings going on throughout the year; ask at the various tourist offices to find out what’s on while you are in town.

Held on the fourth Saturday of January (24 January in 2015), or the following day in the event of bad weather, this is Nara’s most spectacular festival. At around 5.30pm, a fire is lit in the middle of Wakakusa-yama, the mountain that rises over the east side of Nara. At 6pm, a fireworks show is held and then, at around 6.15pm, the dry grass on the hillside is set alight and the entire mountainside burns brightly. You’ll have to arrive very early to grab a spot at the base of the hill, but you can see it from many parts of Nara-koen Park and even Downtown Nara.

Held twice annually, on the evenings of 3 February and 14-15 August, between 6.30pm and 9pm, this festival is a feast for the eyes. About 3,000 lanterns are placed around Kasuga-Taisha Shrine and along the pathways leading to the shrine.

Yet another dramatic fire festival, this event is held on the evenings of 1-14 March, starting at times ranging from 6.30pm to 7.30pm, at Todai-ji Temple’s Nigatsu-do Hall (this is the hall that overlooks the plaza that is located east of the Daibutsu-den Hall). In this festival, the monks of the temple carry large flaming torches around the veranda of the hall and then wave them over the edge, raining embers down on the crowd below (it’s not quite as dangerous as it sounds). The most spectacular performance is held on the last evening, 14 March, starting at 6.30pm. By the way, the water-drawing ceremony, from which the event takes its name, is held later on in the evenings.

Held at Kofuku-ji Temple on the third Friday and Saturday of May, this is a mystical performance of Japan’s ancient musical drama known as Noh. Illuminated by firelight, the effect is truly otherworldly. One-day tickets cost Y3500 and two-day tickets cost Y5000 and can be purchased at the tourist information centers in town. Performances start at around dusk.

This event is held at the Roku-en deer enclosure, close to Kasuga-Taisha Shrine, on Sundays and holidays in the month of October. Here, those rascally deer from all over Nara-koen Park are rounded up and brought to the enclosure to have their antlers ritually sawn off.