plum blossoms––
the sound of a three-penny
flute
–Issa


Bunraku (pronounced boon-rakoo) is a form of traditional Japanese puppet theatre characterized by almost life-sized puppets accompanied by narrative chanting and shamisen music (a shamisen is a traditional Japanese string instrument). While puppet theatre is often seen as entertainment for children, the Japanese people consider Bunraku a serious form of art. Bunraku plays are based on tales or legends of past centuries, with themes devoted to conflict between social obligations and human emotions.

Bunraku is the name commonly used for ningyo joruri – “ningyo” meaning puppet and “joruri” being a form of chanted narration. The name Bunraku is derived from a puppet troupe founded by Uemura Bunrakuken early in the 19th century. The earliest form of Bunraku was introduced by Japanese storyteller Takemoto Gidaya in 1684 when he set up his own theatre in Osaka, Japan. Takemoto Gidaya was assisted in this effort by Chikamatsu Monzaemon, considered the greatest playwright in Japanese history, and Takeda Izumo, a famous theater owner and manager. Gidayu and Chikamatsu provided the art for Bunraku, while Takeda Izumo funded the theater and provided technical expertise.

Japanese puppet theatre was most fashionable in the 18th century, and the writings of Chikamatsu Monzaemon played a large part in making it popular. Chikamatsu’s Love Suicides at Sonezaki is comparable in importance to Shakespeare’s Romeo and Juliet. After Chikamatsu’s death, Bunraku’s popularity declined due to a lack of adequate playwrights, but interest was revived in the 19th century by puppeteer Uemura Bunrakuken.

In 1963, two Japanese theater troupes joined and formed the Bunraku Association, an organization that today sponsors regular performances held at the National Theater in Tokyo and the National Bunraku Theater in Osaka. A Bunraku performance typically takes around three to four hours. 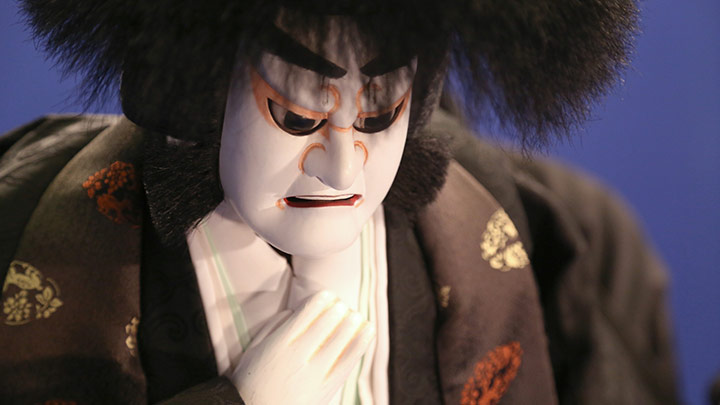 Three puppeteers work as a team to perform these serious and adult dramas. Renowned puppeteer Kiritake Kanjuro explores this extraordinary art through “Kagamiyama Kokyo no Nishiki-e“, a tale of revenge, and “Sugawara Denju Tenarai Kagami”, a historic tragedy. Kiritake’s team of 3 puppeteers perform with the leading doll in the studio, showcasing the full depth and breadth of emotion of which bunraku is capable. 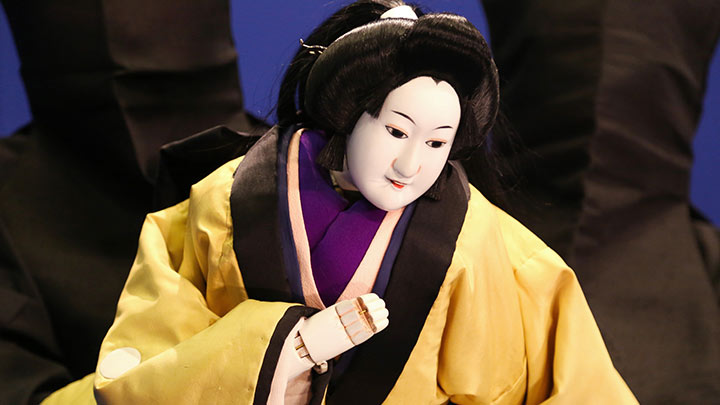 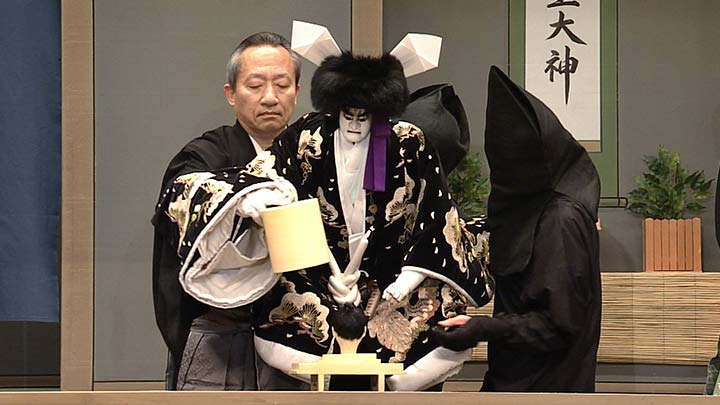 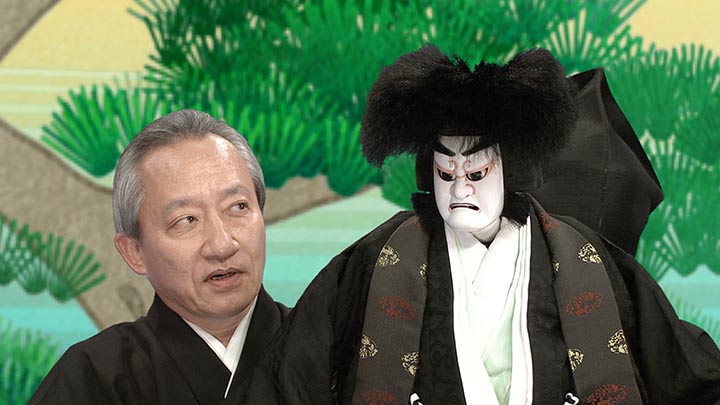 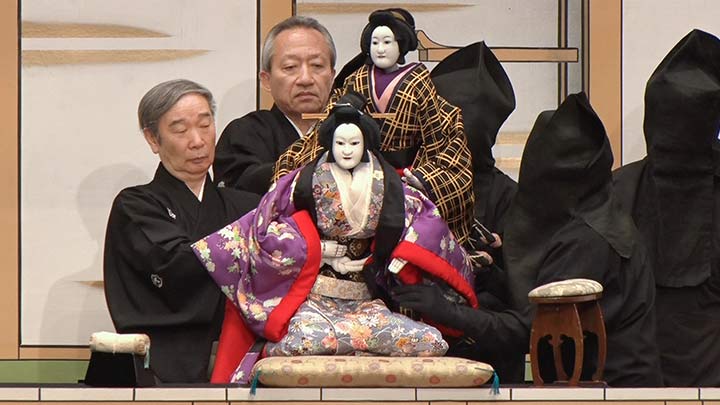 The Performers
Bunraku puppeteers, narrators, and musicians are traditionally of the male gender. Props are usually minimized so that the audience may focus primarily on the puppets. The main puppeteer is generally the star of the show and who most of the audience comes to see. Popular Japanese puppeteers such as Yoshida Tamao, Yoshida Minosuke, and Yoshida Bunjaku help fill the theaters with patrons.

It takes three puppeteers to control each of the Bunraku puppets that are the main characters in the play. Unlike most puppet theaters where an extensive effort is made to hide the manipulation of puppets (such as with strings), the puppeteers in Bunraku perform in full view of the audience. The main puppeteer, called an omozukai, is visible to the audience and sometimes colorfully dressed while the other two operators are cloaked in black robes and hoods. The omozukai uses his right hand to control the right hand of the puppet. The left puppeteer moves the left hand of the puppet with his own right hand by means of a control rod that extends back from the elbow of the puppet. A third puppeteer operates the feet and legs. If all three puppeteers do not work together in syncronization, the puppet’s movements will seem unnatural and the puppet will not appear to come to life.

The Puppets
Bunraku puppets range in size from two to four feet tall or more, depending on the age and gender of the character and the tradition of the specific puppet troupe. The heads and hands of traditional puppets are carved by specialists and the bodies are constructed by puppeteers. The elaborate costumes and intricate carving of the puppets make them some of the most prominent and unusual puppets in the world.

The heads of the puppets can be very sophisticated mechanically. In plays with supernatural themes, a puppet may be constructed so that its face can quickly transform into that of a demon. Less complex heads may have eyes, noses, mouths, and eyebrows that move. The controls for all movements of the puppets head and face are located on a handle that extends down from the neck of the puppet, and are reached by the main puppeteer inserting his left hand into the chest of the puppet through a hole in the back of the torso

During the play, tayu and shamisen players don’t see the stage. The back and forth between these two elements of the “sangyo” as they heighten their emotions and those of the characters in the play, creates a certain tension, and this harmonious tension contributes much to a successful performance. Some dramas feature historic incidents and others feature lives of ordinary people. But in both types, essential emotions of human beings, which are the same now as in ancient times, are portrayed. Indeed, the world portrayed by dolls seems more profoundly human than the human world we are normally accustomed to.

Bunraku is usually performed at the National Bunraku Theatre in Osaka, the birthplace of Bunraku, and the Small Theatre of the National Theatre in Tokyo. Theatrical tours to other places in Japan are held in March and October. Basically, Program 1 starts at 11 a.m., and Program 2 at 4 p.m. Each show is about 3-4 hours with a short intermission.
Reservation – Ticket Center: tel, 0570-07-9900 (10 a.m.- 5 p.m.)
An English website of Japan Arts Council – http://www.ntj.jac.go.jp/english/

TOKYO
National Theatre
Tel: 03-3265-7411 Subway Hanzomon Sta., Nagatacho Sta.
4-1, Hayabusa-cho, Chiyoda-ku, Tokyo 102-8656
At the National Theatre in Tokyo, shows can be seen in Feb, May, Sep and Dec. In Dec, a program for learning about Bunraku is held.
Useful Services
1. Earphone guide in English and Japanese. A brief flyer in English is added.
Charge: 650 yen per one set plus 1,000 yen guarantee fee, which is to be back upon
return of the earphones.
2. A program with English explanation (charged)

OSAKA
National Bunraku Theatre
Tel : 06-6212-2531 Subway or Kintetsu Nipponbashi Sta.
1-12-10, Nippon-bashi, Chuo-ku, Osaka 542-0073
At the National Bunraku Theatre in Osaka, shows can be seen in Jan, Apr, the end of Jul-beginning of Aug, and Nov every year. In June, the theater holds a learning program for beginners (first-time audience) and students.
National Bunraku Theatre in Osaka offers “makumi-seki,” a lower-cost ticket for those who wish to see only one act (30-120 minutes, depending on plays). The price of makumi-seki admission depends on plays. Please contact tel, 0570-07-9900 on the day of the play.
Useful Services
1. Earphone guide in English and Japanese. Charge: 650 yen per one set plus 1,000 yen guarantee fee, which is to be back upon return of the earphones.
2. An English leaflet summarizing programs (free of charge)
3. A leaflet briefly explaining Bunraku for beginners in English, Korean and Chinese (free of charge)
4. A display introducing Bunraku at an exhibit room (free of charge). Explanation in English is available (reservations needed: theater tel, 06-6212-2531)