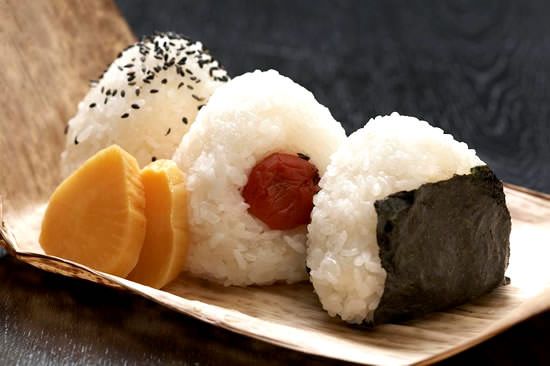 Bento History Started from Heian Period (794-1185)
The origin of bento goes back to the Heian period. At that time, dried boiled rice was used as a potable food. Dried boiled rice could be kept in a small container, and could be eaten as is or after cooked in water. After the Azuchi-Momoyama period, a lacquer lunch box that can still be found today was introduced. After that, bentos came to be used for occasions like cherry blossom viewing or a tea ceremony. 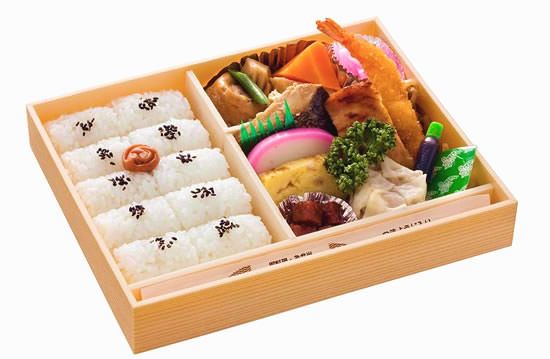 During the Edo period when nationwide peace was maintained, bento became a wide ranging and a graceful culture. Travelers and tourists prepared a simple ‘packed lunch’ to carry around. Packed lunch was a set of rice balls wrapped in bamboo sheath or placed in a bamboo basket. Makunouchi-bento’ is still popular and also emerged in the Edo period. There is a theory that the name Makunouchi-bento comes from the fact that people who saw Noh and Kabuki enjoyed this special bento during intervals (between acts), that is, Makuai, and this theory is widely accepted. It is said that many how-to books on bento were published during that time. These books covered the detailed and specific instructions on how to cook, wrap, and decorate bentos intended for people who prepared for the Doll Festival or cherry blossom viewing. 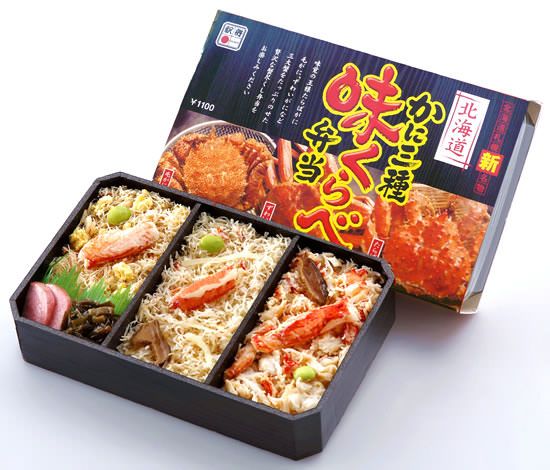 Ekiben (Box Lunch of the Train) appeared in Meiji Period
Unlike Today, during the Meiji period when school lunches were not available and the food service business had not been well developed, government officials working at administrative institutions still went to work carrying a packed lunch like ones used during the Edo period. Therefore, a low-paid lower ranked government official was called ‘packed lunch.’ Because schools in the Meiji period did not provide school lunches, students and teachers had to bring their own bentos. At this time, the first Ekiben (box lunch sold on trains or at stations) were put on sale. There are several theories regarding where Ekiben was started. Therefore it is not certain when, but it has been estimated that Ekiben were started from the late 1870’s to the early 1880’s. Initial Ekiben was quite simple as it included only rice balls and takuan (pickled radish) wrapped in a bamboo sheath. 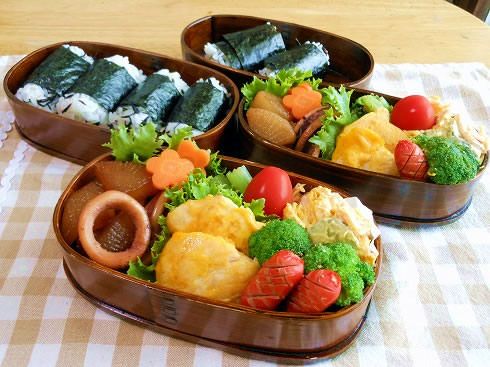 Bento Played Important Roll in School Lunch
In the Showa period, an anodized aluminum lunchbox was developed. When many elementary schools used a stove as a heating appliance, anodized aluminum lunch boxes brought to school were directly placed onto the stove in order to keep it warm or heat it up. After World War II, lunch at school was replaced by school lunches that came to be available for all students and teachers in schools. This gradually reduced the custom of bringing bento to school. Today, however, school lunch system was abolished in some areas due to the public administration’s effort to reduce the cost. Then, the custom of bringing bento from home is said to have been revived. 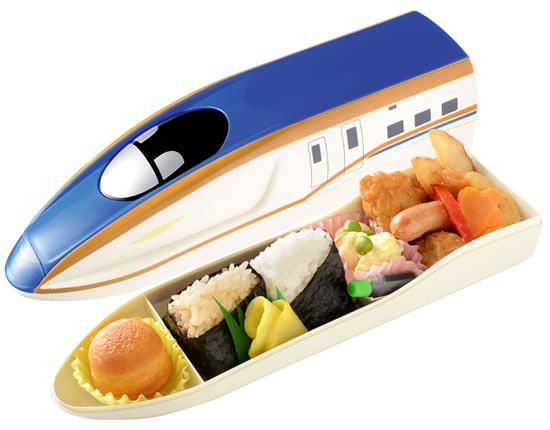 Ekiben Became Diversified and More Attractive
In the 1970’s, with the help of the Discover Japan campaign launched by the Japan National Railways (JNR), the number of tourists who used the railway increased. With this increase, Ekiben became diversified by using local products, local dishes, or something related to a particular tourist spot. Vendors that delivered bentos to small businesses which did not have their own cafeteria became popular. During that time, a jar type thermos lunch box was developed. The spread of this type of lunchbox allowed one who brought bentos to their workplaces or schools to enjoy a warm bento. However, this type of lunch box was disadvantageous in that it was too large to put in a bag. Therefore, one had to carry a lunch box over one’s shoulder besides a bag in order to have a warm bento at lunchtime.

Take Out Bento and Convenience Store Bento Swept the Country 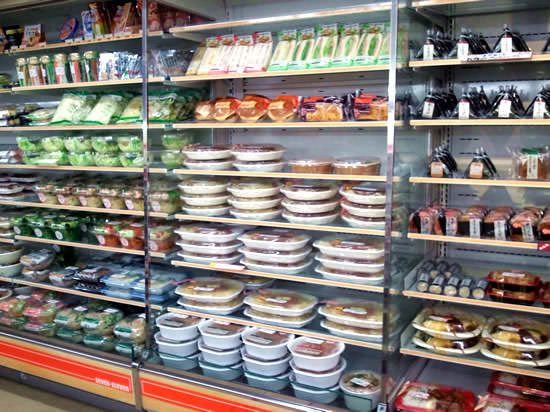 From the late 1970’s to the 1980’s, Bento reappeared in new markets. One was the rise of takeout bento (so-called Hokaben). It is notable that Hokka-Hokka Tei founded in 1976 dramatically increased its sales using the franchise system. The other were the sales at convenience stores that had spread rapidly. You could warm a bento in a microwave oven there to eat. Meanwhile, bentos also became available on sozai corner (corner selling daily dish) at supermarkets. These created a new trend of ‘taking a bento home to eat.’ Then a number of vendors who came to sell lunches to the inner city, with few dining halls, increased rapidly. Bento businesses boasting warm bento delivered at specified times also became available. In response to such a move, heat-resistant plastic lunch box gradually replaced metal lunch box typified by a packed meal in an oversized lunch box. 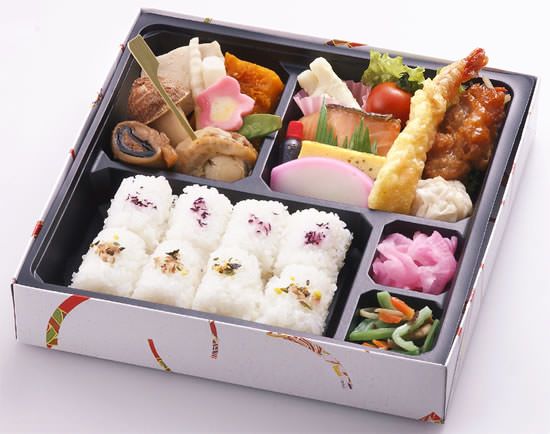 Shokadi-Bento originated from Kaiseki Cuisine
Shokado-bento have a similar style with a combination of white rice and accompanying dishes. However, a Shokado-bento is a newer style bento which was developed in the early Showa period. Their origins are very much different: while the Makunouchi-bento was developed from Honzen ryori (full-course haute cuisine), the Shokado-bento arose out of Kaiseki ryori (tea-ceremony dishes). 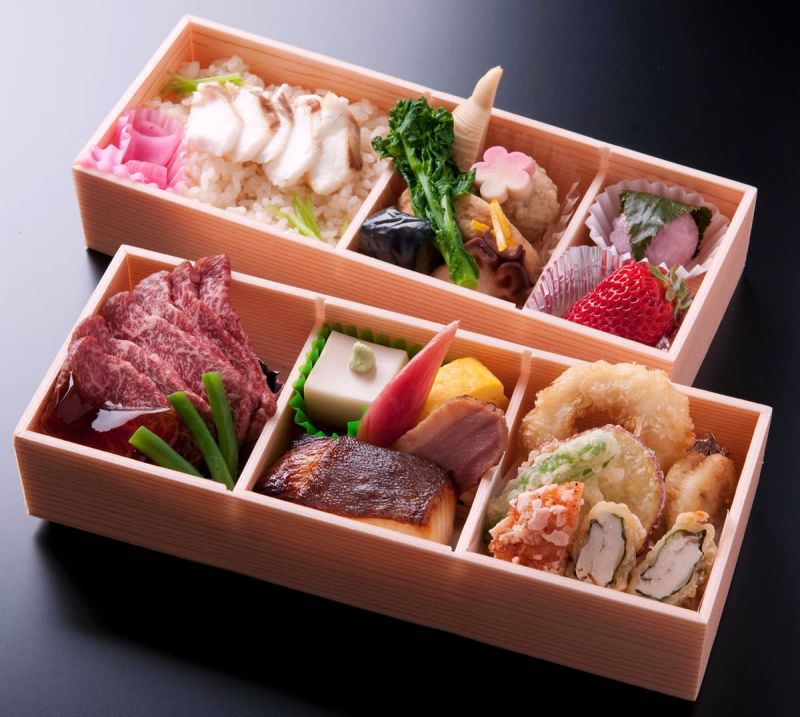 Bento is traditionally a kind of portable food and is the equivalent of one meal. It can be classified broadly into two kinds: Homemade and ready-made bento for sale. You may want to treat yourself to the finest of bento meals at Rokusei.

Part of the Wakuden group, for bento and soba meals, try this establishment near the Daitoku-ji Temple Complex.

Well-established ryotei restaurants in Kyoto may have the image of being expensive and hard to get into. The following bento boxes will allow you to enjoy the tastes of Kyoto ryotei restaurants for reasonable prices, since meals there usually cost anywhere between several thousand yen and 20,000 yen. They are popular among the Japanese as a casual way to experience ryotei food.

Niden, which is located near Nijo Castle, has a longstanding history dating back to 1757. It was a shidashiya (a shop that cooks and delivers dishes and bento boxes based on orders) for years, and has become famous around the country since establishing a restaurant in 1966. At JR Kyoto Isetan, it sells limited-availability seasonal bento boxes such as the Niden Kobako. Niden Kobako is a two-tiered bento box with simmered food and chirashizushi (a type of sushi with a variety of ingredients on top of vinegar rice). The contents change monthly.

Izuu is also a long-established shop dating back to 1781. Its specialty, Saba Sugatazushi, which is famous around the country, is a labor-intensive item in which halves of fatty mackerel caught in the waters near Japan are marinated in salt and rice vinegar and kept in a refrigerator with ice overnight to lock in the flavor. The mackerel is then placed on top of vinegar rice that is formed into a log, and then wrapped in kombu seaweed. The kombu umami flavors are transferred to the mackerel and vinegar rice, giving it a rich yet delicate flavor. The flavors change with time, so you can enjoy the transformation. 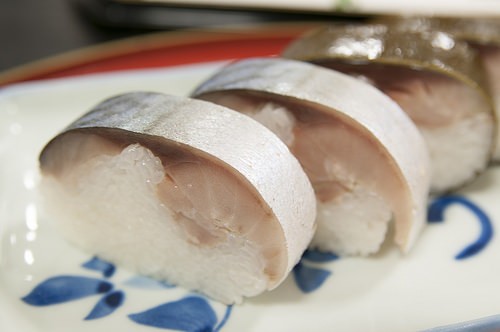 Murasakino Wakuden was initially established as a ryokan inn in about 1870. It was eventually reborn as a ryotei restaurant and is now famous throughout the country as a long-established ryotei restaurant.
At JR Kyoto Isetan, the restaurant sells bento boxes such as Murasakino, which is filled with ingredients from the land and sea, and Tai Chirashi, which centers on thinly sliced red sea bream. These bento boxes can be enjoyed both for their delicate appearance and refined flavors.

Shimogamosaryo, established in 1856, is a long-standing ryotei restaurant near the World Heritage Site, Shimogamo Shrine, known for the Aoi Matsuri festival. A variety of bento boxes that enable you to casually taste the flavors of this famous restaurant is available at JR Kyoto Isetan. The Aioi Gozen in the image is a bento box with a colorful display of a variety of different dishes. It is popular as a bento box that represents the season.

Tagoto is a long-established Kyoto cuisine restaurant with a history of more than 120 years. Tagoto operates several restaurants in convenient locations such as around Kyoto Station and in the Shijo area. At JR Kyoto Isetan, they sell such bento boxes as Ume, a two-tiered bento box filled with colorful dishes, and Daifuku, which is compact but has a good balance of such items as tempura and simmered food.