The Japanese painter and Zen priest Toyo Sesshu (1420-1506) is generally regarded as Japan’s greatest painter. His Zen-inspired paintings are credited with establishing a truly Japanese style of ink painting which had a great influence on all later Japanese painting.

The Muromachi, or Ashikaga, period during which Sesshu lived was profoundly influenced by Zen Buddhism, which had been introduced from China during the Kamakura period. Under its impact the Chinese-style ink paintings of the great masters of the Southern Sung period, especially the landscape painters Ma Yüan and Hsia Kuei and the Ch’an painters Mu Ch’i and Yu-chien, served as models for the Japanese painters. Not only did these artists derive their style from China, but the landscape they represented was also that of South China in spite of the fact that many of them had never been there.

Sesshu was born in Bitchu Province in western Honshu. As a youth, he became a Buddhist novice at the Shokoku-ji, a well-known Zen temple in Kyoto which was not only a famous Buddhist sanctuary but a celebrated cultural center as well. At the monastery young Sesshu came under the influence of the famous painter Shubun, who was a fellow monk, and the Zen master Shunrin Suto, who became his spiritual adviser.

Little is known about Sesshu’s early artistic work prior to his journey to China (1467-1469), during which he visited Buddhist monasteries and traveled as far as Peking. Although the artist was well received and also much impressed by the grandiose landscape, he was disappointed with the state of painting in Ming China, which to his way of thinking compared unfavorably to the painting of the Sung period some 2 centuries earlier.

Returning to Japan in 1469, Sesshu moved from place to place in northern Kyushu to avoid the civil war which was raging in Kyoto and finally settled in Oita, where he enjoyed the patronage of the Otomo family. His friend, the monk Bofu Ryushin, in commenting upon Sesshu’s position at this time, reported that everyone from the nobility to the common people of Oita admired his painting and asked for examples of his work. Between 1481 and 1484 the artist made a long journey through Japan, visiting many parts of the country and making numerous sketches of the landscape.

After Sesshu returned to western Japan, he settled at Yamaguchi in Suho Province, where he set up the Tenkaitoga-ro studio and enjoyed the patronage of the Mori family. He spent the remainder of his life at Yamaguchi, enjoying ever-growing fame as Japan’s leading artist. 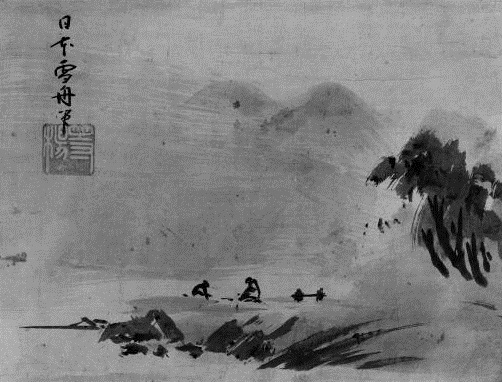 His fame during his lifetime was enormous, and many of his disciples use to sign their own works under the name of Sesshū, which makes the attribution of certain works quite difficult. However, six paintings have been firmly attributed to the master (all of them declared National Treasure in Japan), being the most famous of them the Sansui Chokan (Long Scroll of Landscapes), a 15 meters (50-feet) scroll depicting the four seasons (spring, summer, autumn and winter).

But perhaps the most audacious work attributed with certainty to Sesshu Tōyō is a vertical scroll known as “Haboku-Sansui”. This landscape is painted with a technique known as “broken ink”, “splashed ink” or “spilled ink”, which creates works with a remarkable degree of abstraction of forms, as well as a characteristic freedom of brushwork. With his masterful use of ink, of which “Haboku-Sansui” is a stunning example, Sesshu was able to create a genuine Japanese style of painting that was continued by many other painters during the following centuries. 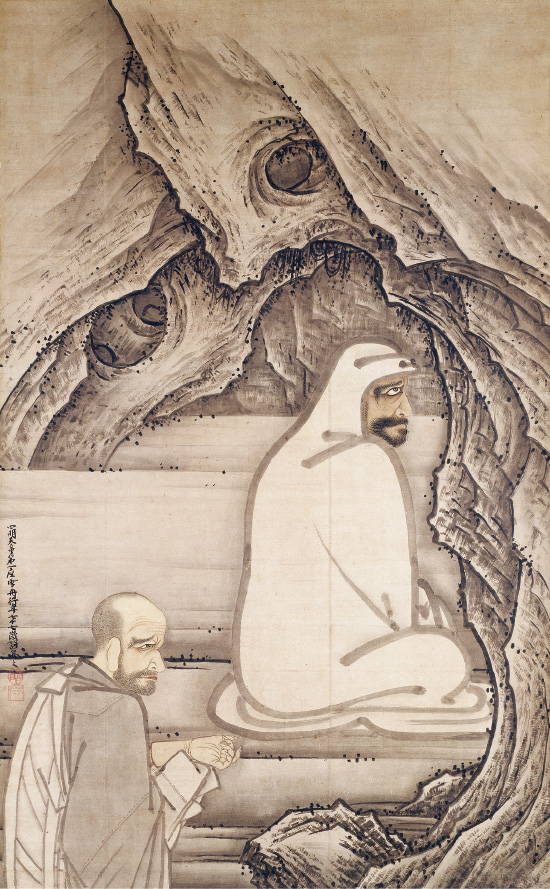 Although Sesshu remained a Buddhist monk all his life and his landscape painting was religious in inspiration, several of his other works are Zen paintings in a more specific sense. Among these is a large scroll painted in 1496 (collection of the Sainen-ji, Aichi prefecture). It depicts Huiko cutting off his arm to demonstrate his will power to the founder of Zen, Bodhidarma, or Daruma, as he is called in Japan. Both the bold, inspired brushwork of the picture and the choice of the subject matter are typical of Zen Buddhist thought. The portrait of Daruma, with bushy eyebrows and a fierce expression, reveals his spiritual power in a masterful way.