A wide variety of fruits are available in Japan, many of which have been introduced from abroad and are recognizable to foreigners while others are native to Japan and not as well known outside of East Asia. The most common way to encounter fruits in Japan is as dessert at the end of a meal.

There is a stereotype that fruits in Japan are outrageously expensive. The stereotype is wrong in that regular fruits in regular supermarkets are generally reasonably priced like elsewhere in the world. Nonetheless, there is a relatively large market for luxury fruits, and many foreign visitors are surprised when they see premium melons in department stores that cost over 10,000 yen.

Below is a list of some of the most popular Japanese fruits:

Nashi (Japanese Pear)
Although nashi are quite similar to Western pears, there are a number of significant differences. Compared to the Western pear, nashi are larger, crispier and have a similar but lighter taste and a rougher skin. Furthermore, they are spherical rather than “pear-shaped”.

Nashi are in season during the late summer and autumn and are generally eaten peeled. They have been cultivated by the Japanese since pre-historical times. Western pears are also available in the country, and are known as yonashi (Western pears).

Ringo (Apple)
Widespread cultivation of apples in Japan began in the Meiji Period (1868-1912). Today it is one of the most popular fruits in Japan, and one of the few fruits that are exported overseas in large quantities. In Japan, apples are generally eaten raw after peeling. They are in season during autumn and early winter.

Among the many apple varieties, the large, red and crispy fuji apple is most popular. Often believed to have been named after iconic Mount Fuji, the apple is actually named after the small town in Aomori Prefecture where it was cultivated in the 1930s. To this day Aomori is Japan’s leading apple producing prefecture, and the city of Hirosaki, in particular, is closely associated with the fruit.

Kaki (Japanese Persimmon)
Kaki are similar to nashi and apples in their shape, size, crispiness and the way they are eaten. Kaki are most commonly enjoyed raw after being peeled and cut into pieces. But they are also dried and eaten, similar to figs.

Kaki are in season in late autumn and winter when they are often seen hanging on otherwise barren trees. Originally coming from China, kaki have been cultivated in Japan since the 7th century.

Mikan (Mandarin Orange)
Mikan are the most popular type of Japanese oranges, which are generally known as kan (some other orange varieties are iyokan, ponkan, etc.). Mikan peel easily and do not have seeds and are widely popular as a dessert or snack when they are in season in early winter.

Mikan were introduced to Japan from China about 400 years ago, from where they traveled to the West and became known as mandarin oranges.

Yuzu
Yuzu are sour, lemon sized fruits that have a distinctively Japanese fragrance. While yuzu have little pulp, their juice is often used in seasoning and their rind is used as a garnish. Another interesting use of yuzu traditionally occurs on the winter solstice, when they are placed into hot baths for fragrance and various health benefits.

Yuzu were introduced to Japan from China during the Asuka Period (538-710). Today they are mostly grown on the island of Shikoku. Yuzu are in season during the winter.

Sudachi
Sudachi are small and sour lemon-like fruits, similar to yuzu. However, sudachi are considerably smaller than yuzu, are green rather than yellow, and are pulpier. Sudachi are often squeezed over grilled fish.

Sudachi have been part of Japanese cuisine since the country’s early history. The fruit is closely associated with Tokushima Prefecture, where the majority of sudachi are produced. Sudachi are in season during the winter.

Kinkan (Kumquat)
Kinkan are small orange-like fruits that are usually eaten whole without peeling. They have a pleasant sourness that is not as powerful as that of yuzu or sudachi and have a substantial amount of pulp as well as a few seeds. Kinkan are also used to make marmalade and a sweet type of liqueur. They are in season during the winter.

Like the other citrus fruit listed above, kinkan originated in China. Domestic kinkan are produced mostly on the island of Kyushu, particularly in Miyazaki Prefecture.

Peaches were introduced from China as early as the Yayoi Period (300 BC- 300 AD). Peach production in the prefectures of Yamanashi and Fukushima make up the majority of the country’s total output. The peach features prominently in the Japanese folklore tale of Momotaro (The Peach Boy), which is set in Okayama Prefecture.

Sakuranbo (Cherry)
Most flowering Japanese cherry trees do not produce edible fruits. Instead, the edible cherry fruit was introduced to Japan from the West in the beginning of the Meiji Period (1868-1912). The satonishiki cherry was cultivated in Japan in the early 1900s and named after its cultivator Sato Esuke. Satonishiki are bright red and remain the most popular Japanese cherry today.

Cherries are in season during mid-summer. The majority of domestic cherries are produced in Yamagata Prefecture, where the satonishiki cherry was cultivated and the fruit is celebrated as a local symbol. Darker colored “American Cherries” are also widely available in Japanese supermarkets.

Ume (Japanese Plum)
Ume is usually translated as “plum”, even though the fruit has botanically more in common with the apricot. Ume are rarely eaten raw, but are most commonly pickled into umeboshi (see photo to the left) and eaten with a bowl of white rice or inside rice balls (onigiri).

Ume are also used to produce umeshu or “plum wine”, a popular sweet liqueur. Ume is in season during the early summer, and lends its name to the rainy season (tsuyu or “plum rain” in Japanese).

Contrary to the flowering cherry trees, the flowering plum trees of Japan also produce the edible ume fruits. Three months before the fruit is ripe, the blossoms of the plum trees open and are celebrated similar to the cherry blossoms. The culture of plum trees and blossoms originated in China, and was introduced to Japan in early times, while umeboshi were already being eaten by the Nara Period (710-784).

Ichigo (Strawberry)
Strawberries in Japan are not fundamentally different from those in the West, but the large, sweet, attractive and ultimately expensive varieties are preferred. The berries are incorporated into Western style cakes and pastries, but they are also commonly enjoyed on their own. Strawberries are in season during late winter and early spring.

Strawberries were introduced to Japan from the West in the mid 1800s, but cultivation did not begin until around 1900. Nowadays strawberries are grown throughout the country. Fruit picking has become a popular activity at many farms during the spring.

Budo (Grape)
Japanese grapes are similar to Japanese strawberries, in that they do not differ much from their Western counterparts, and the large, sweet, attractive and ultimately expensive varieties are preferred. The main difference is that the skin of Japanese grapes are usually quite thick, and the grapes are therefore peeled before being eaten.

One of the most popular Japanese varieties of grapes is the dark purple Kyoho grape, which is particularly large. Grapes are usually eaten on their own, but are also used for making wines. Grapes are in season during late summer and early autumn.

Grapes were initially introduced to Japan from China around the Nara Period (710-784). A more recent wave of new varieties arrived from the West in the late 1800s. Sunny Yamanashi Prefecture is Japan’s leading grape growing and wine producing region. 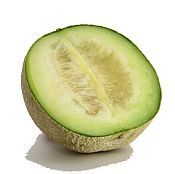 Melon
Melons are the prototypical luxury fruit in Japan, and can be sold for over 10,000 yen per piece. Nonetheless, moderately priced melons are more common. A wide variety of melons is available in Japan, including green fleshed melons like muskmelons, orange fleshed melons like cantaloupes and even white and yellow fleshed varieties.

Melons are usually cut open and the flesh of the fruit is enjoyed raw at the end of a meal. Melons are available to purchase as a whole fruit or in slices, and are in season during the late spring and summer

After their introduction to Japan, melons were grown in greenhouses during the Taisho Period (1912-1926). Melons are often associated with Hokkaido, particularly the town of Yubari, whose eponymous Yubari melons are among the most highly valued in the country.

Suika (Watermelon)
Watermelons are the representative fruit of summer. Like their Western counterparts, they are large in size with a hard rind and a sweet, crunchy, juicy flesh. The first seedless watermelons were created in Japan in the 1930s, and nowadays there are also small numbers of square shaped and other highly priced premium exemplars.

Watermelons were introduced to Japan from China in the beginning of the Edo Period (1603-1867). There is a traditional summertime game called suika-wari (watermelon splitting), where a watermelon is placed on the ground and participants take turns being spun around and trying to split it open with a stick. The game is often played on the beach.

Kiwi
Kiwi in Japan differ very little from the kiwi sold elsewhere in the world. The fruit is made up of an exterior thin, hairy, brown skin with a juicy, green, tart flesh inside. Kiwi are usually eaten raw with the skin removed. Domestic kiwi are in season during the late winter and early spring, but imported kiwi are available all year round.

Although the kiwi fruit originated in China, it was never widely cultivated there, and it was not until the 20th century that the fruit was brought to New Zealand and grown there in large numbers. In the 1960s, kiwi were introduced to Japan and they have since become quite popular. Although a fair number of kiwi are now grown domestically, the majority of the fruits are imported from New Zealand.

Ichijiku (Fig)
Figs in Japan are usually peeled and eaten raw, but they are also popular in their dried form or are processed into jams. Figs are in season during late summer and early fall.

Figs made their way to Japan from the Mediterranean in the early 1600s via China, when the fruit was also known as “foreigner’s kaki“. The vast majority of figs in Japan are of the Masui Dauphine variety, which is a relatively large type of fig and is named after Mr. Masui who cultivated the fruit in the early 1900s.