The Miyako Odori is a Geisha dance performance held the month of April in Kyoto.

Japan’s geisha are famous the world over, but as they usually perform only at small private gatherings in the teahouses of the geisha districts, it’s not often that visitors from overseas get to see them. Even having deep enough pockets to pay for a private geisha party isn’t good enough – you need an introduction from an existing client in order to gain admittance to the private and exclusive world of the geisha. Fortunately, Kyoto’s geisha communities put on annual public shows, which provide an opportunity for less-privileged ordinary people to see the geisha perform their arts. The most famous of these performances is the Miyako Odori, at which the geisha of the Gion Kobu geisha community perform.

‘Miyako’ means capital city, and ‘Odori’ means dance, so ‘Miyako Odori’ translates literally as ‘Capital City Dances’, which makes sense when you consider that Kyoto used to be the capital of Japan, and that ‘Kyoto’ is still written with characters meaning ‘capital city’. In English the dances are often referred to as ‘The Cherry Blossom Dances’, because they take place in April when the cherry blossoms are in bloom, or sometimes just as ‘The Kyoto Dances’.

Despite the name, the dances began in 1872, four years after Tokyo took over as the capital of Japan. That was the first time that Gion Kobu’s nationally-famous geiko performed in public. Since the second season in 1873, the dances have been held at the Gion Kobu Kaburenjo Theatre, and they continue to be popular with both Kyoto locals and visitors to the city. There are four hour-long performances each day, at 12:30pm, 2pm, 3:30pm and 4:50pm. This schedule is maintained every day throughout the whole of April – making the dances extremely hard work for the geiko and maiko – especially as they are expected to produce a flawless performance every time. 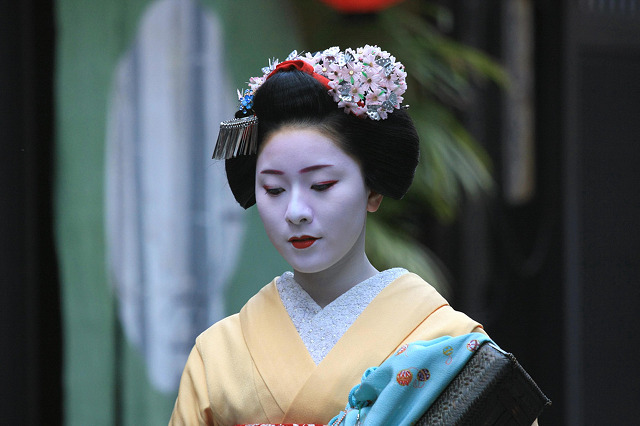