Shinto (“the way of the gods”) is the indigenous faith of the Japanese people and as old as Japan itself. It remains Japan’s major religion alongside Buddhism.

Shinto does not have a founder nor does it have sacred scriptures like the sutras or the Bible. Propaganda and preaching are not common either, because Shinto is deeply rooted in the Japanese people and traditions.

“Shinto gods” are called kami. They are sacred spirits which take the form of things and concepts important to life, such as wind, rain, mountains, trees, rivers and fertility. Humans become kami after they die and are revered by their families as ancestral kami. The kami of extraordinary people are even enshrined at some shrines. The Sun Goddess Amaterasu is considered Shinto‘s most important kami.

Some prominent rocks are worshiped as kami.

In contrast to many monotheistic religions, there are no absolutes in Shinto. There is no absolute right and wrong, and nobody is perfect. Shinto is an optimistic faith, as humans are thought to be fundamentally good, and evil is believed to be caused by evil spirits. Consequently, the purpose of most Shinto rituals is to keep away evil spirits by purification, prayers and offerings to the kami.

Shinto shrines are the places of worship and the homes of kami. Most shrines celebrate festivals (matsuri) regularly in order to show the kami the outside world. Please read more on our special information pages about shrines and festivals.

Shinto priests perform Shinto rituals and often live on the shrine grounds. Men and women can become priests, and they are allowed to marry and have children. Priests are aided by younger women (miko) during rituals and shrine tasks. Miko wear white kimono, must be unmarried, and are often the priests’ daughters.

Important features of Shinto art are shrine architecture and the cultivation and preservation of ancient art forms such as Noh theater, calligraphy and court music (gagaku), an ancient dance music that originated in the courts of Tang China (618 – 907). 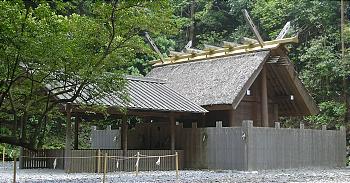 The introduction of Buddhism in the 6th century was followed by a few initial conflicts, however, the two religions were soon able to co-exist and even complement each other. Many Buddhists viewed the kami as manifestations of Buddha.

In the Meiji Period, Shinto was made Japan’s state religion. Shinto priests became state officials, important shrines receive governmental funding, Japan’s creation myths were used to foster a national identity with the Emperor at its center, and efforts were made to separate and emancipate Shinto from Buddhism.

After World War II, Shinto and the state were separated.

People seek support from Shinto by praying at a home altar or by visiting shrines. A whole range of talismans are available at shrines for traffic safety, good health, success in business, safe childbirth, good exam performance and more.

A large number of wedding ceremonies are held in Shinto style. Death, however, is considered a source of impurity, and is left to Buddhism to deal with. Consequently, there are virtually no Shinto cemeteries, and most funerals are held in Buddhist style.

How to Visit a Shrine

1. Before passing through the “torii”, or the gateway, make sure you keep yourself clean and tidy .Behave calmly and respectfully. Traditionally, you are not supposed to visit a shrine if you are sick, have an open wound or are mourning because these are considered causes of impurity.

2. Slightly bow in front of the “torii” to show respect.

4. You walk along the left side of the pathway to show modesty and proceed to the main sanctuary. This is because the middle part is said to be the pathway for kami, or god.

5. In front of the sanctuary, quietly toss any amount of money you wish (I would throw 5 yen because “goen” which is 5 yen in Japanese, has also a meaning of good fate). The amount doesn’t matter as long as you have sincere gratitude. Ring the bell; this is like a doorbell to catch the attention of the deity. At first, bow twice to greet kami. Then clap twice, and make a pray with your both hands together. At last, bow again to show gratitude towards the deity. This series of action is the worship of the kami that is said to be stored in the innermost chamber.

6. Withdraw from the sanctuary. When passing through the torii, turn around and slightly bow again to show respect. You must keep in mind that visiting a shrine is like visiting kami.

Photography is usually permitted at shrines. Watch for signs.