No stay in Japan is complete without going to an onsen, or natural hot spring. Bathing in one of Japan’s famous onsen is one of the most relaxing experiences on this planet, as you will feel the hot springs’ water warm you to the core, healing your tired body. While many first-timers might be intimidated by being fully nude in front of other bathers, strip away your fear along with your clothes and feel truly refreshed and reinvigorated.

If there’s one thing Japanese people love, it’s baths. You’ll notice that at most Japanese houses, the bath is separate from the shower, as people look forward to relaxing in hot water at the end of the day and soothing their stresses accumulated in everyday life. There’s even a Japanese phrase, hadaka no tsukiai (literally “naked relationship”), that refers to how interpersonal bonds are strengthened by bathing together, hiding nothing from each other.

The first instances of people bathing in onsen date back to the 7th century, and it has become the prime form of leisure for Japanese people since. However, an onsen is just not any regular bath – bathing in an onsen has many health benefits, due to its many minerals. Many onsen (according to legend) were discovered when people saw wounded animals bathing in them to heal themselves, while samurai would use onsen to treat their battle scars. One of the most volcanically active countries in the world, there are thousands of onsen all over Japan, though the majority are found in the countryside. It’s not a stretch to say that no two onsen are the same, as each has its own unique mineral composition, charms, and specialities.

On maps, onsen are usually marked with the kanji for hot water 湯 (yu), the hiragana ゆ, or the symbol ♨, while many are also annexed to Japanese ryokans and hotels.

Not all baths are tattoo friendly, so it is best to consult the new website for those that are: https://tattoo-friendly.jp/

Onsen and public baths in Japan come in a variety of forms, each with their own special characteristics.  Below are the types of baths you may come across:

Onsen (温泉) — Often translated to English as “hot springs.”  Technically, an onsen must be warmer than 25 degrees Celsius and contain at least one of 19 elements designated by the official Japanese “Onsen Law,”, including lithium, sulfur, sodium chloride, and iron.  Onsen that naturally meet these conditions with water from geothermicaly heated springs are called tennen onsen (天然温泉), or “natural onsen,” as opposed to jinko-onsen (人工温泉), or “man-made onsen,” which meet the conditions artificially.  Usually classified as either volcanic or non-volcanic.

Roten-buro (露天風呂) — An outdoor onsen, where you can bathe and relax while being surrounded in the tranquil natural beauty of Japan.  Can also be called noten-buro (野天風呂).

Sento (銭湯) — A public bath; different from onsen in the sense that sento are composed of heated tap water instead of with special minerals.  Often used by locals as well, and more common in major cities than onsen.

Super-sento (スーパー銭湯) — A “public bath theme park” of sorts, often housing a wide variety of facilities, such as baths of different styles, and mineral compositions (often artificial), saunas, massages, restaurants, resting area, and so on. Osaka’s Spa World is a prime example.

Dai-yokujo (大浴場) — Often refers to the big bath at a hotel orryokan, and may or may not be an onsen (i. e. containing the designated minerals). May also be called yokujo (浴場).

Ashi-yu (足湯) — A foot bath. These can be found on the streets and are usually free of charge at some onsen villages and resort towns. A convenient and quick way to warm up.

Utase-yu (打たせ湯) — An onsen in which water splashes down like a waterfall; bathers sit under the waterfalls so that the water hits down on them like a massage of sorts.  An example is Sachi-no-yu Onsen.

Mizu-buro (水風呂) — A cold bath, usually annexed to the main bath at an onsen or sento.

How to Bathe in an Onsen

Pay the entrance fee and any other fees, such as for towel rentals and soap (this may sometimes be via a ticket machine).

Remove all clothing and accessories in the changing area and put them in one of the baskets or lockers.

Enter the bathing area but only bring your hand towel with you.

Almost all showers are equipped with a stool and bucket. Grab a bucket and scoop water from the bath and pour it onto yourself (roughly 10 times), starting with your feet and legs before making your way up to your head.

Wash your body thoroughly with soap, using the hand towel. Sit on the stool to prevent water splashing into the onsen. If there is no shower (at certain old hot springs), you may enter the bath after the previous step.  Rinse and wring the hand towel when finished.

Enjoy and relax in the onsen, but be careful when entering; onsen are usually 40–44 degrees Celsius. Slowly enter the bath, starting from your feet and knees, and gradually working your way up to your shoulders.  Bathe for about 5~10 minutes before sitting on the rim of the bath to rest, and repeat this two or three times; bathing more than 30 minutes total may be dangerous.

Wipe your body down as much as possible with the hand towel before re-entering the changing area.

Almost all onsen require an entrance fee; prices can range from 200 to 2,000 yen (usually between 400 and 800 yen). Sento are usually cheaper, while super-sento tend to be more expensive because of the greater number of facilities.

Many onsen provide rental body and hand towels for a fee of around 300 to 500 yen, although you are free to bring your own.

Most provide soap and shampoo, but if they do not and you did not bring your own, you are required to purchase them as well.

Many (but not all) ryokans and hotels open their onsen to the general public, usually for a fee — just because you aren’t staying there, it doesn’t necessarily mean you can’t use their onsen.

Go to the bathroom beforehand; most changing rooms do not have a toilet.

The majority of onsen have separate baths for males and females; be sure to set a meeting time and place beforehand.

Some baths have designated times for different genders; be sure you are bathing during the correct time slot. Very few onsen today are konyoku (混浴), or mixed baths for both sexes (expect for kashikiri-buro).

It is recommended that you drink some water beforehand to prevent dehydration. On the other hand, do not drink too much alcohol before bathing; the majority of onsen will ask you to leave if you are intoxicated.

It is also encouraged that you refrain from eating before bathing.

If you are staying at a ryokan, rest for about 30 minutes in your room before making your way to the onsen.

While some onsen have relaxed the restrictions, as a general rule if you have a tattoo you are either required to cover it or are prohibited from using the bath altogether. In Japan, tattoos are associated with the Japanese mafia (yakuza). if you have a small one, I suggest bringing a bunch of waterproof band aids and covering them up before you go.

Showering before bathing is a must – the bath itself is meant for relaxing, not washing.

Watch your step while walking; the floor can tend to get slippery due to the onsen water’s minerals.

Though a handful of onsen allow you to wear a towel (especially for females), as a general rule you are not allowed to wear anything inside the bathing area, as mentioned before.

Do not put anything other than yourself in the water; place your hand towel on your head or to the side. If it accidentally falls into the bath, be sure to wring it dry outside the bath.

You are allowed to cover up with the hand towel for modesty before entering the bath.

Many onsen have more than one bath, usually of varying mineral compositions; you are free to try as many as you want (some may charge extra fees), and you only need to shower before entering the first bath.

Most people will enter and relax in the most spacious part of the bath – though people will not necessarily sit near the direct water source as it can be relatively hot.

If you use the sauna, sit on your hand towel. Be sure to take a cold shower or use the cold bath afterwards.

Do not bathe consecutively for too long; leave the bath immediately if you start feeling dizzy or nauseous. You are allowed to sit on the rim of the bath in between soaking periods.

Photography is not allowed at most onsen; check with the staff beforehand.

Normal conversation is perfectly fine while bathing, but be considerate of others and do not make too much noise.

Diving into, splashing, and swimming in the bath is prohibited.

It is recommended that you do not shower after bathing in an onsen, as rinsing your body will weaken the minerals’ healing effects. However, taking a quick cold shower or bath upon leaving the bath, which has its own health benefits, has also been recommended.

In addition to soap and shampoo, most onsen have amenities such as combs and hair dryers in the changing rooms.

In Japan, one popular post-bath custom is to drink milk, with many onsen and sento selling it. Take this opportunity to try a refreshing bottle of fruit gyuunyuu (“fruit milk”) or coffeegyuunyuu (“coffee milk”).

Another onsen speciality is onsen egg (onsen tamago), egg slow-cooked in onsen water and steam. Some places even sell their own bottled onsen water to drink.

Many onsen and hotel lounges have a rest area; take advantage of the comfortable couches and massage chairs.

It is encouraged that you drink water, tea, or a sports drink after bathing, in order to avoid dehydration.

Drinking alcohol immediately after bathing is not recommended; it will dehydrate your body even further.

As relaxing as bathing in onsen can be, it is generally recommended that you do not bathe more than three times a day. 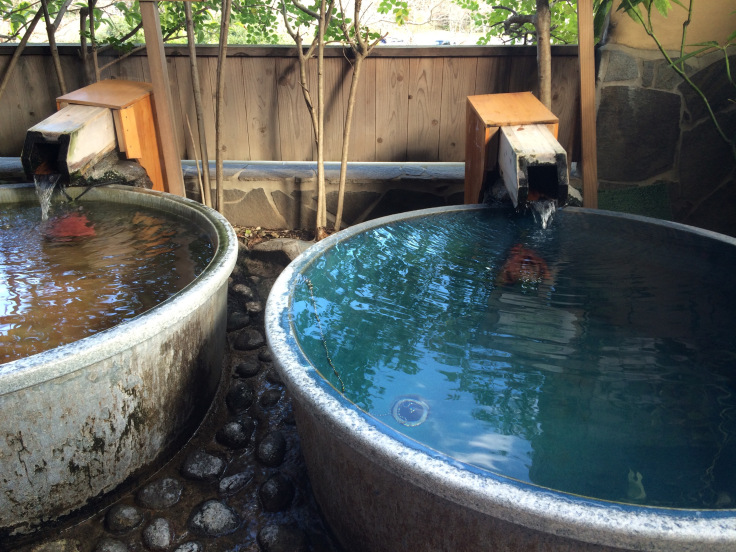 If you go early and do the 2hour hike from Kibune town to Kurama, you can make this onsen the dessert after your hike. The hike is beautiful and dotted with wonderful temples. Kuramadera temple is very special. This onsen also runs a free shuttle bus every few minutes picking up from the Kurama station and back, otherwise it’s a 10 minute walk from the station. It’s a very simple bath house, one indoor pool and a lovely, simple rotenburo that looks out to the hillside of Kurama’s mesmerizing trees and sky.

This onsen is close to Uji, (matcha tea town!). Pair it with a day of sight seeing in Uji, only 30 minutes away or so from Kyoto, and you will have a really beautiful and relaxing day. This onsen is new, clean. They have many different types of baths, a sauna, a steam room with salt you can use to scrub your body smooth, a great cold plunge, lovely rotenburo. The two outdoor ceramic tubs overflow when you get in. Nice view of the sky from the outdoor tubs. This onsen also offers massage, massage chairs, a tatami mat room to relax in with magazines and books, and a great and affordable restaurant.