Kodo – The Way Of Incense 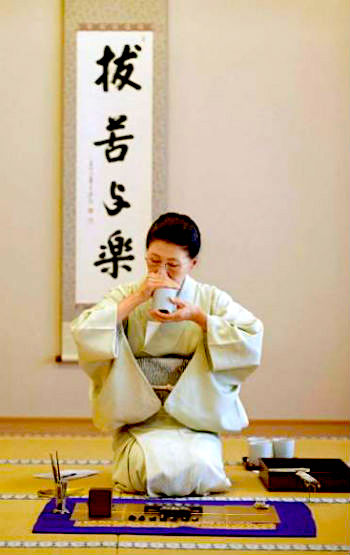 Kodo literally means “way of the fragrance.” Along with sado (tea ceremony) and kado or ikebana (flower arrangement), it is one of the three major classical arts that any woman of refinement was expected to learn. Kodo is perhaps the least well-known of the three, but these days its modern cousin, aromatherapy, is all the rage.

When practicing kodo, a mica plate is placed on top of smoldering coals and the incense or fragrant wood is placed on the plate. So the wood is not actually burned, but gives off its fragrance in a subtle way.

It may seem to be all about the sense of smell, but the secret of kodo is in “listening.” The participants don’t “smell” (the Japanese verb ‘kagu‘) the incense or fragrant wood, but rather “listen” (kiku) to it, opening up not so much their nasal passages as their heart and spirit. Modern western psychologists and therapists know about the power of the sense of smell, how a smell can instantly transport a person back to a place from their childhood. In Japan, the burning of incense and prizing of rare scented wood has been transporting people to a different spiritual plane for many centuries.

Fragrant wood is believed to have first been used in Buddhist rituals in the Nara Period (710-794). As such naturally scented wood is very rare and can take centuries to acquire its fragrance, man-made incense came into existence. As with the incense sometimes used in Christian churches, it was thought to have purifying properties. Even today it is used to purify the long wooden memorial tablets that are offered to the deceased as part of a funeral. Smoldering incense sticks (senko) are regularly placed on gravestones or the butsudan, small altars found in many Japanese homes. Kodo was formalized around the time of the shogun Ashikaga Yoshimasa (1443-1490), who asked the scholar Sanjonishi Sanetaka to classify all of the incense that were in use at the time. For this reason, Sanjonishi is considered to be the “father” of kodo.

The fragrances of kodo are divided into rikkoku gomi (lit. six countries, five tastes). The rikkoku are six kinds of fragrant wood: kyara, rakoku, manaka, manaban, sumatora, and sasora. The gomi are the tastes of amai (sweet), nigai (bitter), karai (spicy hot), suppai (sour), shio karai (salty). Becoming able to break down a given fragrance into these different elements takes years of experience and a very refined sense of smell.

Since the Muromachi Period (1336-1573), kodo is said to have ten physical and psychological benefits or virtues:

As in the tea ceremony, practitioners of kodo will gather in a room, in a private house or in a temple, with a floor covered with tatami mats. They sit in the formal seiza style (which soon becomes very uncomfortable for those not used to it) and take turns trying to guess the fragrance prepared by the komoto, or person who burns the incense. They hold the incense burner in one hand, cup the delicate smoke with the other and lift the fragrance to their face. The guessing process makes it seem like a game, though kodo practitioners tend to take this art very seriously and dedicate decades of their life to it. If you think you’d like to find out more about kodo, the best way is to contact a branch of one of the two schools, Oie-ryu and Shino-ryu.