When you visit some of Kyoto’s gardens, you may hear the beautiful sound of water drops emanates from the scenery itself. In traditional gardens at temples and parks throughout Japan, this is the sound of “suikinkutsu” – literally “water koto cave”.
Not unlike glass or metal wind chimes which tinkle in the breeze, the pleasant echo of water drops from a suikinkutsu conjures a calm, cooling sensation rooted in Japanese culture. The zither-like sound recalls the traditional instrument of the koto, hence its name. Also functioning as a drainage device, the suikinkutsu has been called a masterpiece of landscape architecture.

A suikinkutsu underneath the stones at a chozubachi in Nara Park

The origins of the suikinkutsu trace back to artist and master garden designer Kobori Enshu, born to a samurai family in the late 16th century in Kyoto. The suikinkutsu was originally conceived as a drainage device, known as a “tosuimon” for the “chozubachi” stone wash basin, where visitors cleanse their hands and mouth. When ladled water falls to the small stones at its base, calm, cooling tones echo from under the ground. Suikinkutsu can often be found at temple gardens, parks, and outside the entrance of tea rooms.

A suikinkutsu is basically a large earthenware jar with a hole in the base which is then buried upside down as a water collection device. Water falls through the gaps between the small stones, into the hole, and onto the surface of the water pooled at the base of the jar. The sound of the drops reverberates inside the hollow space, creating the unique tones. 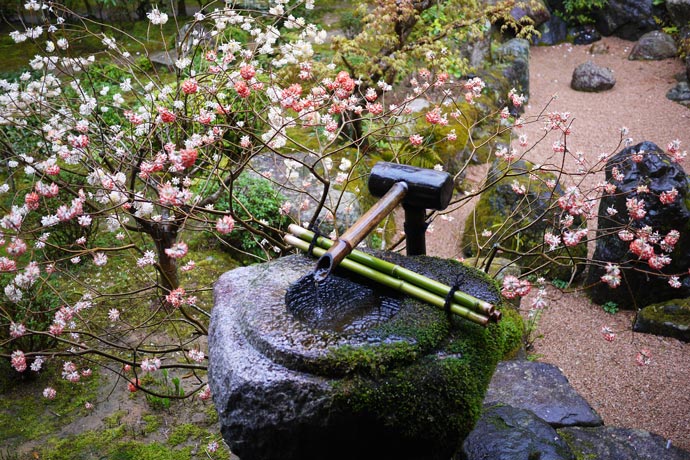 Kyoto is a great bet to search for suikinkutsu at the city’s numerous temples and gardens. Aside from the aforementioned Hosen-in Temple, there are also sonorous suikinkutsu at Enkouji and Taizo-in Temple to name but two. In the nearby ancient capital of Nara, you are welcomed by the Great Buddha of Todai-ji Temple and herds of deer at Nara Park, where a famed suikinkutsu lies.