Is it gazing at them
That makes me recall
So many things in my life:
The cherry blossoms!
–Bashō

Mount Yoshino, Yoshinoyama, in Nara Prefecture, has been Japan’s most famous cherry blossom viewing spot for many centuries. It is said that the first trees were planted along its slopes more than 1300 years ago, and today the mountain is covered by approximately 30,000 cherry trees of many different varieties, especially of the Yamazakura variety. 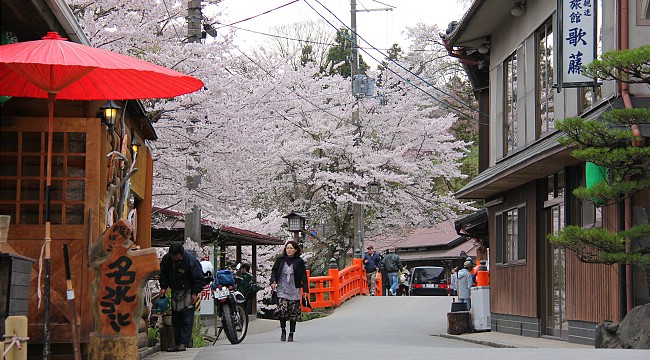 Yoshinoyama’s cherry blossoms typically start opening in late March or early April and reach full bloom around early to mid April. Because of the range of elevation, the blooming season is staggered by a couple of days between the Shimo (lower), Naka (middle) and Kami (upper) Senbon areas as the blossom front gradually moves up the mountain. The trees in the Oku Senbon area open considerably later. Be warned that depending on the weather, the starting date and length of the season can vary quite a bit from year to year.

The Shimo Senbon (lower) area encompasses the base of the mountain around Yoshino Station and the lower part of the town. The Yoshino Ropeway bypasses the steep ascent between the station and the town, but waiting times for the ropeway can get very long during the peak of the season. Lots of cherry trees are planted along the road up to the town, making the ascent on foot an attractive alternative to the ropeway. 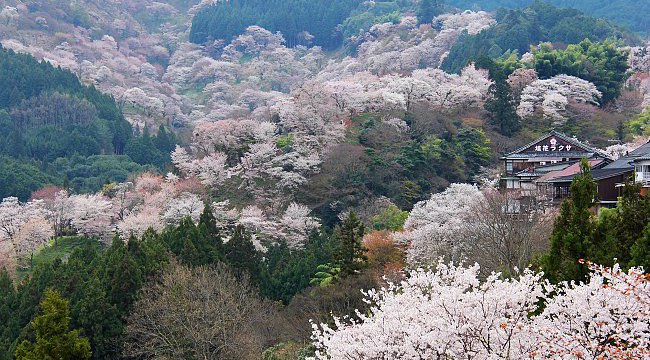 The view from Yoshimizu Shrine

The Naka Senbon (middle) area covers the rest of the town along the ridge of the mountain. This is where the majority of Yoshino’s accommodations, shops, restaurants, temples and shrines are found, including Kinpusenji Temple and Yoshimizu Shrine. The view up the mountain from Yoshimizu Shrine is particularly famous.

Towards the top of the Naka Senbon area lies the Naka Senbon Park, one of the most attractive spots for holding hanami or viewing picnics under the trees. The park spans several small hills that are covered by cherry trees and offer views onto even more cherry trees. Especially in good weather, the atmosphere here is delightful. 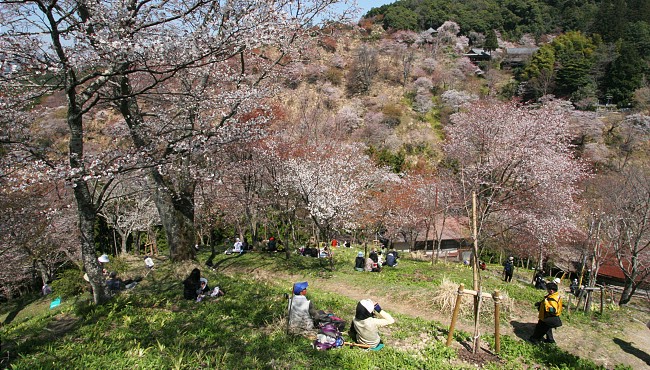 Further up the mountain in the Kami Senbon (upper) area, the town begins to thin out. Kami Senbon tends to be a little less crowded and slightly quieter than the lower parts of the mountain, and several small parks provide nice places to take a break. The most famous panoramic view of Yoshinoyama can be enjoyed from the Hanayagura View Point, about one hour on foot from the upper ropeway station.

The Oku Senbon area has by far the fewest cherry trees and does not offer any views of the cherry tree covered mountain slopes. However, the trees here bloom about a week behind the rest of Yoshinoyama, so it may be worth visiting if you are too late to see the blossoms along the lower slopes. The best hanami spot in the Oku Senbon area is the Takagiyama Observation Deck roughly a 90 minute walk from the ropeway station. 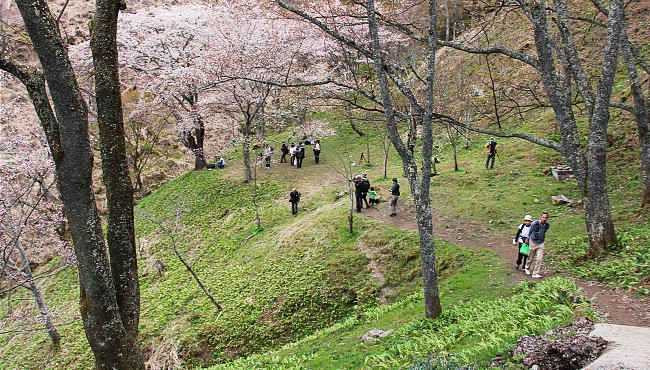 Most of the Shimo and Naka Senbon areas are closed to car traffic from 9:00 to 19:00, while cars are allowed in the Kami Senbon area except on particularly busy days when that area is closed to cars, as well.

How to get to and around Yoshino

One of my favorite days in Japan several years ago was when I went to Yoshino to stay and walked the hills for an entire day. It was after the crowds, peaceful and still beautiful with some remaining blossoms. Small offerings were placed at the poet Saigyo’s hut.

Not stopping to mark the trail,
let me push even deeper
into the mountain!

Perhaps there’s a place
where bad news can never reach me!

How wonderful, that
Her heart
Should show me kindness;
And of all the numberless folk,
Grief should not touch me.