Daitoku-ji is a large walled temple complex in northern Kyoto and the head temple of the Rinzai sect’s Daitoku-ji school of Japanese Zen Buddhism. The complex consists of nearly two dozen sub-temples and is one of the best places in Japan to see a wide variety of Zen gardens and to experience Zen culture and architecture.

Daitoku-ji was founded in 1319 and like most of Kyoto suffered severe damage during the Onin War (1467-1477). After its reconstruction, the temple grew into a center of the tea ceremony and became associated with tea master Sen no Rikyu, as well as the warlords Oda Nobunaga and Toyotomi Hideyoshi, both of whom were fond tea ceremony practitioners. Oda Nobunaga’s grave is located at Sokenin, one of Daitoku-ji’s sub-temples that is not regularly open to the public. 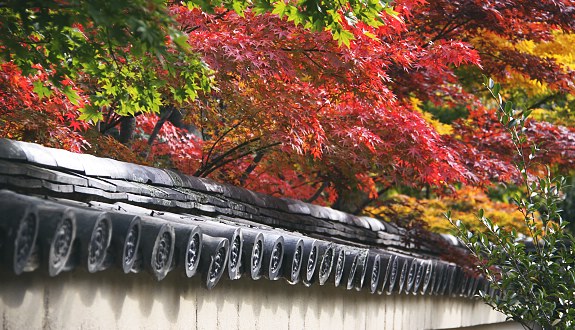 Daitokuji’s main buildings (the Sanmon Gate, Butsuden Hall, Hatto Hall and Hojo Residence) are lined up on the east side of the temple grounds according to the classical layout of a Zen monastery. They are not usually open to the public, however visitors may view into the interior of the Butsuden.

The main buildings are surrounded by nearly two dozen sub-temples, many of which were added to the complex by feudal lords from across Japan. Four of the sub-temples are regularly open to the public, while some of the others have temporary special openings.

The most celebrated among the sub-temples is Daisen-in, the head of the North School of Daitoku-ji and open to the public around the year. Founded in 1509, it incorporates the oldest surviving example of an alcove (tokonoma), an important architectural feature still found in contemporary tatami rooms today, as well as some highly valued sliding doors (fusuma).

Daisen-in also features beautiful rock gardens, which wrap around the temple building and are considered among the best examples of their kind. One of the gardens is designed to resemble a Chinese landscape painting with vertical stones representing towering mountains and islands divided by white sand waterfalls and streams which appear to flow through to the temple’s other gardens before emptying out into an expansive ocean of white gravel.

Another important sub-temple open to the public is Ryogen-in, the headquarters of the South School of Daitoku-ji. It was constructed in 1502 by the lord of Noto Province on the Noto Peninsula in current day Ishikawa Prefecture. The temple’s main building, the former residence of Ryogen-in’s head priest, is designed in a typical Zen style and is said to be the oldest building standing in Daitoku-ji.

Ryogenin features as many as five different dry landscape gardens on each side of its main building. The largest of them consists of a field of raked white gravel representing the universe, and islands of rocks and moss representing a crane and a turtle, symbols of longevity and health commonly found in Japanese gardens. The temple also displays sliding doors (fusuma) painted with images of dragons and hermits, as well as the oldest gun in Japan, a Tanegashima Musket made in 1583.

Koto-in is another interesting and popular sub-temple that is open year around. It was built in 1601 by Hosokawa Tadaoki, a successful commander who fought for all three unifiers of Japan, Oda Nobunaga, Toyotomi Hideyoshi and Tokugawa Ieyasu, and took part in many of the famous battles and campaigns of the era. He and his wife are buried at Koto-in, along with Izumo no Okuni, the founder of kabuki.

Koto-in is famous for its maple trees which form a vaulted canopy over the temple approach. The maples are also found extensively throughout Koto-in’s tea garden and are used with sparse simplicity in the temple’s tranquil moss garden. The leaves are particularly spectacular around the second half of November when they usually reach the peak of their autumnal beauty. 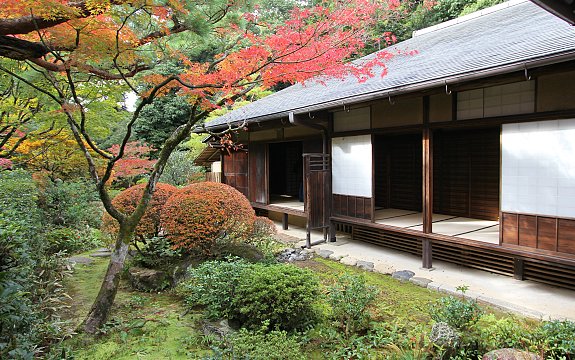 Despite being the smallest of the regularly open sub-temples, Zuiho-in has an equally rich history as the other sub-temples of Daitoku-ji. The temple was built in 1535 by a warlord from Kyushu, who later converted to Christianity and became known as a Christian Daimyo (Warlord).

The temple’s main garden features gravel raked in distinct, high peaked patterns evoking the image of rough seas, and is set with islands of sharp stones and moss that appear off in the distance. The garden to the rear of the main building has stones laid out in the pattern of a crucifix. 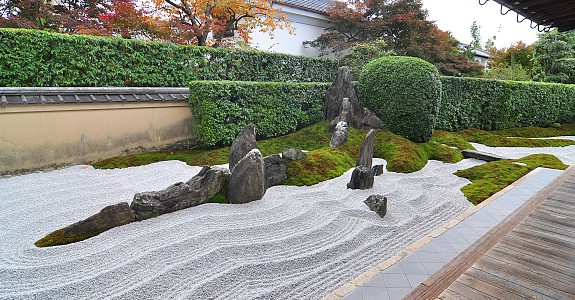