The Japanese sword, otherwise known as nihonto, is a traditional craft that has been produced in Japan for 1,000 years. While it was originally made as a weapon, now the role of weapon has ended and many people appreciate the Japanese sword as a beautiful art object. Its shape is refined with a gentle but not simple curvature. Pale white patterns on the edge are called hamon, which are different on every blade. Forged by hand, there are no completely identical Japanese swords in the world, even though the same swordsmith may have made the blades.

The sword is made of high-quality tama-hagane, or Japanese steel that is manufactured from smelting sand-iron and charcoal together in a clay furnace using a traditional method called tatara. The Japanese sword is characterized by the qualities of “not break and not bend.” In fact, it is very difficult for these two properties to co-exist. High-carbon-concentration steel is hard but relatively weak and easy to break. On the other hand, steel with a lower carbon concentration is “sticky” and difficult to break but easy to bend.

The Japanese sword uses soft steel (shingane) layered with hard and pure steel (kawagane) to prevent bending. Each steel element is heated to a red-hot heat, hammered, and folded to harden repeatedly (tanren). In this way, the carbon concentration is sophisticatedly adjusted through many layers. Finally, the sword body is heated and rapidly quenched in water in the tempering stage (yakiire). Through this process, the steel of the blade becomes harder and the edge keener. Then, the sword is sent to be polished by a polisher.

There are several schools of Japanese sword-making and each school’s way is different. And individual swordsmiths also have their own methods. Thus, if you carefully inspect a sword, you can find out when (historical era), where (region) and by whom it was made.

“Japanese sword has long held a sacred place in the history of Japan as a nation and as a people. The symbolism of the elements used in its construction, the manner in which it is crafted, and the purposes for which it is wielded have all been used to instruct generation after generation in matters such as religion, morality, valor, love, wisdom, and compassion. The Japanese sword has long been used as pedagogical tool meant to cultivate the ideals for humanity in the soul, heart and mind of the pupil.

Today, legends long told and legends yet untold work to keep the Japanese sword as something revered not only in the hearts of the Japanese people but in the hearts of people from all over the world. It is with this in mind that Tozando approaches Japan’s master sword smiths in order to meet the requests and needs of the customers throughout the world. We can think of Japanese sword in no other way, and we hope that you can appreciate our dedication to our history and to our future.”

All shinsakuto ordered from Tozando are crafted by nationally recognized Masters of Japanese Cultural Arts – an honor and award issued by the Japanese government. Each shinsakuto is custom made to your exact specifications in accordance with tradition. Please note that the custom-made Shinsakuto prices usually starts from approx. 850,000JPY. 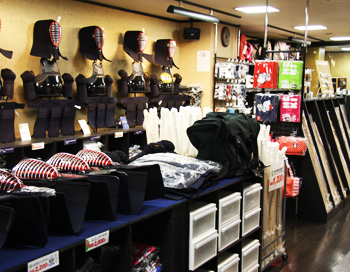 The Nishijin Main store sells a variety of Kendo products, such as Bogu (and Bogu parts), Shinai, Gi, Hakama, Bokken and accessories. This is partly where our craftsmen, including Mr. Nakata Takumi, assemble and make our Bogu and make repairs. This is also where our tailor-made Hakama and Zekken are made and we also offer embroidery service for products bought in the store.

The Nishijin Store is open from 10.00-18.00 everyday of the week. English speaking representatives are available from Monday thru Saturday. 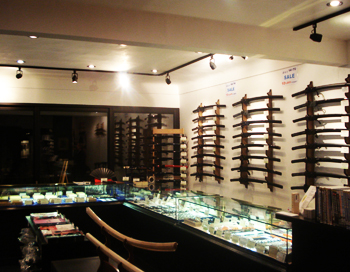 Shogoin Store
The Shogoin Store is located close to the Butokuden, also called the Kyoto Budo Center, one of the oldest budo training halls in Japan. The Shogoin Store specializes in Iaido equipment, including Iaito, Gi, Hakama, but also has equipment for a variety of Budo. On the second floor we also have many Yoroi (samurai armor) and antique Katana on display and for sale. They also have a variety of Aikido, Judo and Karate products, including Bokken, Naginata, Yari.

Shogoin store is open from 10.00-19.00 everyday of the week. English speaking representative standing by.