This dealer, kabayaki uri, could carry his “shop” on a pole over the shoulders. He could set up shop at any place.

Other dealers grilled the fish at home and sold only the pieces.

In Edo, eel was cut open from the backside, whereas in Osaka (Kamigata) and Kyoto it was sliced open from the stomach.
Many samurai lived in Edo and “harakiri,” cutting the stomach, was not favored.

after grilling the skewers are taken out and the pieces placed on a broad dish.

In Tokyo it is first simmered, then grilled.
In Osaka it is not simmered. 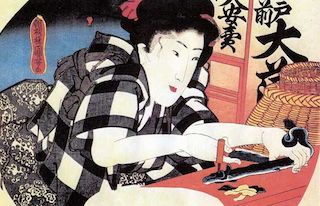 “Japan’s oppressive summer time heat and humidity can reach temperatures that hover at 30 Celsius (90 F), even in the evenings. That’s when the lethargic condition known as natsubaté sets in. The long-standing Japanese culinary cure for such listlessness is eating eel. Highly nutritious, eel is especially rich in vitamin B1 (that explains its ability to restore stamina sapped by summer heat) and vitamin A (touted for centuries as excellent medicine for those with night blindness). Eel is also high in EPA (that helps to lower “bad” blood cholesterol) and DHA (nicknamed “brain food,” its thought to enhance mental acumen).

Beating the heat by eating eel is an ancient Japanese practice; early mention can be found in the Manyoshu, an 8th century anthology of poetry though the current custom of consuming eel specifically on doyōushi no hi began during the Edo period. On the lunar calendar, “doyō” refers to the 18-day time period prior to a change of seasons. There is a doyō period before the onset of each season: spring, summer, autumn, and winter. Most Japanese, however, are familiar with the summertime (pre-autumn) one called 土用丑の日 doyō ushi no hi. Ushi(“cow” or “ox”) refers to one of 12 animal zodiac names, assigned by many Asian cultures to both years as well as days within each year. This year, 2017, has two days that qualify as doyō ushi no hi, July 25 and August 6. This year’s double doyō provides twice as many reasons for Japanese restaurants and grocery stores to run promotional specials on glaze-grilled unagi eel.

HOWEVER… since 2014, true unagi (Anguilla japonica) has been placed on the Red List of threatened species. Efforts are being made to remedy the situation but a combination of the difficulty of farming (not enough is yet known about the lifestyle of the freshwater fish to breed them successfully in captivity) and the sporadic nature of the commercial market for the product (a huge peak at mid-summer and nearly zero sales at other times of the year) makes it especially challenging.”

To find out more about current conservation initiatives and monitoring of the situation, I refer you to the International Union for Conservation of Nature’s webpage: http://www.iucnredlist.org/details/166184/0

So, you may consider the above from Elizabeth Andoh when deciding to eat Unagi at this time. 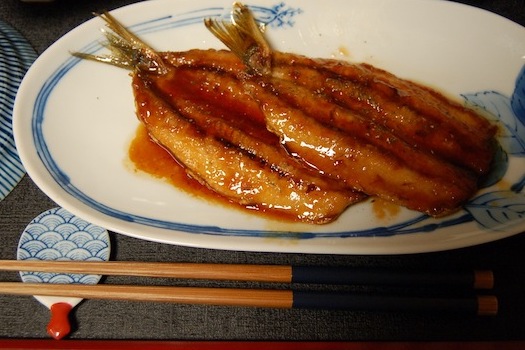 Sardines prepared in the manner of Soy-Glazed Eel

A single portion (about 85 grams/3 ounces) of sardines prepared like eel is packed with 696 mg DHA and 624 mg EPA and far fewer calories (227 calories per portion of sardine compared to eel’s 293). Eating hikarimono (literally “shining things”) such as mackerel and sardines is a nutritionally sound practice in general. A delicious, environmentally friendly way to restore vitality to your heat-weary body.

While unagi tends to be fairly expensive in Japan, Kane-yo is remarkably reasonable. It’s also got a wonderful atmosphere – a funky patina of age that calls to mind pre-war Japan.
http://www.kyogokukaneyo.co.jp/