“Not only is there no attempt to hide the damage, but the repair is literally illuminated… a kind of physical expression of the spirit of mushin….Mushin is often literally translated as “no mind,” but carries connotations of fully existing within the moment, of non-attachment, of equanimity amid changing conditions. …The vicissitudes of existence over time, to which all humans are susceptible, could not be clearer than in the breaks, the knocks, and the shattering to which ceramic ware too is subject. This poignancy or aesthetic of existence has been known in Japan as mono no aware, a compassionate sensitivity, or perhaps identification with, [things] outside oneself.”
–Christy Bartlett

Kintsugi (golden joinery) is the Japanese art of repairing broken pottery with lacquer dusted or mixed with powdered gold, silver, or platinum, a method similar to the maki-e technique. As a philosophy, it treats breakage and repair as part of the history of an object, rather than something to disguise. Lacquerware is a longstanding tradition in Japan, at some point it may have been combined with maki-e as a replacement for other ceramic repair techniques.

One theory is that kintsugi may have originated when Japanese shogun Ashikaga Yoshimasa sent a damaged Chinese tea bowl back to China for repairs in the late 15th century.When it was returned, repaired with ugly metal staples, it may have prompted Japanese craftsmen to look for a more aesthetic means of repair. Collectors became so enamored with the new art that some were accused of deliberately smashing valuable pottery so it could be repaired with the gold seams of kintsugi.

Kintsugi became closely associated with ceramic vessels used for chanoyu (Japanese tea ceremony). As a philosophy, kintsugi can be seen to have similarities to the Japanese philosophy of wabi-sabi, an embracing of the flawed or imperfect. Japanese aesthetics values marks of wear by the use of an object. This can be seen as a rationale for keeping an object around even after it has broken and as a justification of kintsugi itself, highlighting the cracks and repairs as simply an event in the life of an object rather than allowing its service to end at the time of its damage or breakage. Kintsugi can relate to the Japanese philosophy of “no mind” (mushin), which encompasses the concepts of non-attachment, acceptance of change and fate as aspects of human life.

Not only is there no attempt to hide the damage, but the repair is literally illuminated… a kind of physical expression of the spirit of mushin….Mushin is often literally translated as “no mind,” but carries connotations of fully existing within the moment, of non-attachment, of equanimity amid changing conditions. …The vicissitudes of existence over time, to which all humans are susceptible, could not be clearer than in the breaks, the knocks, and the shattering to which ceramic ware too is subject. This poignancy or aesthetic of existence has been known in Japan as mono no aware, a compassionate sensitivity, or perhaps identiﬁcation with, [things] outside oneself.

Beauty in the Art of Repair: Kintsugi by David Pike
By Kathryn Pombriant Manzella On December 12, 2014

The passion surrounding Japanese tea ceremony is well known to its practitioners, historians, and to art collectors. I was not surprised, then, when I learned that reverence for a tea bowl was at the root of a unique form of Japanese art restoration known as kintsugi. 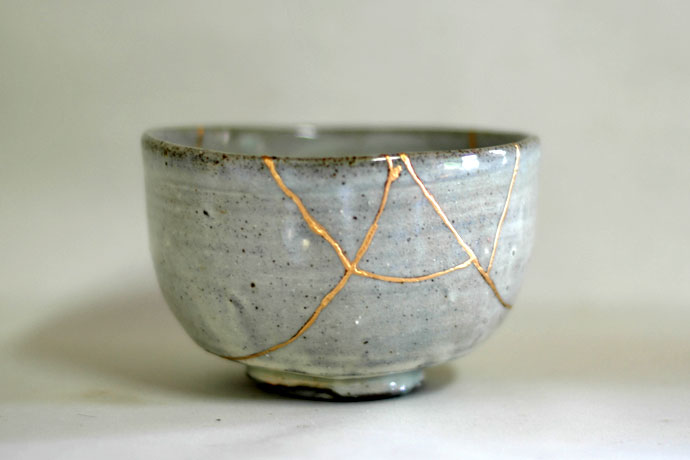 An example of kintsugi repair by David Pike. (Photo courtesy of David Pike)

The technique, also spelled kintugi, translates as “golden joinery” and is the fascinating Japanese craft of using lacquer and metal to rejoin and repair a broken ceramic item. It is also referred to as kintsukuroi or “golden repair.” The process differs from other artistic restoration techniques in that visibility–or invisibility–of repair is not a concern. In fact, kintsugi restorations are so obvious that they can be considered nothing less than celebrations of use. 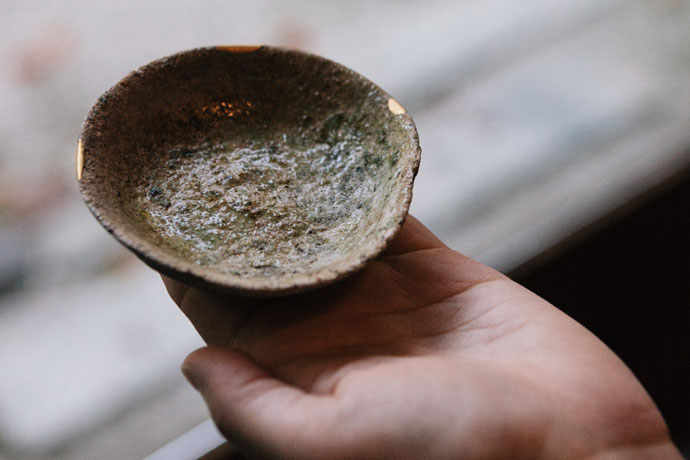 Kintsugi repairs are visible on the edges of this sake cup that is over 700 years old!
(Photo by Tomoko Matsubayashi)

Kintsugi, like the austere wabi-cha form of Japanese tea ceremony, arose in marked response to Chinese aesthetics; ceramics in that country were traditionally repaired with metal staples. Japanese historical sources suggest that a favorite tea bowl of the 8th Ashikaga Shogun, Ashikaga Yoshimasa (1436-1490), had been sent to China for repairs and was returned with metal staples that he found displeasing. It is reported that he ordered a substitute be found and kintsugi was born.

Japanese urushi lacquer is made from the sap of the urushi tree, and it has a long history of use in the country, dating to 2400 BC. The plant, Toxicodendron vernicifluum, is related to poison ivy, poison sumac, and poison oak, and like its relatives is a very strong irritant. It owes its toxicity to the sap’s primary chemical component, urushiol. Artisans and craftspeople who work with the medium gradually build up immunity to the chemical although most wisely don gloves and masks for the process. 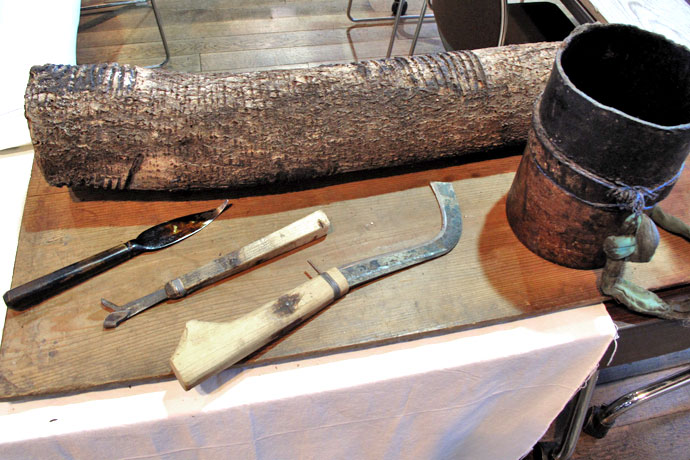 Urushi harvesting tools and a segment of an urushi tree in Iwate, Japan.

It should be noted that lacquer is the perfect adhesive for Japan’s humid environment because it dries or hardens by absorbing moisture from the air. Lacquer itself is a highly durable material which is very adhesive even newly applied. The addition of powdered metal to the liquid effectively dyes the lacquer and further increases durability and beauty.

David Pike, an American kintsugi expert living in Japan, claims that the theory of the “[kintsugi] process is deceptively simple: mix lacquer with a binding medium–rice or flour–and use it to stick the (ceramic) pieces back together. Then finish the break line with a metal highlight.” 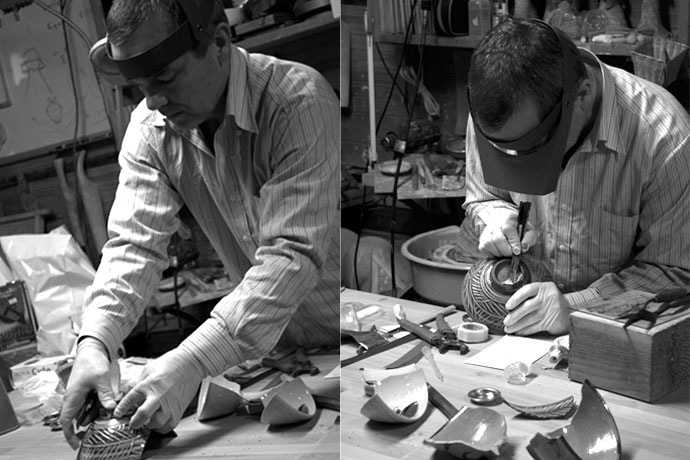 He indicates that the reality of the practice is much more difficult due to myriad problems that can arise in each step of the process. The online and in-person workshops that David hosts are attended by Japanese and non-Japanese alike and are designed to cover the materials, the process, and difficulties associated with it.

Kintsugi‘s requirements are simple: lacquer, a binding medium, a palette knife, a fine paintbrush, and powdered metal (usually gold.) David prefers to work with Japanese, rather than Chinese lacquer, because the former contains approximately 75% urushiol while the latter has 15%. The cost can can be prohibitive, though. So too with gold, his powdered metal of choice.

Pike’s interest in kintsugi stems from his study of Japanese antiques and he has since acquired an antiques-dealer license in his adopted country. He began attempting simple kintsugi repairs on his self-made pottery and now repairs the work of others in addition to his own. David claims that he enjoys every step of the process which would seem to be true given that he has performed kintsugi every day for the past five years! 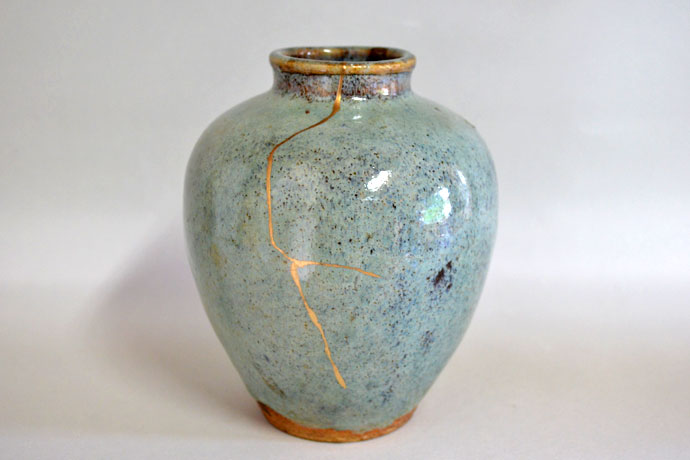 A point of pride for the artist is that he uses true lacquer exclusively while many kintsugi hobbyists and even books suggest repairs using an industrial polymer covered by a small bead of lacquer. David’s adherence to authentic technique and materials has won many fans. After all, a simple repair generally takes a month from start to finish while more complicated restoration works can require two.

David’s enthusiasm and passion for his work is infectious and I’m grateful for a new–yet old–perspective on Japanese ceramics; that kintsugi has its roots in tea ceramics is delightful to me. More importantly, the process reinforces the idea that perfection isn’t necessary for beauty and that  “making do” can be tremendously satisfying.