In 1864, many houses in Kyoto were destroyed by a fire caused by the Hamaguri Rebellion. The construction of the workplace-cum-dwelling townhouses known today as machiya began shortly afterward. The wooden architecture provides a special nostalgic atmosphere to the city’s landscape. Even today, the remnants that epitomize the way of living as practiced by the original inhabitants and their wisdom and innovative spirits abound. To help you understand the true charm of machiya architecture, we asked Professor Yoshifumi Muneta, a machiya expert and researcher advocating machiya restoration efforts, to answer four key questions.

What is the reason for the narrow front and deep rear of the machiya structure?
Like the old urban cities in Europe and Asia that served as commercial and industrial centers, Kyoto was populated with merchants and tradesmen who desired street-facing storefronts, and this resulted in plots shaped like thin strips. They are cousins to schieras, linear houses and shophouses. Kyoto natives mockingly call them “eel’s beds.” Many people mistakenly believe that the narrow frontage was a result of the tax assessment practice, which was based on the width of the property facing the street. In fact, the tax practice was enacted after these townhouses were built.
Even today, however, some neighborhood associations assess community activity charges scaled to the width of the frontage. The shape of the land had added design benefits, like allowing residents to build a workshop, storehouse or garden filled with trees and plants in the rear to suit their tastes.

What is it like to live in a machiya?
Most machiya houses today are equipped with modern amenities, including a full range of kitchen equipment.
However, the real character of machiya housing lies in traditional elements, like the ambience only mature wooden houses can emanate, and the tsuboniwa miniscule garden, which conveys changing seasons and the fresh smell of well-trimmed trees and plants. Even today, many residents alter interior elements of the house, such as sliding doors and fixtures, twice a year to match and supplement the summer and winter ambiance. Meticulous preparation is also required to set up the interior of machiya for monthly events and annual festivals like Gion Matsuri, but machiya owners also know that the joy of welcoming guests to their freshly decorated houses is immeasurable. Kyoto natives take exceptionally good care of their kimonos and other belongings because they are essential to a lifestyle firmly anchored on the traditional seasonal rituals and customs of the city.

What are the special features of the machiya structure?
Machiya townhouses exist across Japan and their characteristics are as varied as their locations. Kyomachiya, or machiya in Kyoto, are known for their lavish use of relatively elaborate and delicate materials and their light, supple construction. The building technique of placing columns on cornerstones is an ancient one commonly used for shrines and temples. Although not permitted under the current building standard act, this construction technique has been proven to offer superior seismic resistance according to recent studies, which confirm that the columns absorb the seismic power as the quake displaces them out of the cornerstones. Larger kyo-machiya houses are made up of multiple structures such as a front section, principal house, storehouse and an annex. The storehouse is made of clay and is extremely fire resistant. In the past, people used the storehouse to store their valuable kimono and obi.

Is it true that machiya houses are disappearing?
For the residents born before the war, occupying their family’s machiya house for their entire lives was the norm rather than an exception. However, many post-war generations have left their machiya for detached homes in suburbs and condominiums. A growing number of the younger generations who left machiya for suburbia don’t know what to do with a machiya once they inherit it from their parents. While they don’t want to give up a prime property in the inner city, they also don’t want to face the cost and effort of maintaining a machiya, which may already be in a frail state. The City of Kyoto advocates the preservation of machiya, but disappear from the map each year for the aforementioned reasons. On the other hand, a growing number of residents and shop proprietors are now interested in renting vacant machiya to give new life to them.

The charm of the kyo-machiya is now appreciated by the people of Kyoto. Their rediscovery of machiya was not so much a result of conscious efforts to conserve their history, culture and traditions so much as a consequence of their growing weariness of a monotonous and unexciting urban lifestyle.

It’s been almost 70 years since the end of the war, but contemporary architecture has failed to create a landscape that outshines the ambience rendered by machiya townhouses, both individually and collectively, as well as the streets surrounding them. The people who have lived in great historic urban centers around the world, like Paris and Florence, know how to appreciate the beauty of kyo-machiya, which are to them at least on an equal footing with the urban splendor of European cities, and they know how to enjoy life based on that appreciation. Machiya were first discovered by artists as attractive spaces to live and work. Young people with good taste followed suit.
The long-time residents of machiya are also re-discovering their beauty, which lies below the superficial surface. 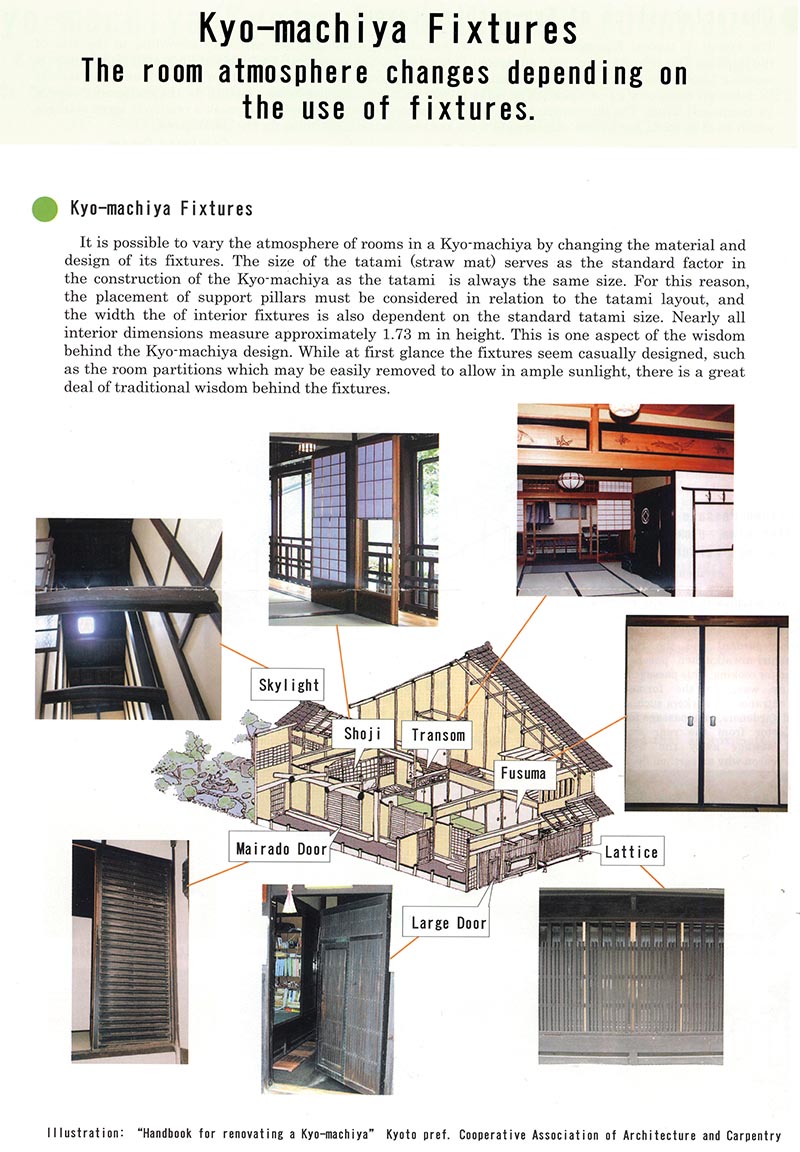