Adjacent to Nijo Castle, the Ogawa family has been living in this designated National Treasure for several hundred years, since the days when it functioned as an inn catering to feudal lords visiting Kyoto. 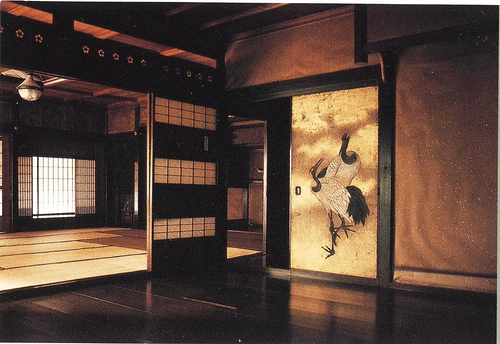 The 17,600 sq. ft., Sukiya-style house has 24 rooms. Because guests of Nijo Jinya were the wealthiest and most powerful people in feudal Japan, security was a high priority. The house is fitted with numerous devices to outsmart treacherous intruders. There are hiding places between cupboards, low ceilings in hallways to discourage swordplay, hallways that dogleg around blind staircases in order to trap an enemy, soundproof hiding places for a bodyguard, escape openings, a suspending staircase, closets with back doors, hiding places for valuables and documents and areas built with acoustic qualities that allowed guards to hear all conversation below.

The building was built between 1661-1673, more than 300 years ago. Historical documents say it originally served as a rice exchange until 1791 when it became a private house. “Manya-hyoemon” was the original owner’s name in retirement. “Manya” is used for other shops’ names, too. It is said that the Ichiriki teahouse in Kyoto used the “Manya” name, and they exerted a great influence in Gion.

A rice exchange would exchange rice for money at a time when samurai got their pay in rice and wheat. The rice and money exchange rate was set by the exchangers themselves, so they had absolute economical control over the samurai.

Manya-hyoemon worked not only as a merchant but also as a public affairs officer, what we today would call a lawyer. The Tokugawa government established kujikataosadamegaki for law preparation. This house was built in the government office quarter near Nijo Castle.

The house was renovated from a rice exchange to a private house because of a fire, so it has defensive features as part of its architecture as a safety measure. The house is private property now. It was designated as an important cultural property in 1950. And Nijo-Jinya was opened to the public by its owner.

Tour of the House

This hall is a traditional Japanese formal reception room used by the owner of the house. One of the walls serves as a tokonoma, which is a recessed alcove where scrolls and ceramics are displayed. In this hall’s ceiling, there is secret watch room called “mushakagakure.” It is used as a skylight in this hall, but on the blind side that is opposite from where visitors would sit is a secret passage leading from the room.

Noh is a type of classical Japanese drama employing highly stylized dance and is accompanied by flute, two or three drums, and dramatic chants. So, this room has excellent acoustics. Actors and musicians performed noh on special occasions in this room, but usually the owners used it for a living room in the past.

This room is used to praise an ancestor of the house owner and also serves as a waiting room for the Kainyoan tearoom. The cloud-capped peak of Mt. Mikasa and Todai-ji Temple, both near the Kasuga Shrine in Nara, are depicted on the wall.

Kainyoan is a tea ceremony room. The wall is painted with iron powder, so this room’s atmosphere is rustic. There is an unusual round hearth. That’s because this room is also used for business talks. The round hearth was designed to lead to smooth business negotiations.

There was a beautiful stream that flowed beside the house near the tea ceremony room. The ceiling is like a roofed pleasure boat, and visitors could feel as though they were on board a boat and enjoy the tea ceremony.

Defensive architecture is a special feature of Nijo-Jinya and enables visitors to escape or to hide if the need arises.

Mushagakure is secret watch room built in a big hall’s ceiling. It cannot be seen from where visitors would usually sit.

Secret staircase in the ceiling

Visitors cannot easily find their way to the second floor. This hidden staircase looks like a shelf for tea utensils because it is located near Kainyoan, the room reserved for tea ceremony.

This staircase is hidden in a closet behind Japanese sliding doors, and visitors can’t find this staircase easily. Saruhashigo is an emergency exit. The name Saruhashigo means “monkey’s ladder,” and suggests the way that ninja would come down the stairs, like monkeys.

Nijo-Jinya is a private house owned by the Ogawa family. It was designated as a public cultural asset among Japanese private houses in 1944. Reservations are necessary to view it, because it’s private property. One-hour tours are conducted by a family member or by a specialized guide in Japanese only. So foreign visitors must arrange for their own interpreter.

To arrange for a guide: http://nijyojinya.net/English.html

You can go to Nijo-Jinya by Kyoto city bus, subway, or taxi. It is about an eight-minute walk from the Higashi Otemon gate of Nijo Castle.