Kado – The Way of Flower Arranging

While flower arrangement for many people in the West consists of symmetrically arranging flowering plants in a vase, Japanese Ikebana (literally ‘flowers kept alive’) is a lot more complex. There are many schools, of which the most popular are Ikenobo, Sogetsu and Ohara. There are also different styles depending on the school and the plants and vase used. 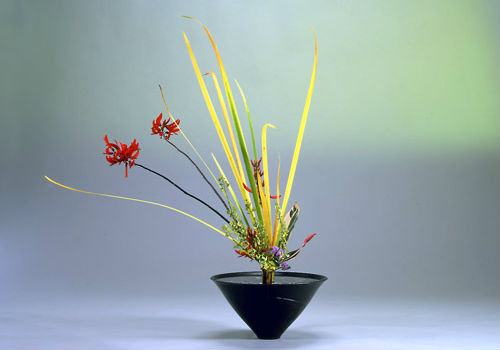 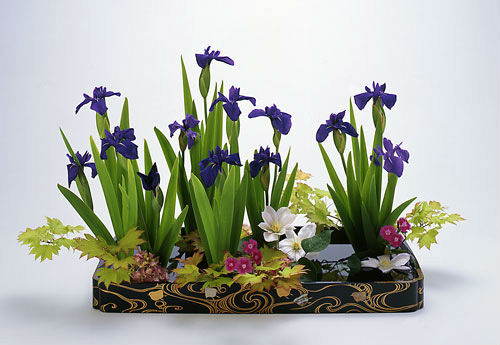 Ikenobo is the oldest school of ikebana, founded by Buddhist priest Ikenobo Senkei in the 15th century. He is thought to have created the rikka (standing flowers) style. This style was developed as a Buddhist expression of the beauty of nature, with seven branches representing hills, waterfalls, valleys and so on arranged in a formalized way. The present 45th-generation head of the school is Ikenobo Sen’ei. The school is based in the Rokkakudo temple in Kyoto, believed to have been started by Prince Shotoku. Among the priests and aristocrats, this style became more and more formalized until, in the late 17th century, the growing merchant class developed a simpler style, called seika or shoka. Shoka uses only three main branches, known as ten (heaven), chi (earth) and jin (man) and is designed to show the beauty of the plant itself. Another old form of ikebana is nageire, used in the tea ceremony.

The first of the modern schools was formed when Ohara Unshin broke from the Ikenobo school in the late 19th century. The Ohara school generally uses moribana (piled-up flowers) in a shallow, flat container. The school was started at a time when Western culture was heavily influential in Japan and the moribana style made good use of Western plants. But it was still a formal style. Influence from the artistic movements of the early 20th century led to the development of jiyuka (free-style) arrangement. Despite all the changes, ikebana was still only for the upper class.

In the 1930’s and then more so in the postwar period, interest in ikebana became much more widespread. Ikebana schools opened which attracted people of all social classes. During the occupation, many wives of US servicemen took up the art and later helped it spread abroad. Led by Teshigahara Sofu, founder in 1927 of the Sogetsu school, zen-eibana or avant-garde ikebana introduced all kinds of new materials, such as plastic, plaster and steel.

Today, there are about 3,000 ikebana schools in Japan and thousands more around the world. The Ikenobo school alone has some 60,000 teachers worldwide. Ikebana is practised by about 15 million people in Japan, mostly young women.

Ikebana can be roughly divided into two styles – the moribana shallow vase style and the nageire tall vase style. The Sogetsu school uses a series of kakei (patterns) for each style so that even the beginner can quickly create their own arrangements. As an example, let’s look at the moribana Basic Upright style. 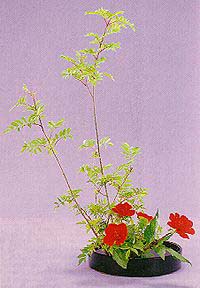 Kakeizu for the arrangement shown on the left
The photo shows the frontal view as in the illustration.

The shushi are the three main branches – the shin (truth) branch, the soe (supporting) branch and the hikae (moderating) branch. The arrangement of these branches and the kenzan or spiked metal holder are drawn in a simple diagram, called a kakeizu. The kakeizu shows a frontal and overhead view of the arrangement. After examining the kakeizu, suitable branches or flowers are chosen for the shushi and trimmed if necessary. The stems are cut to correct lengths according to set formula. The kenzan is placed in the vase and just covered with water. The sushi are fixed to the kenzan in order and according to the kakeizu. Jushi or short supplementary stems are added to support the shushi and give depth to the arrangement. Finally, the composition is examined and any finishing touches applied.

I had the pleasure of having a lesson with Sensei Masui Ryotoku who is the 33rd monk of a Nichiren temple in Kyoto. The temple itself has been in existence for over 580 years. She is a student of  the Shogetsu school of flower arranging. She lives at the temple with her mother who was 87 years old at the time and a master calligrapher. I am very grateful for the time spent with them.