Exhausted, I sought
a country inn, and found
wisteria in bloom
–Bashō 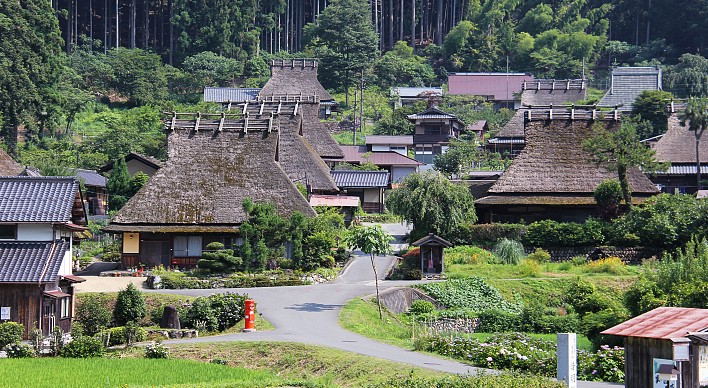 This remote, rural area in the mountains is 30 kilometers north of central Kyoto. The area is famous for its traditional, thatched roof (kayabuki) farmhouses of which over 200 can be seen dotting the countryside. Unlike those found in many other historic towns and districts around the country, the majority of Miyama’s old houses survive as residential dwellings where people still live and work. This in turn lends a very nostalgic atmosphere to the area, and gives visitors a chance to experience the traditional, authentic feel of rural Japan.

Miyama is made up of multiple small villages and hamlets scattered along its narrow, winding valleys. The main attraction among them is the northern village or Kayabuki no Sato, which features nearly 40 farmhouses with thatched roofs and has a higher percentage of thatched roof houses than any other place in Japan. Visitors can stroll around the village, but here too, most houses are private homes that cannot be entered.

One of the buildings open to the public is the Kayabuki no Sato Folk Museum. The former residence exhibits traditional tools and daily household items from past decades, as well as a few displays about the construction and maintenance of the thatched roofs. Not far from the folk museum stands the Little Indigo Museum, another thatched roof building which has been converted into an indigo dyeing studio and gallery. Apart from these two museums, the only tourist facilities in the village are three minshiku and a cafe. Furthermore, there are a few souvenir shops at the tourist parking lot across the street from the village. 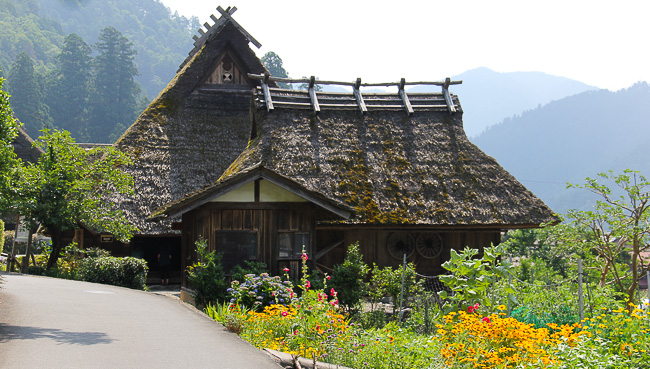 One of the best ways to appreciate Miyama’s thatched roof houses is to overnight in one of them. Three of the farmhouses in Kayabuki no Sato, along with several more in other villages of Miyama, also serve as lodgings. An overnight stay affords visitors a more intimate look at the houses as well as the chance to experience a traditional Japanese style home as many still feature tatami floors, futon beds and open hearths (irori).

The old wooden homes convey a pleasant, rustic atmosphere, yet at the same time they are typically equipped with simple, modern amenities. Baths and toilets are also usually modern but shared among the staying guests. An overnight stay typically starts from around 5000-8500 yen per person, depending on meals which usually feature local dishes such as sweetfish (ayu) caught locally in the Yura River.

In addition to the houses in Kayabuki no Sato, a further 150 or so thatched roof farmhouses can be found scattered across Miyama. Two of these houses are the Miyama Kayabuki Gallery and Folk Museum, a 15 minute walk from the Izumi bus stop (Samotobashi bus stop is even closer). While the folk museum exhibits a large collection of traditional tools and artifacts from Miyama’s past, the art gallery stages rotating exhibitions by various artists. One ticket covers admission to both.

Miyama is also known for its wealth of outdoor activities, including sweetfish fishing and hiking along the Yura River. A walking trail leads along the river for about two kilometers from the Kayabuki no Sato to the Shizen Bunkamura Kajikaso, a nature center and accommodation.

For more serious hiking, check out the Ashiu Forest that covers the mountainous eastern border of Miyama and is the source of the Yura River. This magnificent old-growth forest is populated by deer, bears and monkeys, and boasts the largest number of plant varieties in Japan. The forest is managed by Kyoto University as a research area and requires a permit to enter. Permits can be obtained from the research station at the entrance gate. While it is possible to visit on your own, it is easiest to access and explore Ashiu Forest by joining guided tours. Reservations can be made at Shizen Bunkamura Kajikaso.

Although Miyama is only located about 30 kilometers north of central Kyoto, it is rather complicated and time consuming to access. It is most easily visited as a side trip from Kyoto or along the way between Kyoto and Amanohashidate or Kinosaki Onsen:

How to travel between Miyama and Kyoto

By train and bus via Hiyoshi Station

Take a local or rapid train along the JR Sagano Line (Sanin Line) from to Hiyoshi Station (about 45 minutes, 760 yen, fully covered by the Rail Pass). Most trains require a transfer at Sonobe along the way. From Hiyoshi take a Nantan Bus into Miyama (50 minutes, 610 yen one way to Kita). A few buses depart from Sonobe Station instead of Hiyoshi Station.

By bus via Takao through the mountains

From Kyoto Station, take the JR bus in direction of Takao and get off at Shuzan (90 minutes, 1180 yen, fully covered by the Japan Rail Pass), the terminal stop on the line (note that not all buses operate all the way to Shuzan). From there, Nantan Buses operate into Miyama (30 minutes, 460 yen one way to Miyawaki where a transfer to the Miyama Sonobe Line is possible).

Due to poor public transportation in Miyama, rental cars are a convenient alternative for accessing and exploring the area. Many rental outlets can be found in Kyoto; however, to avoid the often unpleasant traffic in central Kyoto you may want to consider renting from an outlet north of the city center or from Kameoka. There are two main routes to reach Miyama from Kyoto:

Above fees and schedules are subject to change.

How to get around Miyama

Miyama is covered by a fairly comprehensive bus network; however, buses tend to be infrequent and traveling across town sometime requires a transfer along the way, usually at Miyawaki where the transfers are often reasonably well timed. Bus fares depend on the distance traveled. Alternatively, a 1-day bus pass for 1540 yen provides unlimited rides on Nantan buses on one calendar day (not including the JR Bus).

Miyama is also well suited to be explored by rental bicycle. Bicycles can be rented in Kayabuki no Sato (from the souvenir shop next to the parking lot), from the Shizen Bunkamura Kajikaso and from some of the local accommodations. They typically cost around 1000 yen per day. Rentals made from Kayabuki no Sato or Shizen Bunkamura Kajikaso can be ridden one way downhill to be returned at the Miyama Visitor Center at Agake.

The easiest way to get around Miyama is by rental car. There are no rental outlets near Miyama itself, but plenty of them around central Kyoto, Kameoka, Fukuchiyama and Maizuru.

Thursdays and Fridays (except national holidays), December 1 to March 19

Mondays (or the following day if Monday is a national holiday), December to March

500 yen (includes entry to both buildings)