A Variety of Sensu

Kyoto uchiwa fans were derived from flat Korean fans introduced during the Northern and Southern Courts Period (14th century), and are characterized by arraying the fine ribs one by one in a radiating pattern, applying the cover paper, and then attaching a handle. Also known as gosho uchiwa from their use in the Imperial court, some Kyoto uchiwa are made from high quality bamboo from Sagano with elegantly crafted handles of lacquer and gold. The pictures decorating the fans are themselves a unique art form, and many Kyoto uchiwa are appreciated as art.

A sensu is used in many ways. Some are used in dance, some purely for decoration, and so on.  All in all, there are about ten kinds of sensu and the number of ribs or slats is different in each one.

Hi-ougi are used in ceremonies and for decoration. This is the oldest style of fan. They are made from thin slats of hinoki, or Japanese cypress. Gold foil is applied to the front of this fan. At first only men used such a fan, but later women came to use it too.

Kawahori-sen are a paper type fan. The first kawahori-sen were made in the Heian era.

Cha-sen are used in the tea ceremony.  There are two sizes of this fan, according to the gender of the user. Those for men measure about 7 inches, and those for women about 6 inches

Mai-ougi are the fans used in Nihon buyo, or Japanese dance. These are a very common type of fan. However, they also show certain differences between those used by men and women, for example, in color, design, and size.

Since its foundation in 1823, Miyawaki Baisen-an has been preserving the tradition of Japanese folding fans.  They were counted as one of the three most important shops that manufactured essential items for traditional Japanese attire along with coronets and the long headgear worn by imperial nobles.  All of the Japanese fans from Miyawaki Baisen-an have an original design and almost all are hand-painted.  They produce new designs annually; some derive from classical Japanese motifs while contemporary artists design others.  Not only the design but also their functionality is excellent: smooth opening/closing, texture, and weight… every element is thoroughly considered.  Exhibiting beauty and functionality, their folding fans are highly recognized and are delivered to the imperial family.

In the viewing room, be sure to look up, as the ceiling is filled with painted images of different fans. 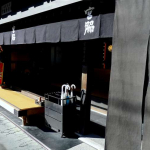 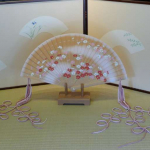 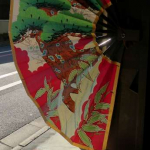 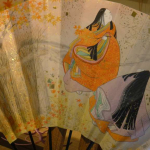 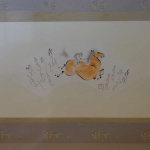 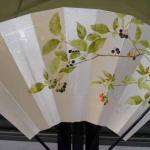 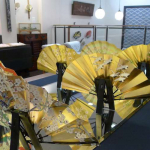 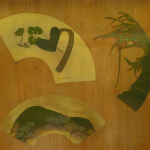 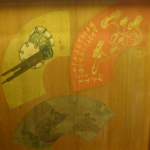 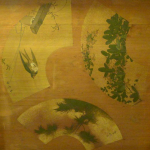 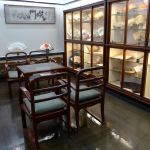 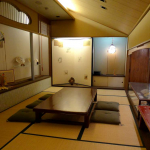 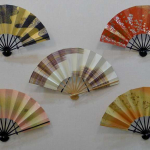 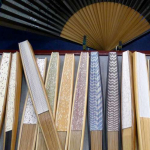 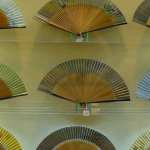 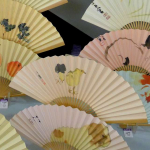 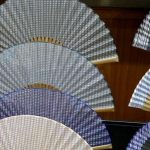 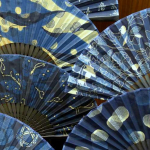 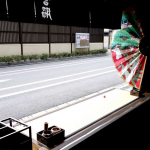 Hangesho which has long offered a wide range of traditional Kyoto style folding fans. The present shop utilizes an old machiya townhouse that used to be an ochaya (work and living place for maiko and geiko).

The first floor is full of colorful folding fans while on the second is a room for experiencing a traditional folding fan game and actual fan making. Be sure to look up, as the ceiling is filled with painted images of different fans.

Hangesho’s fans are recognized for their balanced form and elegance. They offer not only traditional motifs but also contemporary designs as well. Some of the popular designs are by a young Japanese actor, Arata Iura, displaying the crescent moon or bats.

A folding fan is a very practical and essential item for surviving the severely hot summer in Kyoto.

Folding fans were born in Japan, most likely in Kyoto, and travelled from there to China and Europe. Although first made around the 9th century in the early Heian Period, the techniques used today were developed around the 16th century.

Folding fans made in Kyoto (kyo-sensu), decorated with beautiful pictures, were a status symbol in the Imperial Court. Sensu were an important daily article for Imperial family members and court nobles and eventually came to play a principal role in traditional theatre entertainment such as noh and kyogen as well as in the tea ceremony. It is said that the fans used in medieval France were derived from Kyoto’s folding fans brought from Japan. They were carried by both men and women and used according to a strict code of decorum.

Kyo-sensu were written upon and often decorated with short poems brushed in ink. People recorded many things on paper, but paper was very valuable, so fans were special objects. The oldest kyo-sensu was found in the arms of the Senju Kannon (Thousand Armed Avalokiteshwara) in Touji Temple in Kyoto in 877.

Kyoto folding fans are crafted with the shape and materials selected according to the application. They are broadly classified as ita-ogi, made from linked wooden ribs, and hariogi, made from paper or silk glued to bamboo or other ribs.