As the imperial capital and center of court life for over 1000 years, Kyoto has naturally played a central role in the development of Japanese culture. The modern city continues to take pride in its cultural heritage, offering an interesting set of museums devoted to history, arts, crafts and more. A selection of some of the city’s most prominent museums is listed below.

Visitors planning to see multiple museums should consider the Kansai Grutto Pass. For 1000 yen, the pass provides entrance or discounted entrance to more than 50 museums and galleries in the Kansai Region. It is available annually from April through February of the following year and is valid for one entry to each participating museum. The pass expires three months from its first use or on March 31, whichever occurs first. A 6-month version is available for 1800 yen, but also expires on March 31 at the latest. The pass can be purchased at participating museums.

Kyoto National Museum
Across from Sanjusangendo Temple. One of four national museums across the country, the Kyoto National Museum  focuses on traditional Japanese art. It features both, exhibitions from its permanent collection and various temporary special exhibitions. Special exhibitions are shown in the museum’s brick building from the Meiji Period, while the permanent collection is housed in a modern building newly opened in 2014.

This museum offers a very attractive permanent exhibition about the history of Kyoto, although its floor space is relatively small, and information in English is limited, making it difficult to fully appreciate without Japanese reading skills. In addition, special exhibitions are held periodically.

Raku Museum
About 15 min from Imadegawa Station
Hours:
10:00 to 16:30 (entry until 16:00)
Closed:
Mondays and between exhibitions
Admission:
Varies depending on exhibition, typically between 700 – 1000 yen

The Raku Museum features pottery created using Raku family techniques and traditions. Many of the ceramic works are related to the tea ceremony, especially tea bowls, but also vases and water vessels. The family put down roots in the location of the museum in the Momoyama Period and was favored by tea master Sen no Rikyu.

Nishijin Textile Center, named after the city district and local kimono weaving technique, offers interesting displays on kimono, and a kimono show is held several times a day. Last but not least, there is a large shopping section.

Museum of Modern Art, Kyoto
Near Heian Shrine
Hours:
9:30 to 17:00 (entry until 16:30)
Closed:
Mondays (or following day if Monday is a national holiday), New Year
Admission:
430 yen (does not include special exhibition fee, which varies)

Often referred to by its initials, MOMAK, the Museum of Modern Art, Kyoto changes the works on display from its permanent collection every couple of months. There are also special exhibitions organized in conjunction with other museums or groups. The museum building itself is a modern construction that was completed in 1986.

Kyoto Municipal Museum of Art
Near Heian Shrine
Hours:
9:00 to 17:00 (entry until 16:30)
Closed:
Mondays (or following day if Monday is a nationa holiday), New Year
Admission:
Varies according to exhibition (some are free of charge)

Located across from MOMAK near Heian Shrine, the Kyoto Municipal Museum of Art was opened in the 1930s to celebrate the enthronement of the new emperor. The large brick building has a lot of floor space and shows a wide variety of exhibitions, from major works from the museum’s collection to winning entries in local competitions.

This is one of Japan’s three great railway museums alongside JR East’s Railway Museum in Saitama and JR Central’s SCMAGLEV and Railway Park in Nagoya. It covers the history of railways from steam locomotives to the shinkansen.

Lake Biwa Canal Museum
500 meters east of the museums in front of Heian Shrine
Hours:
9:00 to 17:00 (until 16:30 from December to February)
Admission ends 30 minutes before closing
Closed:
Mondays (or following day if Monday is a holiday), Dec 28 to Jan 3
Admission:
Free of charge

This interesting museum is dedicated to the construction of the seven kilometer long Lake Biwa Canal, which runs between Kyoto and Biwa Lake to the east. The canal was a massive project and was completed in the late 1800s. The museum displays maps, models and tools.

Gekkeikan is one of the largest sake companies in Japan. The Gekkeikan Okura Sake Museum was established in Fushimi, the same area as the company’s original brewery, and displays traditional tools and methods of sake brewing. There is a free sake tasting at the end of a visit to the museum.

The Eigamura is part of the Toei film studios in Kyoto. It also serves as a theme park, where visitors can see first hand the sets that are used to film popular movies and TV dramas set in the Edo  Period (1603-1867).

The Kyoto International Manga Museum serves as both a facility for manga research and an exhibition space. The museum has a massive collection of manga that can be browsed by guests, and there are also special exhibitions on themes related to international manga.

Other Resources and Recommended Museums:

The tearoom “Shounken,” named by Urasenke tea ceremony master Hounsai Sen Genshitsu is located on the 1st floor. Visitors can enjoy fresh Kyoto-style sweets and flavorful green tea sitting. The ryureishiki style in which participants sit in chairs is used, so visitors can enjoy the experience without worry. There is a spot garden by the tearoom, where visitors can relax and forget time in a “Wa” space and a tranquil environment of that includes plum trees given by Kinkakuji Temple and a water harp cave, while listening to the clear melody of the water.

Closing day Monday (When Monday is a holiday, it is open and the next day it closes.)
Business days and hours From 10:00 to 17:00
Fares
Entrance fee: Free
Fee for the tea room ¥700
A group of 10 or more needs a reservation. Enquiries 075-432-3101
http://furutaoribe-museum.com/museum.html http://www.pref.kyoto.jp/visitkyoto/en/theme/sites/museums/national/

Kyoto Ii Museum is the only antique museum which specializes in Japanese armor and swords in Japan. Our missions are to study historical values of these antiques and old documents to investigate historical materials of Ii clan. 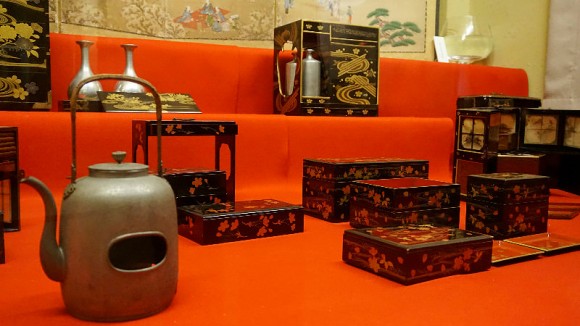 Established in 1689, Hanbey Fu is a long-running store specializing in fu, traditional Japanese food made out of wheat gluten.

This little gem hides on the second floor of this famous “fu” shop, one minute on foot from Kiyomizu-Gojo station. No one knows about it, and apparently no one cares either. Which is a good thing.

Bento means lunch box in Japanese. It’s what mothers prepare in the morning for their kids’ lunch. And their husbands lunch too (if he had the decency to come back home after the pachinko…). It’s also what you will find in convenience stores and train stations. And it can be a lot worse than that too. At the other end of the spectrum, you have those rather expensive lunch box served in kaiseki restaurants such as Kitcho. At 8000円 per person it’s certainly not on what the salariman is used to. But bento’s are actually much older than disposable chopsticks. Originally, they were more like picnic sets, complete with integrated sake (or soup) bottles, cup, trays, etc… Everything you would expect from your classic 1800’s paintings, but 100% Japanese style. Don’t really see what I’m talking about? Well, look at the few pictures over here, then have a little train ride to Kiyomizu-Gojo and ask for the bento museum. You don’t need to buy anything in the shop, although it’s polite and worth it. So no excuses!

The museum floor consists of several rooms with nice displays of luxurious bento’s, some of them clearly not meant to be transported, maybe just to give this romantic picnic feel to a high-class dinner, just like at Kitcho. Lacquerware is omnipresent and ingenious designs can be frankly stunning, as is the attention to details. The displays also feature old (and for some salacious) books. 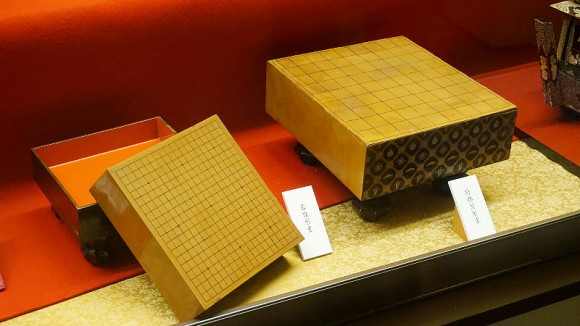 Bento Boxes that You Would Never Imagine Existed Bento, especially back then, was not only for individual meal. People mainly enjoyed each other’s company surrounded by nature. This recreational activity was to enjoy time filled with entertainment, hence bento boxes that can be converted into a board game was made! Excellent idea for a day out with a group of people, just imaging what kind of people must have used it is exciting.

There are about 150 bento boxes showcased in the museum. You will discover many unique bento boxes like the one that looks like cast-iron but are actually made out of wood. Boxes were carefully stored because many of them have designs with seasonal flowers to be enjoyed for a particular season then kept to be used for the following year and so forth. You will see many compartments in some of the boxes. Many of them have a place to hold sake as well.

The first floor sells variety of fu products that is popular among locals and visitors. Hanbey fu is a famous store with a long history which started from the founder, Hanbey, who was a chef for the Japanese imperial family. Fu products are commonly eaten by monks because of their strict meat-free diet. There are savory and sweet ways to eat fu. For example, these savory fu products named “Zen” are very tasty; some people eat it in place of meat. The Bento Box Museum is located on the second floor. Feel free to just walk up the stairs.
Bento Box Museum – Hanbey Fu main store
Phone +81 75-525-0008
Address 433, Shonincho, Higashiyama-ku Kyoto-shi, Kyoto, 605-0903
Directions 1-minute walk from Keihan Line Kiyomizu-Gojo Stn.
Hours 9am – 5pm
Reservations Not accepted
Closed New Year holidays
Fee Free: Credit cards Free admission. Credit card accepted for 1st floor shop. Friendly for Overseas Visitors Information in other languages are not available Information Japanese Languages spoken URL http://www.hanbey.co.jp/store/index.htm

Much more to see at www.thegiftsproject.com