dancing butterflies––
my journey forgotten
for a while
–Issa

What do you do when you live in a country with limited space but want to exercise your green fingers or express your love, and even your spiritual reverence, for nature? Well, you can always do things in miniature – ikebana and bonsai are your two main options.

Though the word ‘ikebana’ literally means ‘living flowers’, it is actually the visual presentation of cut stems, flowers and other features to represent an aspect of nature in miniature. Bonsai, on the other hand, means ‘pot plant’ and the art form involves raising living trees, often over a period of several years.

While they are small, bonsai are not actually different from the trees we see around us, they are not miniature species. Rather they are small branches of a tree, carefully chosen, pruned and cultivated so that they look like smaller versions of their own species. They are also displayed in a way that shows off their best features, usually in a simple, shallow pot. Bonsai is about the combination of the plant and the pot.

There are many different styles of bonsai such as: broom style – a tapered trunk topped by a symmetrical area of foliage; cascading style – the pot is kept on a platform and the branches ‘cascade’ down below it; windswept style – resembles a tree that has grown up in an area exposed to strong winds. Saikei is similar to and often confused with bonsai, but is actually closer to ikebana. Different species of small trees as well as other plants, rocks and sand are used to create miniature landscapes. 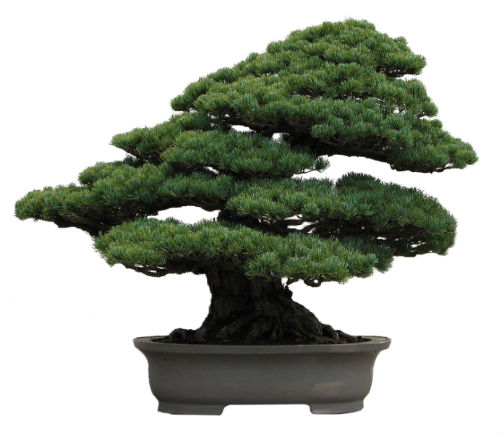 Gardening in many forms has been enjoying something of a boom in Japan in recent years and those with limited space have been rediscovering the charms and challenges of this part of their native culture. Bonsai are real trees in miniature and are not usually suitable as houseplants (some species have been developed for indoors). Usually they are hardy and can handle most weather. In fact, their growth may be adversely affected by artificial (ie. indoor) light and heat conditions, depending on your climate and the origin of the tree species. Even a small city apartment balcony can be big enough to build up a collection, something of an oasis for many urban dwellers. The smallest of bonsai, called mame (bean) can be just a couple of inches tall and a collection may also have trees a couple of feet high. The most popular are about 6 inches to a foot.

What makes a bonsai?

A bonsai may be developed from any woody plant (tree or shrub), however you should bear in mind that: