The geiko communities have built up a distinct style of music and dance over many years, and the geiko are required to adhere to the prescribed forms absolutely – there’s very little room for the performers to introduce their own innovations. The highly stylized and tightly choreographed dance moves are slow and graceful, so there’s no chance that speed of movement can hide any mistakes – every move must be (and almost always is) perfect. Participating in the dances is considered a great honor, so despite it being punishingly hard work, there is fierce competition amongst the geiko and maiko for the most prominent roles. (Maiko learn early-on in their careers just how demanding their chosen occupation is, so all the girls who make it through training must surely have an abundance of stamina and determination.)

Each performance has about eight scenes, each of which depicts some aspect of Japanese life, especially life in Kyoto and the geiko districts. There is a particular focus on traditional places such as shrines and temples, and on the changes seen in nature throughout the year. The performances aren’t restricted only to dance – the geiko also sing and act out mini-dramas. A huge amount of work goes into producing lavish costumes, and the geiko and maiko are elaborately made-up with white-painted faces and ornate hairstyles. Throughout the performance, around 60 geiko and maiko take to the stage, each wearing exquisite kimono decorated according to the theme of their act. They are accompanied by an orchestra playing traditional Japanese instruments. At the end of the show, all the performers return to the stage for a magnificent finale. 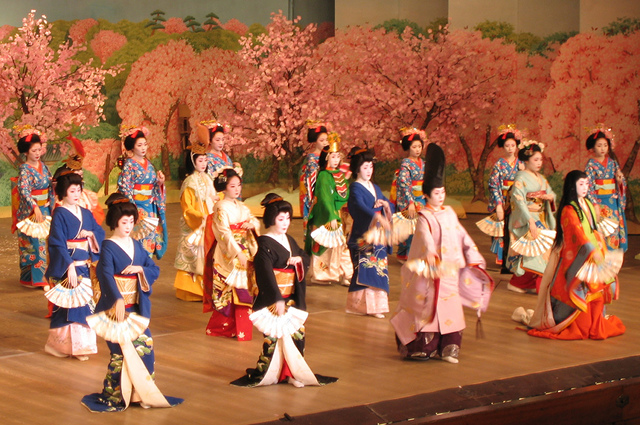 You have an option of either a first or a second class ticket, costing either ¥4,000 or ¥2,000. First-class ticket holders are assigned seats on one of the first two levels, or space on a tatami mat in the wings. Second-class ticket holders get to sit on tatami mats on the third level. Tickets generally sell out quickly, but a few second-class tickets are reserved for sale on the day of the performance – so if you’re prepared to get up early and stand in line, you’ll be able to get in even if you haven’t booked in advance. The theatre is not particularly big, so wherever you sit, you won’t be too far from the performers, resulting in a good viewing experience for everyone.

For ¥500 on top of the price of a first-class ticket, you can buy a ‘special ticket’ that gives you access to some extras. Firstly, you get to explore the theater’s Japanese garden before the show, and admire a small exhibition of kimono. It’s well worth taking a good look at the kimono, as it’s a rare chance to see the intricate embroidery of formal kimono close-up, and the kimono worn by Gion Kobu’s geiko are some of the most elaborate (and expensive) ever made. Each is a unique work of art, skillfully hand-made, often by designers and craftspeople based elsewhere in Kyoto.

After this, you get to enjoy the main benefit of the special tickets: taking part in a tea ceremony. A geiko sits on a platform at the front of the room and prepares powdered green tea, assisted by a maiko. Every motion is carefully controlled so that the whole process is performed with grace – geiko spend long-hours practicing so that they can make tea according to a strictly defined procedure that aims to make the whole process as aesthetically pleasing as possible. One lucky person is then given the tea prepared by the geiko, while everyone else is served with tea brought in by kimono-clad attendants. You also get a manju – a sweet containing red bean paste, which is served on a hand-painted ceramic dish that you get to keep as a souvenir. You won’t have long to drink up before it’s time to move on to the main auditorium ready for the performance to begin, but it’s well worth paying a little extra just to get this additional glimpse into the geiko world. 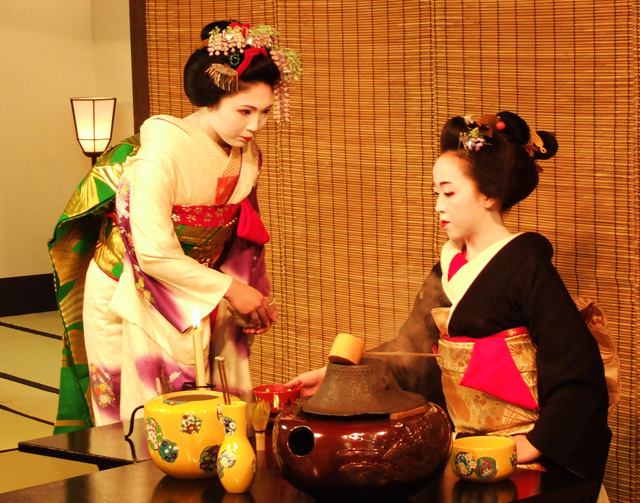 You can book by phone or fax, but credit cards are not accepted, so in practice most visitors find it easier to book through the hotel where they are staying. The theater is about ten or fifteen minutes walk from Gion-Shijo Station on the Keihan Line, or Kawaramachi Station on the Hankyu Kyoto Line, and there are many local bus services.

If you’re not able to make it to Kyoto in April, or you just want to see something slightly different, similar performances are held by Kyoto’s other geiko communities, each of which has its own unique style. The Pontocho geiko community has also been putting on annual public performances since 1872. Their performances, the Kamogawa Odori, or Kamo River Dances, are held in May at the Pontocho Kaburenjo theatre. They are famous for the extensive use of hand fans in their dances. In November, the Gion Higashi community, which is known for the originality of its choreography, puts on the Gion Odori at the Gion Kaikan theatre. Finally, two other geiko communities put on their dances in parallel with the Miyako Odori. The Miyagawacho community perform the Kyo Odori dances in the first two weeks of April at the Miyagawacho Kaburenjo theatre, and the Kamishichiken community perform the Kitano Odori dances at the Kamishichiken Kaburenjo Theater towards the end of April.

The spring dance of Miyagawacho is called the “Kyo Odori” (Kyoto Dance). The first performance was held in 1950 and enjoyed great popularity since then. After the fifth performance the stage was moved temporarily, but in 1969 the new Miyagawa-cho Kaburen-jo Theater was completed and the dance returned to its original location.
The dance is performed only in the first two weeks of April. Tickets are quite easily obtained from the ticket office in front of the theatre. If you get there early in the morning to buy the tickets, you have more choice where to sit. The performance shows famous places and stories of Kyoto as a background. Traditional music will be played live on stage by the musicians. Not only dance, but some theatre, or musical-like performance, will be shown as well. Even some of the performers will dress up as men to play the roles necessary for the story. Which is a comical and strange sight knowing a very elegant and sophisticated girl is underneath the ‘pomp’ and ‘swagger’ the role of men ask for. The best part of the show is the end dance where every performer comes on stage and they dance all together in their colorful kimono using fans to emphasize their elegant movements.

Ponto-cho Hanamachi
The dance is called Kamogawa Odori (Kamo River Dance) and started in 1872 as part of the Kyoto Exposition. It has been performed annually since and provides a show with a wide range of fans. This is the last spring dance event, from May 1st -24th. So there is still a week to attend it this year!

Gion Kobu
The First performance, called Miyako Odori (Dance of the Capital), was held in 1872 to  the Exhibition for the Promotion of Domestic Industry. Kyoto struggled hard after the capitol of Japan was moved to Tokyo in 1869. Although the performance has a long history, each year the dance is different and this has made it very popular. Held from April 1st – 30th.

The dance is simply called Gion Odori (Gion Dance) and was first performed in 1953. The dance is known for for its original planning and composition. This performance is the only one in autumn and held from November 1st – 10th.