The first department stores in Japan were founded during the early 1900s. Their predecessors were kimono stores, which supplied various types of luxurious goods during the Edo and Meiji periods. Japanese department stores were largely successful for decades. However, they have been undergoing difficult times in recent years due to the economic slowdown since the 1990s, as well as increased competition from supermarkets and mass consumer retailers. 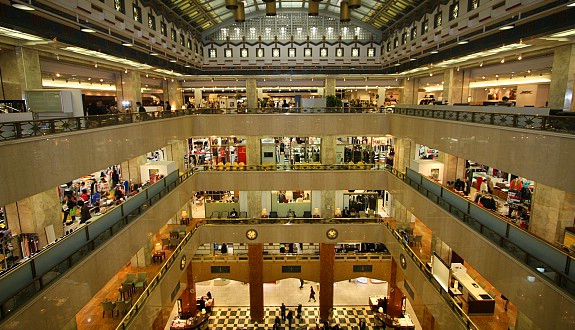 At a department store, shopping is divided into levels. The food department is almost always in the basement and can be an attraction by itself due to the wide variety of Japanese delicacies, sweets, desserts and other consumables on display. At ground level is usually the cosmetics department, where many famous international and local brands of cosmetics are represented.

Moving up, the first few levels are often women’s fashion, while men’s fashion and the sports department tend to be on the next couple of levels. Located above are usually one or two levels dedicated to interior and lifestyle goods, stationery and toys. These days, it is not uncommon for department stores to allocate shop space to private tenants as part of their efforts to reinvent themselves.

The top level is usually the restaurant floor, where multiple restaurants serving different types of Japanese and international cuisine can be found at a reasonable price. Most establishments showcase their menu items as food replicas in their window displays. Some department stores also have rooftop gardens open to customers, that may be used as beer gardens in summer.

Japanese department stores are famous for their unparalleled customer service. The constant greeting by the staff is a distinguishable feature. If you visit a big department store just before it opens, you would usually see its employees lined up neatly, waiting to welcome customers. The moment the second hand of the clock hits the opening time, the doors will be punctually opened, and customers can make a grand entrance being flanked by bowing and greeting staff.

The elevator women are another unique characteristic. They are female staff, neatly dressed in uniform with the task to tend to the elevators. They provide relevant information to customers as the elevator goes through the different levels and act according to requests by customers to alight at specific floors. Unfortunately, the number of elevator women has decreased in recent times, presumably due to cost cutting measures, but they can still be found at some of the bigger stores in Tokyo and Osaka.

Another element is the impeccable presentation of the goods, especially if they are bought as gifts. Products are usually already nicely packaged by the manufacturer in the first place. As gifts, they would be given an additional layer of packaging or some other decoration such as ribbons. They would then be placed in carriers bearing the name of the department store to demonstrates that the gifts have been obtained from a reputable source.

Opening hours are typically from ten in the morning to eight in the evening. The restaurants tend to open later at about eleven but also close later at night. Department stores are open on Saturdays, Sundays and national holidays as these are the most popular shopping days. Some stores are instead closed on one weekday per week or month. Many stores close on January 1.

At major department stores, foreign tourists are often able to get a refund on the consumption tax for purchases of over 10,000 yen (or 5,000 yen in case of consumable goods, such as food and cosmetics). Payment should first be made as usual, after which shoppers bring the receipts, purchased goods and their passport to a dedicated duty free counter in the store to receive their refund.

Another great all-around department store with a fabulous basement food floor and a superb restaurant floor.

Inside the Kyoto Station building, this is a good department store with two fine basement food floors.

Aeon Katsuragawa
A large shopping mall consisting three floors of shops and restaurants totaling to about 220 stores. A whole day can easily be spent here to shop for fashion and variety of goods. There are also an electronic store, movie theater, arcade, and ample amount of eateries. The mall is connected to JR Train Katsuragawa Station through a roofed walkway so the mall can be visited without an umbrella on a rainy day. There are many tax-free stores, just look for the symbol indicating tax-free in the stores.
Cocon Karasuma
Located in the midst of Kyoto’s banking district, this new shopping, dining and entertainment complex is always worth a look. The offerings range from books to furniture, with an art-house cinema and several restaurants in-between.
http://www.coconkarasuma.com/
Kyoto Yodobashi
Finding the Newest Electronics, Shopping For a New Outfit, and Eating a Delicious Meal All in One Place.
http://www.yodobashi.com/ec/store/0083/index.html