“Jōnan-gū, which literally means ‘the shrine south of the capital,’ was built south of the newly established capital, Heian-kyo, in 794 to protect the capital and ensure the nation’s peace. It enshrines the deity of the nation’s territory, the deity of bravery, and the female deity of safe childbirth and child rearing. Successive emperors and retired emperors visited the shrine to pray against calamity striking from inauspicious directions, and to pray for the peace and security of the imperial court.

As the guardian of construction, transportation and travel, Jōnan-gū continues to attract worshipers from around Japan seeking directional protection against misfortune. Many petition for safe sightseeing during their visit to Kyoto. The shrine grounds echo every day with the ring of the bells the shrine maidens hold as they perform sacred dances. The main shrine and other structures built in traditional styles engender the elegant atmosphere of the ancient capital.

Jōnan-gū’s extensive garden, Rakusuien, which covers approximately 30,000 sq. meters is striking, no matter the season. Kyokusui-no-Utage, which is held in the garden twice annually in the spring and fall, is a renowned event dating back to Heian Period and recreates the gracefulness of the times.

The Rakusuien garden, which completely surrounds the shrine buildings, is composed of five distinct gardens, depicting the evolution of Japanese gardens. A stroll through the garden is akin to walking through time. The garden has 150 plum trees, 300 camellia bushes and close to 100 maple trees. It also grows all the plants (over 80 kinds) that appeared in The Tale of Genji, the epic novel written in the Heian Period. Discover the Japanese love of nature; flora lies at the heart of the elegant Heian culture.”

The impressive tombs of Shirakawa and two other Emperors are nearby and can be seen while walking to the shrine from TAKEDA station. 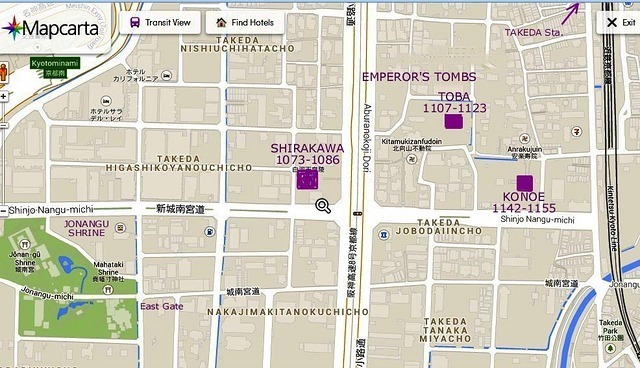