The Seven Lucky Gods of Japan, Shichifukujin, are an eclectic group of deities from Japan, India, and China. Only one is native to Japan (Ebisu) and Japan’s indigenous Shinto tradition. Three are from the Hindu-Buddhist pantheon of India (Daikokuten, Bishamonten, and Benzaiten)and three from Chinese Taoist-Buddhist traditions (Hotei, Jurōjin, and Fukurokuju).

Each deity existed independently before Japan’s “artificial” creation of the group in the 17th century. Images of the seven appear with great frequency in modern Japan. The Shichifukujin are an excellent example of the way Hindu, Buddhist, and Shinto beliefs live side by side in Japan, influencing one another, and even lending each other gods.

According to the Japanese legend, they travel in a ship called Takarabune which is filled with treasures and comes from sea to bring fortune and prosperity to everyone. It is said that if you leave a picture of the Shichifukujin below your pillow on the night of the last day of the year, you will be lucky and have good fortune the whole new year.

The Seven Gods of Luck and Good Fortune are:

Also known as Yebisu, he is the God of Fishing, Shipping and Commerce and is the only one to have his origins in Japan. Ebisu is very popular among the people who works in the food industry (farmers and sailors) as is commonly presented wearing formal court clothes or hunting robes. He is often presented with a fishing rod in his right hand and a large red sea bream under his left arm. The virtue he represents is Honesty.

Originally, he was a Hindu warrior deity named Mahākāla and once introduced in Japan he became the God of Wealth and Prosperity. He is well known for his happy-looking smile and is often presented with a bag on this shoulder filled with money and a magic mallet standing on two bales of rice. The virtue he represents is Fortune. 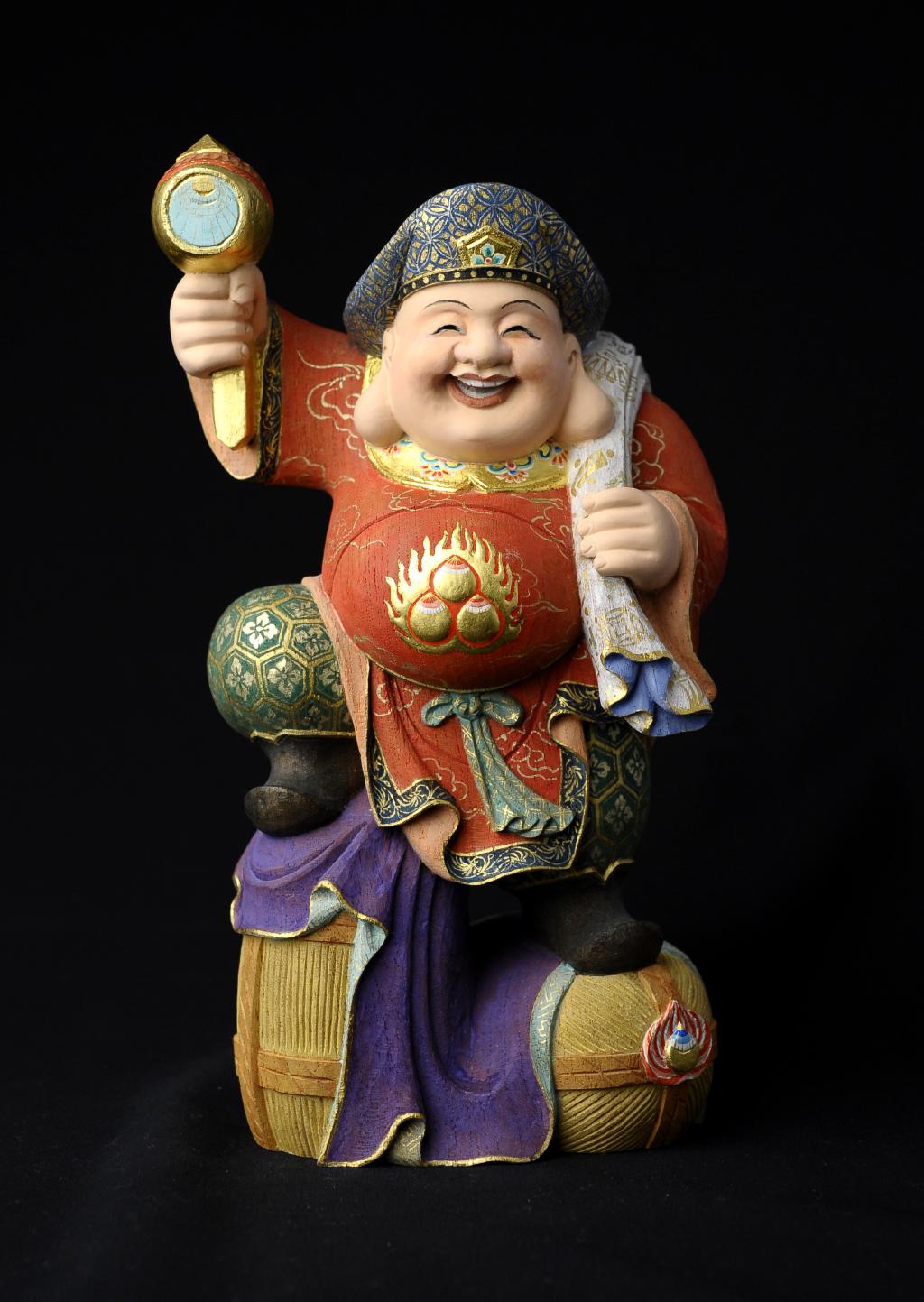 Also originally from Indian Buddhism, Bishamonten is the God of Warriors (not war) He is also a God of Defense Against Evil. Almost always dressed in armor with a fierce look and standing over one or two demons symbolizing the defeat of evil. In one hand he has a weapon to fight against evil influences and suppress the enemies. On the other hand he holds a treasure pagoda or stupa, which is his main identifying attribute. The virtue he represents is Dignity. 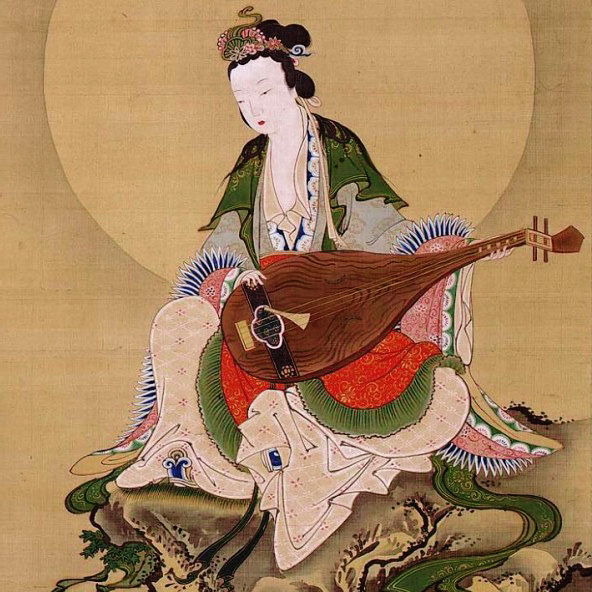 The only female of the Shichi Fukujin is Benzaiten (a.k.a Benten) and is originally the Hindu goddess of water. In its Japanese representation, she is the Goddess of Arts and Knowledge. Her common form is a beautiful woman dressed in a flowing Chinese-style dress and playing the biwa,sometimes the flute. The virtue she represents is Joy. 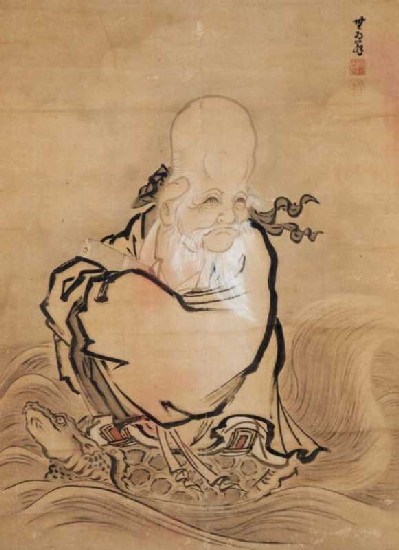 Brought from China’s Taoist-Buddhist traditions, Fukurokuju is the God of Wealth, Happiness, and Longevity. Represented with an elongated forehead and long moustache, he is usually represented with customary clothes of a Chinese scholar, holding a walking stick with a scroll tied to it. He is the only one from the seven that has the ability to revive the dead. The virtue he represents is Longevity. 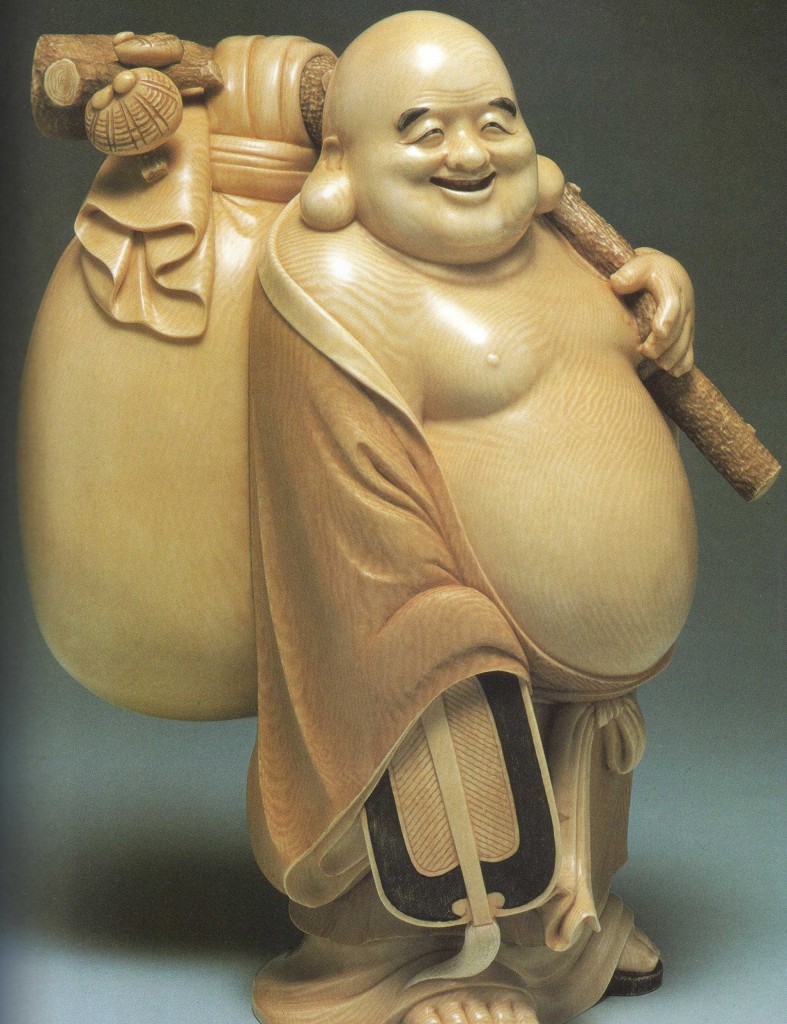 From Chinese beliefs, Hotei (a.k.a Budai) is the God of Happiness and Abundance. He is supposedly based on an actual person, a Chinese hermit Budaishi (d. 917).  He is represented as a Buddhist monk with a smiling face and a prominent belly, holding a sack and a wooden staff, usually seated or sleeping in his bag. Outside Japan, he is known as “Laughing Buddha”. The virtue he represents is Happiness. 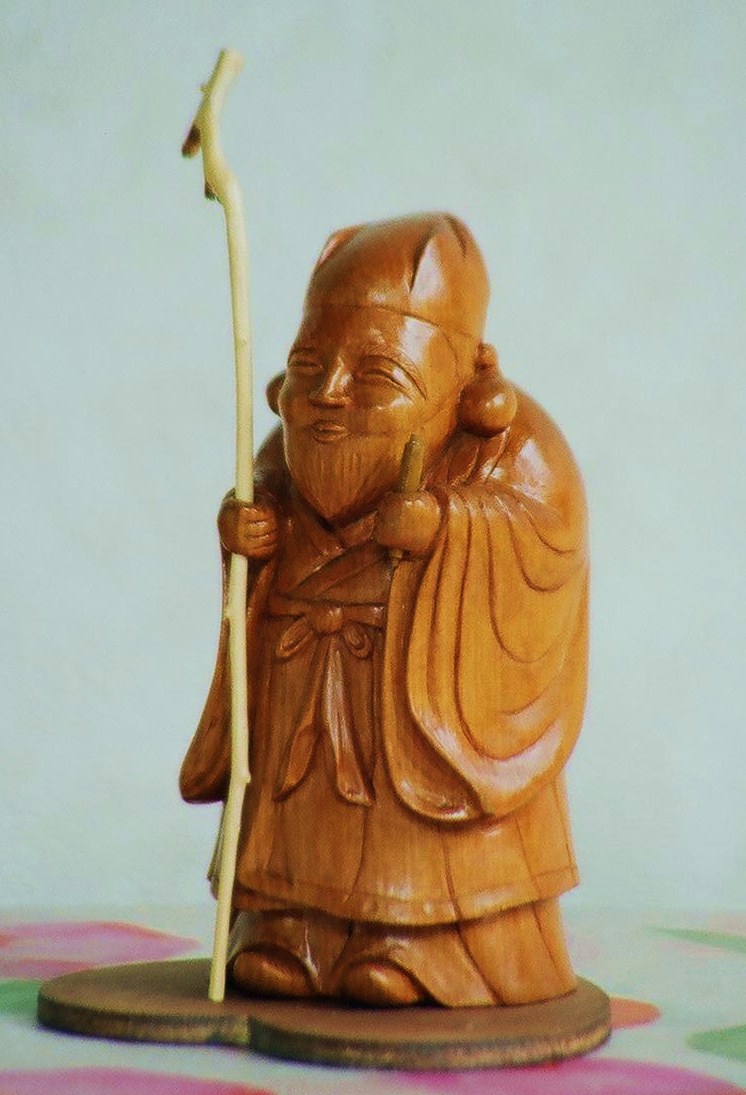 He is the God of Wisdom and is commonly presented as an old man wearing a hat with a long white beard holding a knobled walking staff with a scroll tied to it. He is often confused with Fukurokuju, as both are presented in a very similar way, though in Jurōjin a black deer always accompanies him as a messenger and as symbol of longevity. The virtue he represents is Wisdom.