Lions appeared in Indian temple art and, as early as the third century, showed up in Chinese Buddhist art. In those times, the lion was a symbolic protector of the dharma (the teachings of Buddha). Over time, they also became protectors of imperial gates.

The Chinese word for lion (statues included) is shi 獅 or shishi獅子, but there was another creature that appeared in China at around the same time called the xiezhi 獬豸. At some point between the third and seventh centuries, paired stone xiezhi also made their way to Korea, where the name was pronounced haetae or haechi. The haechi appears very lion-like, but often has a scaly body, a small horn on its head, and sometimes small wings. 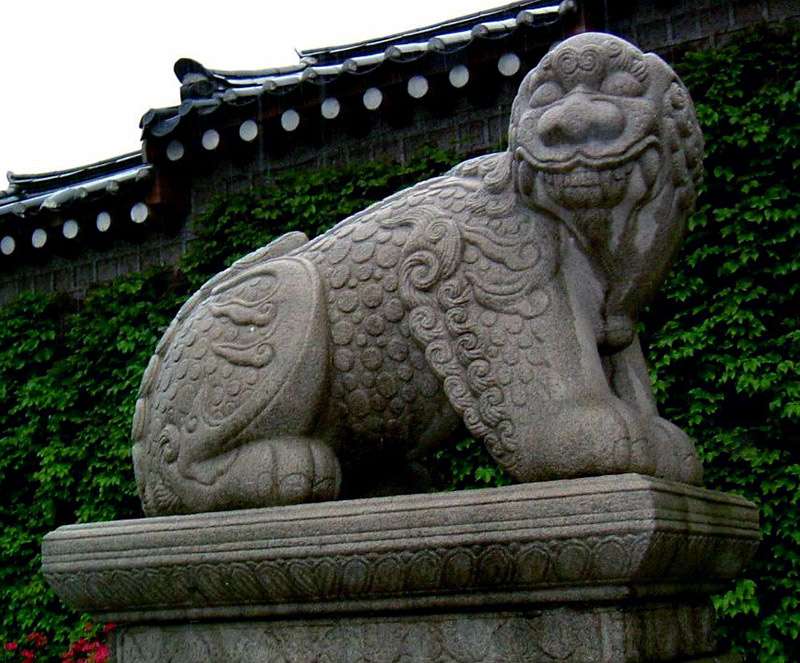 By the Nara period (710-794), lion guardians had come to Japan as well. Early on, they were usually made of wood and only used indoors. In the ninth century, a change occurred, and the pair came to consist of one open-mouthed lion (shishi 獅子) and one close-mouthed, horn-bearing, dog-like komainu. The name komainu itself means “Korean dog.” Given the name and its horn, it would seem that the komainu, at least, came from the Korean haechi. By the fourteenth century the horn disappeared, and both animals of the pair came to be known as komainu. At the same time, people started making them in stone and using them outdoors. 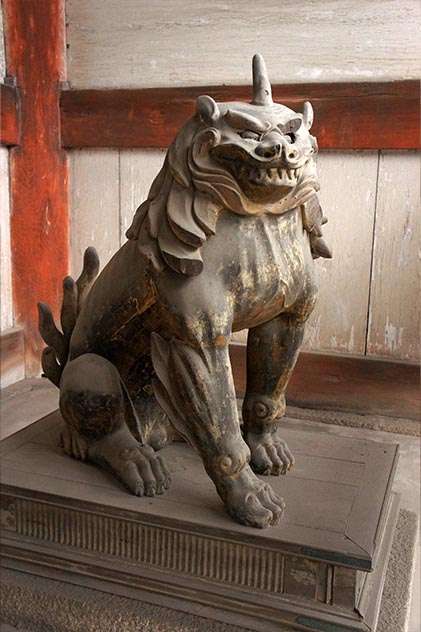 The shift from temples to shrines may be explained by the fact that they often shared grounds and, in trying to spread the faith, Buddhists often drew parallels between characters and symbols of their religion and those found in Japan’s native beliefs.

When seen in pairs, both in Japan and Okinawa, one lion usually has its mouth open while the other’s is shut. It’s no coincidence, but rather Buddhist symbolism. The open mouth is meant to be forming the sound “a” あ, while the closed mouth is forming the sound “un” うん. Combined, they form the word a-un, the Japanese rendition of the Indian word om ॐ. Originating in Hinduism and adopted by Buddhism, om’s meaning seems somewhat vague at times, but is sometimes described as the name of God or the sound of the vibration of the universe. At least in Japan, “a” and “un” are also symbolic of beginnings and endings, in the same way that Western countries use alpha and omega. It’s also sometimes said that the open-mouthed animal is male, while the other is female.

Komainu, sometimes referred to as lion dogs, the guardian statues that can be found guarding the entrance to Shinto shrines as well as temples or even secular sites, come in a massive variety of styles, shapes and forms.

From cute or comic to fierce and terrifying, short and chunky, tall and skinny, made often of stone but also bronze, iron, wood or even ceramic, they have never attracted the serious study that other types of Japanese religious statuary has had, but have been  an object of fascination for many with people traveling around the country searching out unusual examples.

There is even an association formed just for the study of komainu tails! When I am visiting new areas in Japan it is one of the things I search out and now have a library of thousands of different examples. 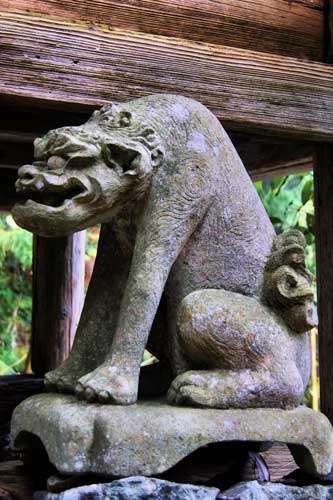 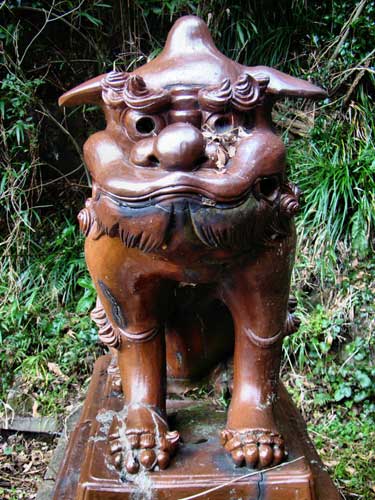 A ceramic komainu at an abandoned shrine in Hamada, Shimane

Komainu translates as “Korean Dog”- with Koma being the name for the ancient Korean kingdom of Koguryo, but many in Japan say that really it just means “foreign” suggesting obviously a Chinese source, however some of the earliest examples of komainu are found at a shrine in Izumo, a region that has very strong ties with the Korean peninsula, so it is quite possible that, like Buddhism itself, Korea was the original source, however elements within Japan continue to downplay that possibility.

There is a very obvious connection between Komainu and the Chinese Guardian Lions, often erroneously called Foo Dogs in English, and the original source of these is probably India or even points west, possibly even Egypt. Interestingly a few African lion statues have made an appearance at shrines recently. Like the fierce Nio statues found at many temples, and like the fox statues found at Inari shrines, the function of komainu is to protect the site by keeping evil at bay. 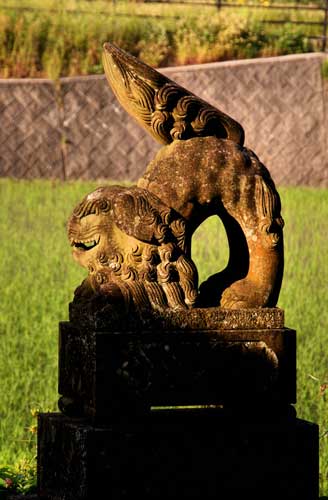 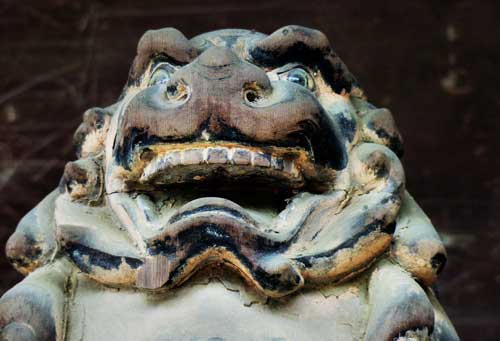 The most common form that komainu appear in nowadays are the stone ones guarding the approach-ways to shrines, though this is in fact a relatively recent development with the vast majority being made in the late Edo Period.

Until then most komainu were made of wood and were kept undercover or indoors. Examples of these kind can sometimes be seen on the porch of the honden (inner sanctuary), at the back of the heiden (offerings hall), or paired with zuijin, another kind of shrine guardian, in a zuijinmon (guardian gate).

There are very obvious differences in styles between those komainu found at major shrines, where bronze is more common, the scale is often much larger, and the works executed by more skilled artists, than those found at smaller, poorer, rural shrines, where they will often be made by local stonemasons, however it is here you will find far more diverse and unique styles.

There are several regional styles named after the areas they originated, Naniwa, Edo, etc and perhaps the most distinctive is the Izumo style where the Komainu are not sitting but crouching with their rears in the air as if about to spring forward. Unfortunately many new komainu are now being made in something called the okazaki style, and this is a new, national style and the wonderful diversity is beginning to disappear. 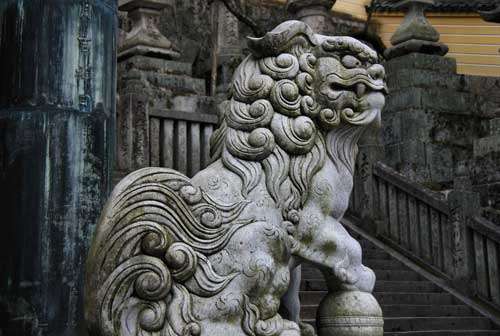 Komainu come in pairs, often one male and one female, though male-male pairs are not uncommon. Sometimes one will have a single horn. In the Heian Period these were called komainu and the hornless ones were called shishi, lions, though nowadays both are referred to as komainu.

As if that is not enough variety, in some places you will find komainu with offering coins in their mouth or on their paws, in many places they will have bibs around them like Jizo statues, and in Nagasaki there is one with paper fortunes, omikuji, tied around its legs, at Suwa Shrine. All in all, if you start to look, you should find it difficult to find two komainu that are not different. 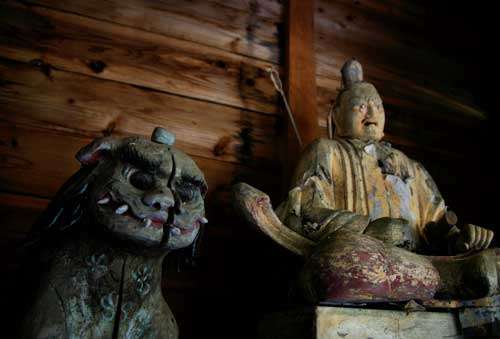