The Seven Historic Districts of Kyoto

Two of Kyoto’s most attractive streets are Sannen-zaka and Ninen-zaka, a pair of gently sloping lanes that lead down from Kiyomizu-dera Temple toward Nene-no-Michi Lane.

Lined with beautifully restored traditional shophouses and blissfully free of the overhead power lines that mar the rest of Kyoto, Sannen-zaka and Ninen-zaka are a pair of pedestrian-only lanes that make for some of the most atmospheric strolling in the whole city.

In fact, it’s here that you are most likely to be able to imagine what Kyoto looked like before modernity descended in full force. You’ll find plenty of restaurants and teahouses to refresh yourself as you explore, including the single most atmospheric teashop in the city Kasagiya. The only caution is this: During cherry blossom season, these two hills will be utterly crammed with people. In this season (and any other time of year), an evening stroll is highly recommended.
Read more…

2) Gion Shinbashi district Kyoto’s traditional entertainment district, where geisha, gangsters and gawkers prowl, is one of the most interesting places for an after-dinner stroll. Top choice area in Southern Higashiyama. Gion is the soul of Kyoto. A timeless district, it has preserved the customs and the appearance of medieval Japan. Shinbashi dori marks its northern boundary.

No neon here: only the dim glow of paper lanterns illuminates the dark wood of the stop fronts. The pedestrian street invites visits on a journey through time. It is lined with many machiya, traditional urban dwellings and authentic ochaya.

But don’t get confused. If the term ochaya literally means “tea house”, it actually refers to institutions where geisha serve and entertain clients. Access is often reserved to a number of handpicked regulars. The famous drink is only one among many here. It is the chashitsu that host tea ceremonies.

Strolling along the Shinbashi dori allows those who are not part of the kyoto elite to see geiko (the local name for geisha) before they disappear in a rustle of cloth. When night falls, evening visitors stroll dreamily on the polished cobbles to the Shirakawa River, to contemplate its course for a moment, before leaving to lose themselves in the city.
Read more…

North of central Arashiyama the atmosphere becomes less touristy and more rural, with several small temples scattered along the base of the wooded mountains. The area north of the Togetsukyo Bridge is also known as Sagano, while the name “Arashiyama” technically just refers to the mountains on the southern bank of the river but is commonly used to name the entire district.

Arashiyama (嵐山) is a pleasant, touristy district in the western outskirts of Kyoto. The area has been a popular destination since the Heian Period (794-1185), when nobles would enjoy its natural setting. Arashiyama is particularly popular during the cherry blossom and fall color seasons.

The Togetsukyo Bridge is Arashiyama’s well known, central landmark. Many small shops, restaurants and other attractions are found nearby, including Tenryuji Temple, Arashiyama’s famous bamboo groves and pleasure boats that are available for rent on the river.

One of the most enjoyable and convenient ways to travel around the Sagano area is by rental bicycle, which are available for around 1000 yen near the train stations. Cycling through rural residential areas and past fields while traveling between temples can be one of the most enjoyable parts of a visit to Arashiyama. There is also an attractive preserved town area near the Adashino Nenbutsuji Temple.

Arashiyama becomes most attractive (and busy) around early April and the second half of November when the cherry blossom and fall color seasons usually peak. During the summer months, traditional cormorant fishing is practiced on the Hozu River for tourists to watch. Another good time to visit is during December’s Hanatoro illumination, when lanterns line the streets and bamboo groves.
Read more…

Historical residences of Kamigamo: In the east of Kamigamo Shrine there is a line of residences along Myojin River ( the stream running out from Kamiganmo Shrine ) previously lived in by Shinto priests who used to serve at Kamigamo Shrine. The town of these historical houses is called Shake-machi (社家町).  The term Shake (社家) consists of the Chinese characters for “Shrine” and “Family, House”. This is one of Preserved Districts for groups of Historic Buildings in Kyoto. Those signiture earthen walls of exterior are called (土塀 – dobei).

In some shrines, the position of the head priest has been passed on in the same family from generation after generation and those families have often lived close to the shrine and an entire quarter full of Shake has grown over time. This is how Kamigamo Shake Machi was originally formed. It was until the early Meiji period, this custom has been common practice in Japan. But due to misuse of authority and nepotism   権力の誤った使い方と身内びいき,  the practice was ordered to be discontinued in 1872. Ever since the houses were officially separated from the shrines, but the families continued to live in them. There used to be more than 300 houses here during the Edo period, now there are only 30 left. Only Nishimura-Ke ( House of Nishimura family 西村家) and the house of Tsuda family （津田家） are open to the public on a regular basis.

Kyoto has hundreds of fascinating sights to explore, scattered over several distinct districts, each with their own atmosphere and ambience. Here’s our overview of Kyoto Districts to help you plan your visit. This list of Kyoto districts is in very rough order of importance – follow the links to find out more about the temples, tourist attractions, shops, restaurants and bars located in each area.

Click a Kyoto District for detailed info on attractions, places to eat and accommodation 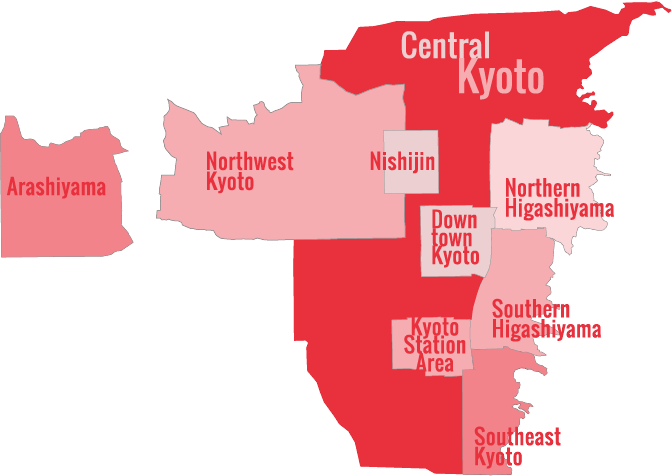 Southern Higashiyama is the most important sightseeing district in Kyoto. It contains everything from dazzling temples, to preserved lanes, to the city’s main geisha district. Don’t miss it! Read More

The Northern Higashiyama Area is one of Kyoto’s most important sightseeing districts. It’s less crowded than Southern Higashiyama but it contains at least as many first-rate sights, including fantastic temples, shrines and lots of greenery. Read More

Downtown Kyoto is loaded with hotels, shops, restaurants, bars and clubs. It’s not a main sightseeing destination, but there are some good sights scattered about. Read More

Central Kyoto contains two of the most important tourist sites in the city: the Kyoto Gosho (Imperial Palace) and Nijo Castle, as well as a few smaller sights and attractions. Read More

Nishijin, Kyoto’s famed weaving district, in the northwest part of central Kyoto, is one of the most traditional areas – it’s a great place to see machiya (old Kyoto townhouses). Read More

The Northwest Kyoto Area is a bit of a hike from downtown or the station, but it contains several of Kyoto’s most important sights like Kinkaku-ji Temple (the Golden Pavilion), Ryoan-ji Temple (with its famous rock garden) and Myoshin-ji Temple. Read More

Arashiyama is the second-most important sightseeing district in Kyoto. It’s filled with temples and shrines, but the star attraction is the famed Arashiyama Bamboo Grove. Read More

Southeast Kyoto, at the far southern end of the Higashiyama Mountains, is home to two of Kyoto’s greatest sights: the Shinto wonderland of Fushimi-Inari-Taisha Shrine and the Zen world of Tofuku-ji Temple and all the subtemples that surround it. Read More

Kurama and Kibune are a pair of tranquil rural villages and easy and scenic 30-minute train north of Kyoto on Eizan Line. They form the best half-day trip out of Kyoto. Read More

Ohara is a tranquil rural village in the mountains north of Kyoto, about an hour (20 kilometers) from Kyoto Station by bus. In addition to several fine temples, the village is perfect for leisurely strolling. Read More

Takao is a lovely village in the Kitayama Mountains about 15 kilometers northwest of Kyoto. It rivals Kurama & Kibune as the single best daytrip out of Kyoto for nature lovers. Read More

About 15 kms southwest of Kyoto, and easily accessed by both the Keihan Line and the JR Line, Uji is famous for the lovely Byodo-in Temple (the temple on the back of the Y10 coin). It’s also famous as a tea growing area. Read More