It looks like a cloud of smoke
But as I come closer
To the old house
In this ancient village
I see it is billowing willow.
–Rengetsu

Farmers made up the majority of Japan’s population into the Meiji Period (1868-1912). Different farmhouse construction styles developed according to widely varying weather patterns. However, architectural similarities can be seen between dwellings across the country, such as the wooden facades, thatched roofs, sunken hearths (irori), earth floors for stable and kitchen, and living spaces on elevated wooden floors that may have included some tatami rooms in case of the more well-off families.

Farmhouses were the most numerous among the old buildings but were rarely preserved, and thus the remaining ones that we see today tend to be the more prestigious ones, such as those that belonged to village heads or those in remote locations such as Shirakawago and Miyama where entire villages have been preserved to a certain degree. Open air museums are also good places to see regional styles of farmhouses. 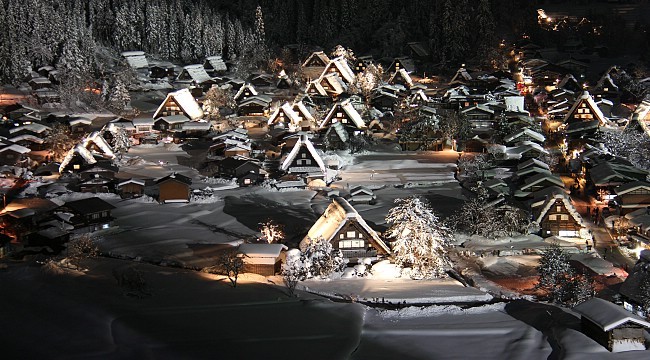 Besides shrines and temples, many old buildings can be seen quite naturally in Kyoto. They have survived through a venerable long history of Kyoto.

The Minzoku Shiryokan (Folk Museum) is a symbol of northern Miyama, designated by the national government as an important building group preservation district. Exhibited here are some 200 items, including tools and implements traditionally used by the local people, including farming tools. In the main building there is an exhibit of tools and implements used in everyday life, including old-fashioned lanterns and box pillows. The museum was destroyed by fire in 2000, but was rebuilt in 2002.