The Jidai Matsuri is a festival that takes place every year on October 22, the anniversary of the foundation of Kyoto. It consists of a large parade that travels from the Imperial Palace to Heian Shrine. Jidai Matsuri is Japanese for “Festival of Ages”, and the participants of the parade are dressed in accurate costumes from almost every period of Japanese history, as well as famous historical figures. There are about 2000 participants and it takes two hours to watch the entire procession pass by.

The Jidai Matsuri is held by Heian Shrine, and both the festival and the shrine were established in 1895 to celebrate Kyoto’s history and culture. A few years before in 1868, the capital was moved to Tokyo after having been in Kyoto for over a thousand years. Despite its short history, the Jidai Matsuri is one of Kyoto’s three most famous festivals, along with the Gion Matsuri in July and the Aoi Matsuri in May. 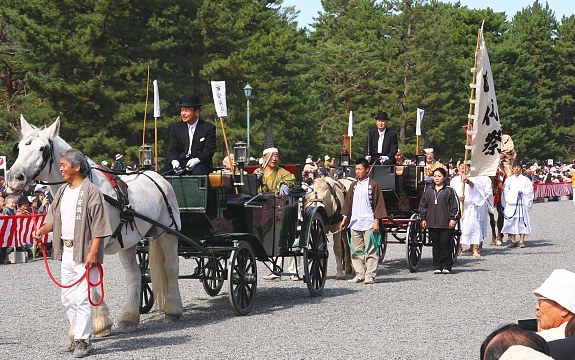 The historical costumes and characters that are displayed in the parade cover the approximately 1100 years during which Kyoto was the national capital. The procession is separated into historical eras and then further separated into themes, of which there are about twenty. The parade begins with characters from the Meiji Restoration in 1868, and then continues in reverse chronological order until the beginning of the Heian Period in 781.

At the very head of the parade there are the festival’s honorary commissioners, riding in horse drawn carriages in the style of the mid 1800s. The commissioners include figures like the governor of Kyoto Prefecture, the mayor of Kyoto City and the city council chairman. Following them are figures of the Meiji Restoration. There is a marching band with drums and flutes and soldiers who would have fought with the imperial forces, as well as some of the era’s most notable figures, such as Sakamoto Ryoma.

The largest group in the parade depicts the extravagant convoys sent by the shogun to represent him at important imperial ceremonies in Kyoto during the Edo Period (1603-1867). The three most important officials ride on horseback, and there is also a palanquin carried by attendants that the officials would use when traveling. Afterwards there is a much smaller group that consists of about a half dozen famous women from the period, including a princess sitting on a wheeled platform.

As the parade continues, spectators are able to see the armor of Oda Nobunaga and his commanders, the dress of warriors and common people of the Muromachi Period (1338-1573), more famous historical women and nobles of the Heian Period (794-1185). The costumes and characters of the military, cultural, aristocratic and common people are all put on display.

The very last group of the parade is the most important in terms of Shinto rituals. A large number of attendants accompany and carry two mikoshi (portable shrines) that contain the spirits of Emperor Kammu and Emperor Komei, respectively the first and last emperors to reside in Kyoto. Heian Shrine is dedicated to the two emperors, and their spirits normally reside in the shrine. However, during the Jidai Matsuri the spirits are able to travel through the city in the mikoshi.

The entire route of the parade stretches about five kilometers. Crowds become most dense at the Imperial Palace and on the approach to Heian Shrine, where spectators may want to get a spot early. In addition to the regular viewing areas lining the parade route, there are also sections of reserved seats at the shrine, the palace and on the streets. Details on the reserved seats are written below. 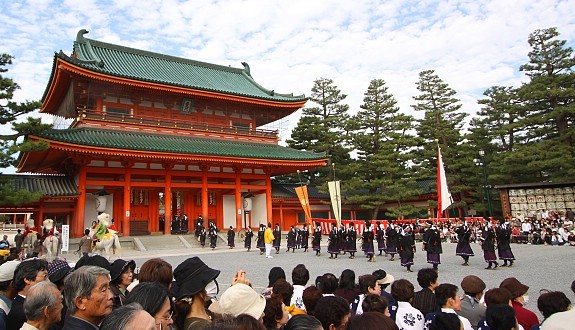 The marching band of the Meiji Restoration reaches Heian Shrine

The procession departs from the Imperial Palace, travels along Oike Street and Sanjo Street, and finally terminates at Heian Shrine:

There is some paid seating at the Kyoto Imperial Palace, in front of Kyoto City Hall and along the approach to Heian Shrine. Each seat costs 2050 yen, includes a pamphlet about the festival, and can be purchased beforehand at convenience stores or JTB travel agencies.